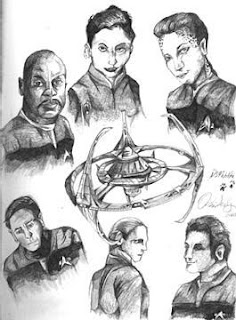 In 1993, on this very day, Star Trek Deep Space Nine was first aired on television. It ran for seven glorious years and like many trekkies or trekkers, I hung onto every word. I didn't have cable, so for me, I had to wait until midnight, Sunday night to watch. I had to be to work 7 am on Mondays and with two children at the time, up a lot earlier, yet I never missed an episode! I remember when Jadzia and Worf were married. I remember at Jadzia's Bachelorette party when she told of Sirella, (man she was a bitch though.) And when Jadzia died, I cried. I wanted to take that big, cuddly Klingon into my arms and hug him. And when Nicole deBoer took on the role of Dax, I was prepared to hate her. Of course I ended up loving her character as much as all the others.

To this day, my husband and I love the show. We embarrass my daughter by talking as though the whole world of Trek were real. My husband is a Ferengi. Anyone that knows him will understand. Of course I am a Trill. My screen name, Jezri, is a combination of the names Jadzia and Ezri.

I miss the show and would love to see a reunion, but considering they haven't even bothered to consider a movie with the cast, that was, in my opinion, the best Trek cast in the history of the show. There were so many inside jokes between the characters that only someone who followed the show would understand. For instance, when Kira was pregnant with the O’Brian’s baby and was having her Bajoran sneezing fits, she told Julian it was his fault she was even pregnant. Startled, he asked how and she said because he was the one that talked her into carrying the baby. However, in real life, Nana Visitor, (Kira) was pregnant and Alexander Siddig, (Julian) was the father. I almost choked, laughing at the joke.

Deep Space Nine was a wonderful example of humanity, even in the characters that were not human. One of my most memorable scenes was between Kira and Damar, in which Damar found out his family, had been killed by the Dominion. "What kind of people kill innocent women and children?" he had asked. Kira looked at him and said, "You tell me." Of course Damar realized and probably for the first time, what exactly his people had done to the Bajoran's. It was like a double whammy.
In honor of Deep Space Nine, the greatest Star Trek series ever, please enjoy my short dialogue story entitled, Rule Two-Eighty-Four.
Rule Two-Eighty-Four

“What is it this time Mister Davies?”

“I just had ANOTHER customer complaint about you.”

“Another? Oh dear me? You Hu-mans are so tiresome, always complaining about something. What was it this time?”

“You refused to give a customer her money back when she came in to return the holo-projector she had purchased last week.”

“It was damaged! We never would have been able to resell it.”

“It being damaged was the reason she wanted to return it! Wal-Mart policy allows this. I don’t know why I have to keep explaining this to you.”

“Rules are always subject to interpretation.”

“Brax, turn around and read to me the sign above your head. The one that states our return policy.”

“Items may be returned for a refund within 90 days of purchase with a receipt.”

“Okay, stop. How is that subject to interpretation?”

“With a ferengi, rules are always subject to change.”

“Not Wal-Mart rules. We haven’t remained in business for over 300 years by changing our interpretation of how to do business.”

“Honestly, I don’t know how you stayed in business so long with policies like this. The first rule of acquisition states, Once you have their money, you NEVER give it back.”

“Brax, I am losing my patience with you. I promised Grand Nagus Rom that I would help the ferengi learn how to function in a free market, but I’m beginning to think it’s impossible!”

“Grand Nagus Rom is going to be the ruin of Ferenginar! Do you know he takes advise from his. . . his wife?!? The ninety-fourth rule, females and finance don’t mix!”

“I know Leeta. She is a brilliant business woman.”

“Then there was the problem the other day, when you sold the gentleman a product meant for hair growth and told him it would, um, enhance other areas of his person.”

“The man is a Bolian and is now covered with so much hair, you can’t even tell that he is blue! He’s shaved three times and the hair won’t stop growing.”

“Rule nineteen. Satisfaction is NOT guaranteed.”

“Brax, if you do not start following Wal-Mart policy I’m afraid I will have no choice but to let you go.”

“I do not want your advice!”

“Brax, we do not operate business by the former Ferengi rules of acquisition!”

“Nonsense! You know the rules of acquisition are sound advice. Besides, there’s rule two -eighty- four.”