Know What You're Buying

Know What You're Buying
By Lisa McCourt Hollar 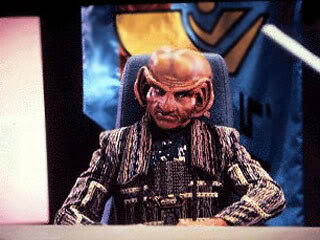 Azia Teb glared angrily at her view screen, hardly believing the gall of the ferengi who had appeared there only a few moments ago.


"Well" the ferengi asked, "do we have a deal? I will tow your ship to the nearest space dock in exchange for ten strips of latinum?"


"You have got to be kidding me," the trill said, maintaining a low, even voice, despite the anger brewing below the surface.


"It's really quite a bargain," the ferengi continued. "Anyone else would charge fifteen slips. I'm giving you a break, considering our prior business relationship."


I warned you not to do business with a ferengi."


"Prior business… Brom, you sold me the damn ship three days ago. You should tow me for free, then refund the latinum I paid you for this bucket of bolts!"


"Refund your latinum?!?" Brom yelped, looking appalled. "What for? You got what you paid for!"


"I paid for a running spaceship. This ship is clearly not running."


"Clearly," the ferengi said, "however it was when I sold it to you. And as I recall, you were looking for a ship that would get you to Terrelis Prime. Did you make it?"


"Then you got what you paid for."


Azia closed her eyes, Teb's chuckle echoing in her head. She'd been joined with the symbiote for a year now, but she didn't think she would ever get used to its sense of humor.


"One would expect," she said, trying to keep her anger in check, "that the ship one bought only three days ago would last longer that one trip to Terrelis Prime."


"Then one should have specified that." Brom said. "You asked for a ship that would get you to Terrelis Prime AND you wanted to make the journey within two days. It would have taken most ships three days to make it there from DS9. The only thing faster would have been a federation ship, and they weren't authorizing you the use of one, were they?"


"Still..." the trill said, not wanting to back down from her argument, even though she knew he was right. The Federation had refused to allow her the use of any Federation ship, citing their damn peace treaty. It was he friend Kira Nerys who had suggested she speak to the ferengi bartender, suggesting he might know someone who could help her. But once again, the ferengi interrupted her before she could get her argument out.


"I delivered on my promise. It's not my fault you didn't observe the two-hundred-eighteenth rule of acquisition."


"And what is that?" Azia asked icily, while Teb groaned.


"Always know what you're buying. You got to Terrelis Prime within two days, just as you had requested. You should have realized that driving a ship, any ship, of that size, at speeds exceeding the recommended warp speeds would have serious, detrimental effects on the warp drive. You're lucky the ship's hull held up under that kind of pressure. Now do we have a deal? I will tow your ship in exchange for eleven slips of latinum."


"ELEVEN SLIPS! Just a few minutes ago it was ten!"


"My price went up. It is still a bargain though. I suggest you take it before it goes up again."


"Brom, you...you...ARGH!" Frustrated, Azia pounded her fist on the console, terminating the link.


I did warn you not to do business with a ferengi.


No ferengi comes highly recommended. If he does, it should be considered with suspicion, especially when said recommendation comes from another ferengi.


"When we get back to DS9, I'm going to strangle that barkeep."


If you must. What have you learned from this?


"Never trust a ferengi who uses the word honest in his vocabulary."


Technically he didn't lie to you.


"No," Azia grudgingly conceded, "but how convenient for him to be out here, in the Gamma Quadrant...with a P'rom class vessel just as my warp drive went off line."


You still have thrusters.


"Without warp it will take me two years to reach the worm hole."


You could always contact the Federation. They could send a ship.


Azia rolled her eyes, even though the symbiote couldn't see it. She knew that with their link, it would register the connection. "Yeah and they could have lent me a Federation ship, but they wouldn't."


Screwing up her face in an imitation of Admiral Ross she recited, "Terrelis Prime is located deep within the Gamma Quadrant and is subject to Dominion rule. The war is over Lieutenant Teb, we can't risk starting a new one. Unless the Founders contact us and ask for assistance, we must honor our treaty and stay on our side of the wormhole. I'm sorry lieutenant, the Federation can't get involved...no matter how much we may want to." Frustrated, Azia, again, slammed her fist on the console. "And so an entire race is condemned to die just so the Federation could honor a piece of paper. And for what? No one's heard from the Dominion since the war ended. They might not even care. That constable, what's his name...Odo, he went in there with them. He's supposed to be communing with them. Surely they would have understood."


And they may not have. If the war were to start again, it would be costly. And Admiral Ross did offer to try and contact Odo and get permission for the Federation to enter the Quadrant.


"By the time any answer would have come, it would have been too late. The Terrelians would have all been dead."


Well then, be grateful the peace treaty allows for civilian ships to enter the Gamma Quadrant.


Azia snorted. "I never imagined when I applied to the Symbiosis Commission, that I would be joined with a symbiote that sounds like a Vulcan. In fact, I never imagined I'd be having conversations with my symbiote. For some reason I thought being joined would mean I would have all the memories of the previous hosts, but that you would be, well, quiet. Shows how ignorant I am, doesn't it?"


Not ignorant, misinformed. Not all trills have the same experience with the joining as others do. Zarina, my second host, was so caught up with the memories she'd received from my first host, Cort, that she completely ignored my synaptic inputs. She was quite impulsive. I recall once trying to warn her about digesting Denebian Slug Wine, but she insisted on trying it. She had the worst headache of her life when she woke in the morning.


"I remember that!" Azia laughed. "The stuff was horrid, but Zarina remembered how Cort had drunk some with an Andorian Ambassador and how Cort had felt as though he were floating. She wanted to experience the sensation herself."


And somehow she had forgotten that Cort had taken a pill before drinking the brew, one that counteracted the effects of the mold that Denebian slugs produce.


"Please don't remind me. Just the thought of it makes me head throb."


"The Terrelians will live. All because you got there in time with the medication."


Azia sighed. "True." She waited for Teb to add something more, but for once the symbiote was quiet. Azia sighed again, then hit the button, reopening communications with the thieving Ferengi.


"I have given your offer some consideration and have concluded that it is one I cannot turn down."


"Excellent, excellent! I will transmit the agreement for you to sign, you know, all that legal mumbo jumbo allowing me to tow your ship; releasing me from any liability should there be any damage during transit. You sign it; transfer to me the twelve slips of latinum..."


Azia snarled, sounding much like a Klingon then said between gritted teeth, "Fine, twelve slips of latinum."


Brom smiled. "Very good! Once the transfer is complete we can be on our way. It has been a pleasure doing business with you."


"I bet!" Azia grumbled, "Just transmit the agreement. The sooner we get out of here the sooner I never have to see you again." Ending the call, Azia sulked, waiting for the ferengi's transmission. "When we get back," she growled, "I am going to learn every single one of those damned ferengi rules! Stop laughing Teb!"