A few months ago I joined in The Cannibal Cookoff on Indiehorror.org.  I wrote a short story called The Carnival.  Lucy stuck with me, so about a month ago I went back to the drawing board, so to speak, and rewrote The Carnival, adding more to Lucy's story and how she came to fall for Tom's seduction.
I have finished my re write and edits and it is now available on Amazon for Kindle.  For your enjoyment, I have included an excerpt. If you like it, you can click here

to find it on Amazon.
The Carnival
by Lisa McCourt Hollar 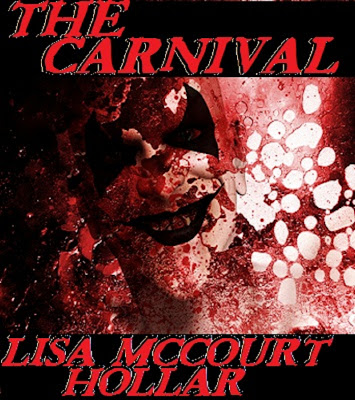 Lucy felt she must be dreaming as Katrina helped her put on glittery makeup and jewelry, even helping her dress in the most elaborate costume.

“I’m not actually going to be expected to perform,” Lucy asked, wondering what the point of all this was. She felt as though she’d fallen down the rabbit hole. If Katrina offered her a cake to eat and shrunk her down to the size of a mouse, she’d be less confused than she was now.


“Oh no, you just need to stand there. You’re going to be a part of Rindini’s act.”


Katrina laughed, “Don’t worry, Rindini never misses, he’s the best there is. Okay, it’s almost time, let’s go.” Katrina opened the door to the trailer and motioned for her to follow. Lucy did, feeling a little apprehensive, but also thinking that if this was Tom’s idea and he said it was okay, then it must be. She loved him and if it meant joining a carnival to be with him, then she would do it.


A few minutes later, strapped to a giant board, she began to wonder about her own sanity. “Don’t worry,” Katrina said, tightening the straps on her wrist, “Rindini never misses.”


“I’m not really so sure about this,” Lucy said, trying to pull her arm loose. Katrina laughed, smiling while slapping Lucy’s wrist, warning her to be still.


“The board spins,” Katrina said. “You don’t want to come loose and fall off.”


Lucy struggled, trying to understand what Katrina was saying. When the woman had smiled, Lucy saw a row of teeth that looked more suited to those of a cat, not a human. The canines looked razor sharp. Surely they were fake, a part of whatever act she performed, Lucy thought. Tearing her eyes from the teeth, Lucy looked at the woman, confused.


“You’ll be fine,” Katrina said, touching Lucy’s cheek with the tips of her finger. Her fingers stroked across her face, the feathery touch sending chills throughout Lucy’s body. Something about this didn’t seem right.


“Where’s Tom.” Lucy asked, trying to look around the woman. Lucy was beginning to panic and Katrina was creeping her out, looking at her with a strange gleam in her eye.  “Does he know about this?  Tom can’t expect you to spin me. It’s not good for the baby.”


“He knows,” Katrina said, leaning her face close to Lucy as though ready to whisper a secret. Breathing in her ear, Katrina sighed, inhaling deeply. “I can’t wait to taste you,” she said, her voice filled with a desire that chilled Lucy’s soul. Then the woman kissed Lucy, forcing her tongue into her mouth. Lucy struggled against her mouth, trying to pull away, then her eyes popped open, feeling the teeth, which were as sharp as they looked, sink into her tongue. Pulling back, Katrina smiled, revealing part of Lucy’s tongue still in her mouth.


Lucy tried to scream, her jaw moving up and down, her breath coming out of her mouth in rapid gasps. Pain shot through her body, her mouth feeling as though it were on fire.  Everything around Lucy seemed to slow down, more than likely a result of shock setting in. Fear and disbelief filled the young girls eyes as she witnessed Katrina push the end of her tongue back into her mouth and begin to chew.


At first Lucy couldn’t do anything but gasp, trying to fight past the pain, but then when Katrina swallowed her tongue, she pulled in a deep breath and screamed.  The sound of Lucy’s fear seemed to be the cue for the start of the show. There was a roar of applause from an audience she couldn’t see and then the curtains went up.