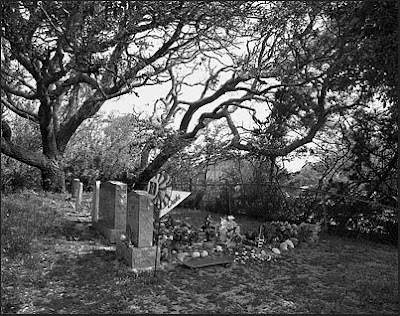 After it was over, I broke the shackles around Martha’s wrists, snapping them like bits of plastic. Kicking a few of the human scavengers out of the way, I lifted her lifeless body off the ground and turned to leave the chamber.  A few of the less wary among the human pillagers tried to swipe her from my arms, but I sent them flying, some hitting the wall with a sickening crunch.  I knew they were hungry, but I wasn’t going to let them feast on Martha.


Linda stood between the opening to the feeding chamber and the rest of the catacombs.  Her arms were folded and if I weren’t already dead, the look she gave me would have shriveled my soul and killed me where I stood.  As it was, I had drunk Martha’s blood and I now knew the secrets that my neighbor had kept from me all these years. How it must have pained Martha to live so close to a monster, such as my daughter.  How blind I had been that I had failed to see past her pigtails and innocent smile.


“We will talk when I return,” I said, indicating that I wished for her to remove herself from my sight.


“You can’t take her back to her home,” Linda sneered, showing her contempt for me. “Her disappearance has probably already been noted.”


“Then where are you going,” Linda asked, confused.


“To give her a proper Christian burial,” I said, staring my daughter down. Linda looked at me, first as though she thought I had lost my mind and then burst out laughing, the hatred and loathing she had felt towards my God all these years spilling out.


“A proper Christian burial? Father, you are dead and I don’t think, considering your current state, you are authorized to perform burial rights. Your days as God’s lackey are over.”


“Out of my way,” I said, struggling to keep my anger towards her out of my voice.


“I cannot allow you to endanger my coven,” Lucas said, putting his hand on my arm. I turned to look at him, the look in my eyes reminding him I had just killed three of his servants and even though he could probably take me, it wouldn’t be without considerable cost to his personal, wellbeing.


“I assure you,” I said, my voice strained, “I will do nothing to put this place in any danger.”


Lucas and I stared at each other a few moments, then sighing he let go of my arm and ordered Linda to step aside. She did so, grudgingly. Behind me I heard Veronica move to follow, then stop as Lucas spoke, “Don’t. He needs this time alone.”  For once I was grateful for his interference, though I don’t believe it was done out of kindness, but a resignation that he had been unable to bow me by taking Martha.


I carried her down the hill and to the cemetery where my wife was buried next to two empty graves.  I lay Martha on the ground, and then began the task of digging up the ground.  I knew it was best if Martha’s body not be found. If evidence of Vampire activity were to be discovered in Fairview, there was no telling what would happen.  More innocent people would be killed. The vampires would continue living. I didn’t like Lucas, nor his method of keeping human’s captive, so that the coven could feed at their leisure, but I could see his logic. The town turned a blind eye to the sanitarium because they didn’t want to know what happened inside, but if contributing members of the town were to be found drained of blood, well that would be another matter.


It didn’t take me long to dig the grave, it was fresh. It was my own.  The coffin was no longer there, having been taken to the Manor for me to sleep in.  I wasn’t happy about laying Martha directly in the dirt, but I could see no other choice. Laying her straight, I placed her hands over her chest.


Her charred eyelids stared back at me, accusingly.  It was my fault she was here. Bending my head I said a prayer for her soul.  I prayed that she found peace and was once again in her husband’s arms. I prayed that God would welcome her to Heaven.  I prayed for Caroline to watch over her.  Then I prayed for forgiveness for the lives I had taken, Martha’s, for mercy and the three slaves because of anger.  I was horrified at how easily killing had come to me. Was I really nothing more than a monster, or could I still be redeemed?


I was filling in the grave when I noticed the scent. It was musky, an earthy animal smell, combined with dirt and sweat…and something else.  It wasn’t natural.  It was the lycan.  I turned and he was standing behind me.


“I really need to start paying more attention to what is going on around me,” I sighed. Standing, I prepared myself for the attack.


“What are you doing?” The voice came out as a growl, but easily understandable, though with an accent that reminded me of Raul. It came as a surprise to me that he could speak; I had assumed that in werewolf form, a lycan couldn’t talk.


“What do you mean?” I asked, maintaining my defensive stance.  My knees were bent, my feet placed apart for balance. I held my hands in front of me, ready to protect myself as well as I could from the assault I knew soon to be forthcoming.


“Are you doing some kind of a vampire ritual burial dance?”  The lycan cocked his head to the side, giving me a puzzled look.


“No, I am preparing to defend myself.”


“From…?” Then he started snuffling. It took me a moment to realize he was laughing.  This was too much.


“What are you laughing at,” I asked, offended. I couldn't believe this mutt was laughing at me.


“You,” he chuckled. “Do you really think that you could defend yourself from me like that?”


“You know, I am not in the mood to be mocked,” I said. “If you are going to kill me, then kill me.  I just ask that when I am dead, you dig this grave back up and place me inside.”


That brought more snuffing and snorting from the lycan.  “I am sorry,” he said, “but you are like no vampire I have ever met.  I have never had chance to find one burying another.”


“Have you met many vampires,” I asked, curious.


“Enough, although I admit, I usually rip them apart and eat them before introductions are out of the way. Knowing the name of your food serves no purpose. You are the first I have come across that seems even remotely interesting.”


“I am so glad you find me entertaining,” I said, relaxing my stance, but only slightly.  “And for the record, I am not burying a vampire.  Her name is Martha.  She was a friend.”


“That’s another thing; I never knew vampires could feel compassion for humans.”


“I imagine most don’t,” I said.  “Certainly the ones I have met do not. Well, except for Veronica, but even she doesn’t see them as I do.”


“As what I wish I still was.”  I looked at the lycan, and then at the grave I had just covered. “Well, if you are going to do it, you might as well do it now. Just make it quick.”  I closed my eyes and waited.


“Oh no, I already know too much about you.  Once you get to know someone, you can’t eat them.”


“No, I think you are far too interesting to kill.  Your friends up in that sanitarium though, I wouldn’t hesitate to eat.”


“They are not my friends.”


“Interesting.  I kind of got that idea last night, you didn’t seem keen on helping defend them. And your heart didn’t seem to be in the search for me afterwards, otherwise you would have noticed me when you passed me…at least one of the dozen times.  I guess I’m lucky the other three went searching in different directions.”


“I am finding that my olfactory sense is not as sharp as it should be,” I said ruefully. “That is something I paid dearly for.” Again, I looked at the grave.


“Who are you,” I asked.  “They are all worked up over your presence, even though there are other lycans in town. Even Veronica and there isn’t much that seems to faze her.”


“Oh yes, I’ve seen them.  I try to steer clear of their kind. They are a bit…off.  They breed amongst themselves you know. The one female is the mother of some of her ‘brothers’ and nephews.”


“I feel sorry for the women.  I am considering taking the one with me when I move on…if she will come willingly.  I’m not sure she will.”


“After I kill the vampire that murdered my wife.”


“No, that’s not his name.  Raul.  It was him that I was after the other night. The one whose head I ripped off got in the way, although the arm of the other made a tasty treat.”


I was disappointed to hear it was Raul that he was after and not Lucas.  Misinterpreting the look on my face, the lycan said, “I am sorry if he is a friend of yours, but if you had seen what he did to my Maria…”


He laughed at that. “Well, I could always make his death an added benefit, just for you my friend.  Oh, by the way, I don’t know your name. Mine is Tomas.”

Continued in A Shocking Revelation
Copyright© 2011 Lisa McCourt Hollar.  All rights reserved.
Posted by Lisa at 10:33 AM