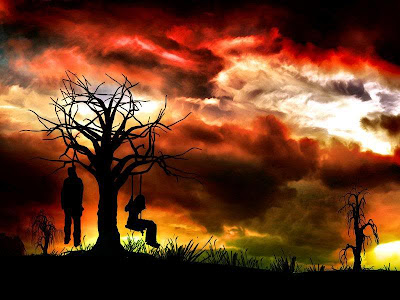 He hung himself on the tree where they had played as children.  It was near dusk when she found him, his feet dangling just above the ground, swaying back and forth over the grass, similar to when they had swung on the swing, their feet pumping back and forth, trying to see who could fly higher.  She always won, when they were children and now.


She didn’t know when his mind had become twisted, but she remembered the day she’d come home from work and found her son bloodied and bruised in the bathroom. He wouldn’t speak to her, just kept crying. When he had come to see Robby in the hospital, she had known immediately it had been him. She knew from the way Robby flinched at his touch and curled into a ball.  She knew from the way he looked guilty when Robby started crying; guilty because the same thing had happened to him when they were young.


He didn’t even try to deny it when she confronted him, just cried as they had when they were young, when he would leave his room.  She’d always crawled into his bed and held him until he stopped.
She held him that day, outside Robby’s hospital room. She stroked his hair, making shushing sounds and comforting him. When he stopped crying, she whispered to him that she understood.
“It’s not your fault,” she cooed, “He put this sickness in you. But now you’ve hurt Robby. You know what will happen to you in prison…what they did to him.”
He started shaking then.  “Please don’t tell.  I promise I won’t do it again.”
“That’s what he always said,” she whispered, “but he always came back, always hurt you. I won’t let you hurt Robby, not again.”
He cried some more and she held him, whispering to him what he needed to do to atone for his sins. Then she left him and went to her son.
She couldn’t find him later and she thought he had run.  Weeks went by. Robby would wake up nights screaming.  She would crawl into bed and comfort her son, as she had her brother. Then one night he’d been in the room.
“I just wanted to say I’m sorry,” he cried. She cried too, because when Robby had woke and screamed, he’d tried to silence him with a pillow.
“Go,” she choked, holding her son’s body. “Take care of it, or I will.
Later she’d gone to see if he’d done as she’d said.  Sitting on the swing that swayed next to his rope, she closed her eyes and pretended they were children again, swinging from their tree, before evil came into their lives and stole their innocence away.
Copyright© 2011 Lisa McCourt Hollar.  All rights reserved.
Posted by Lisa at 9:19 AM