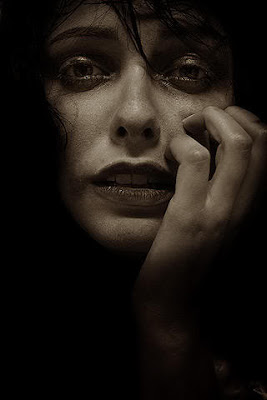 Jen stood on the edge of the platform, staring out into the horizon. It had been a difficult day. Her mother had been especially troublesome, refusing to stay put, and Jen had been forced to lock the doors, so she couldn’t go wandering outside. Jen knew it wasn’t her mother’s fault, but the disease that ravaged her mother’s mind that made her so difficult to handle. But why was she the one that had to take care of her every day. Her sister should come and help more than she did, instead of the couple hours on Tuesdays, she grudgingly gave. She wondered what Cindy would do if Jen wasn’t there to do all the hard stuff. Probably put their mother in a nursing home and forget about her. That’s what she’d planned on doing, before Jen had won the argument against a long term facility, by agreeing to move in with their mother and caring for her.

Jen hadn’t realized how difficult it would be, nor how lonely. As her mother’s condition got worse, family members that used to drop in to visit slowly dwindled away. It was too difficult for them to see the once strong woman, reduced to the shell she was. How did they think it was for Jen, having to see her day after day? On good days, she might remember your name, but the good days were few and far between. More often than not, she accused Jen of being a harlot, come to steal her husband from her; failing to remember that her husband had passed away six years earlier. And on days when she did remember that Jen was her daughter, she might verbally slash at her; telling Jen how she never should have had her, how she’d ruined her life, etc, etc. Jen tried not to take it personally, but it was difficult. She’d asked Cindy to start coming over more often, but Cindy had refused, saying she had too much to do, raising her own family. So there it went, falling back on Jen, who being single, should have nothing better to do than to throw her life away, caring for a woman who treated her like a criminal.
And she might not be single, if Cindy would give more of her time. Jen had been involved with someone when her mother first started showing signs of dementia. He’d stuck around for a while, but as her mother got worse, requiring more of her time, he had begun to pull himself out of the relationship. Jen had understood. It was kind of hard to feel romantic after spending the day changing the diapers of a woman who had once changed yours. And she knew it hadn’t been easy for Steve, spending his evenings listening to her mother accuse him of defiling her daughters honor. The fact that he stayed around as long as he did amazed Jen. Still, it got lonely, spending nights by herself, with just her mother’s ramblings to keep her company. Some nights she would wonder where she and Steve would be in their relationship, if she had never agreed to care for her mother.
Jen looked out, at the abyss before her. She thought about what her mother had told her today, right after she’d slapped her face. The words still stung, even more than her face had after the blow. “I wish you had died!” Her mother had said, referring to a childhood illness Jen had suffered at seven. Jen had almost died and still remembered her mother sitting by her bed, trying to hold back tears, as she put on a brave front for her daughter. She knew her mother didn’t really mean those words, it was the disease talking, but it still stung. Jen wondered, if even for only a brief moment, her mother had wished for her death. It would be so easy, Jen thought, taking a step forward, stopping short at the very edge. How far down was it? Jen looked longingly towards the ground, anticipating the jump, the feeling of falling through the air, free from her burdens.
Cindy would be expecting her back soon. She had to get back to her family. “Like mother and I aren’t family.” Jen thought. “It would serve her right if I don’t come back. Bet that would send her into a panic.”
“I wish you had died!” The words echoed inside of Jen’s head. “I wish you had died!” Over and over. “What if she was saying what she had only thought, all those years ago?”
Jen looked out, at the horizon, then down at the ground far below. “I wish you had died!”
Jen spread her arms and leaning forward, fell into nothingness. In her mind she heard her mother’s hateful words. She pictured her sister’s face, at the realization that Jen wouldn’t be there to depend on anymore.
Jen fell and heard her mother’s voice, the one from all those years ago. “Don’t die Jen. I’m not ready to lose you. Don’t die.”
Jen felt the air, ripping through her, as she fell towards the ground. She felt so free, released from the chains she’d felt, taking care of her mother.
“I wish you had died”, but not as strong in her mind anymore. More loudly, “Don’t die Jen. I love you. Don’t die.” Tears flowed from her eyes at the memory.
Jen fell, feeling freedom, the way a bird must, and remembered the care her mother had given her as a child; care that she now returned, as she cared for her mother. It was the cycle of life. How could she deny her mother after all she had done for her. After all, her mother hadn’t asked for this disease, any more than Jen had asked for the illness that had almost taken her at the age of seven.
“Don’t die Jen.”
Jen gauged the distance from the ground, then reached up and pulled the rip cord on her parachute. “Not today mom.” she said, “Not today.” Then, as she did every Tuesday when she went sky diving, she floated slowly back to Earth, having released her frustrations in the jump.
Oh, did you think she was going to kill herself? April Fools! Have a great day. 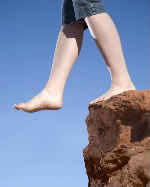