The Death Of Evil

I admit, I was at first angry that they buried Osama Bin Laden at sea. I, like many Americans, wanted the satisfaction of seeing his body paraded through the streets. I wanted to dance on his grave and rejoice in his death. This is the man that declared war on all Americans that day in September that we will never forget.


But we are not like him and we never should be. I believe our war is just, but I also believe we need to remember who we are and not change that. Perhaps it is more fitting that he was buried at sea, without even a grave for his followers to mourn at.


I have not included a picture of him here. I will not. Instead, you will find pictures of brave men and women that deserve to be honored for bringing him to justice. I don't know if the sailors in this picture were among the ones that had the honor of bringing death to an evil man, but they have served our country and to them and to all of our protectors I give a big thank you and God bless!
The Death Of Evil
By Lisa McCourt Hollar 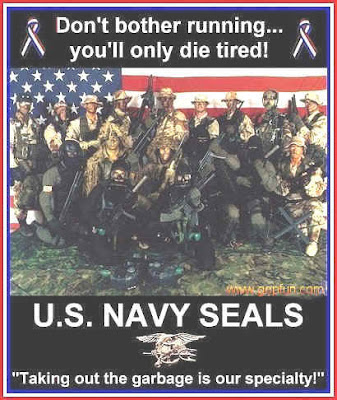 It has been a week since your death
And my joy has not faded.
You sought to destroy us,
But only made us stronger,
As we joined in common hatred
Of a man that Satan spawned.
You claimed holy right with your jihad
Against the American people,
But I can not help but wonder now,
Are you enjoying your virgins
In the pits of hell?
Others will rise up to take your place,
History proves, evil always finds a way,
Hitler, Stalin, so many can be named,
But you are the one that makes me smile,
When I think of how you died.
We must not forget though, those who gave their lives, those that were stolen from us that fateful day, and those that bravely stand between us and tyranny.  This battle isn't political, though some have tried to mak it so. It is about freedom and values and who we are as a people. Never forget that.
We Will Never Forget
By Lisa McCourt Hollar

We Will Never Forget

We have long memories. We will never forget
The lives that were stolen, nor the families destroyed.
We lost our innocence, our security proved false,
But we gained a resolve that will never be lost.

We will remember all those who sacrificed,
Risking their lives to free who they could
From towers that once stood proud,
Now burned from hatred, a graveyard inside.

We will remember a plane and those men that died,
Thwarting our enemies who's evil plan they denied.
We buried our dead. We mourned and we prayed,
Then we resolved Never Again!

Our anger was fierce, our wrath was let loose,
Against those who sought to destroy who we are.
They will never sleep another peaceful night.
We will be vigilant, they will never win.

The time has come to heal. We must
To remain true to who we were, to who we are.
And to who we will always be.
But we will remember, we will not forget!

Our brave men and women deserve our support,
As they protect our freedom with their own lives.
We will honor the memories of all who we lost.
We will be vigilant. We will be strong.


WE WILL REMEMBER.
Copyright© 2011 Lisa McCourt Hollar. All rights reserved
Posted by Lisa at 4:22 PM