No Respect For The Dead

No Respect For The Dead
By Lisa McCourt Hollar 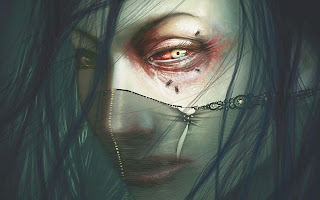 Hugh stepped outside his home and sniffed the air. The smell of rot and waste wafted in the air and he curled his nose, casting a sideways glance towards the new neighbor’s. He hesitated, wondering if he should try to speak to them again.  A bit reluctant though to experience that pain, he turned and headed the other way.


Hugh was hungry and his destination was Turner Street, where he was sure to find something quick to eat.  Hugh was really more of a homebody, preferring to dine alone behind the curtains and away from the world. Ever since Frank had moved in next door, his solitude had become a prison as the growing stink invaded his domain.  There was only so much air freshener could cover up and rot was not one of them.


“I’ll have to try speaking to him again,” Hugh thought, “when I get home. First though…” Hugh’s mouth was beginning to water as the smell of Indian cuisine reached him. He looked to be sure there was no traffic coming before stepping into the street and crossing.


The woman leaning against the post moved towards him, her dark eyes questioning. Hugh indicated he was interested in her fare and stood still as she told him the price. Hugh nodded his head, handing her a twenty, then following her into the alley.


“You’re a handsome man,” she said, leaning up against the wall of the tattoo parlor that had served as a backdrop to their exchange. It pleased her to have a man as handsome as this one approach her. He was much better than the junkies that usually found their way to Turner Street..


Hugh reached out his hand and stroked her cheek, running his fingers over her silky skin. The oil she used after she bathed smelled of brown sugar.


“I have a mattress over there if you like,” she said, indicating a filthy lump that lay behind the dumpster. Hugh shook his head, wrinkling his nose. The smell reminded him too much of Frank’s house. He pushed against her, burying his nose into her neck to block out the stink.  Her skin smelled much better, more enticing. His lips moved over her neck, his tongue flicking out and tasting the oil. It was slightly bitter. The woman sighed, leaning into him. She reached down to unbuckle his pants and was surprised to discover he wasn’t showing signs of arousal.


“Do you not want me,” she asked confused.


“I do,” Hugh said, “but not in the way you think.” He then bit into her flesh, piercing the skin with his fangs, his eyes glazing over as the taste of her blood assaulted his tongue. He bit deeper, coating his mouth before swallowing. The woman pushed against him, trying to fight him off, but to no avail.  Hugh continued to drink, sating his appetite before lowering her to the ground. She was still breathing, though unconscious from the loss of blood.  He had drunk more than he intended, more than twenty dollars’ worth. Pulling a few more bills from his wallet, Hugh placed them between her breasts, making sure they were sufficiently secure before using his cell to call 911.


Still hungry, Hugh made another stop in China town and another a few blocks from home. He left the third woman, a college student sleeping in the bushes. She wouldn’t remember a thing in the morning, although she would be a little weak.


As Hugh neared his neighborhood, the stench from Frank’s home assaulted him again.  Knocking on the door, he heard Frank’s heavy feet clomping across the floor. He was surprised he hadn’t gone through the floorboards.


“The same as it was yesterday and the day before. It stinks!”


“Then don’t breathe,” Frank said. “You are technically dead, it’s not as though you need to.”

“That is your choice,” Frank mused, “but I don’t know what you want me to do.”
“This used to be such a nice neighborhood,” Hugh said.


“It still is, or at least could be if you would quit bothering me. I was told by the realtor that you were a quiet guy. I guess she lied.”


Hugh laughed, “She’s a wraith, you can’t believe anything she tells you.”


“Frank, is everything ok?” Frank’s wife and the source of the odor moved into view.  Hugh gagged, trying to keep the blood down. Miranda had been dead for nearly a month now and her body wasn’t holding up as well as some of the other zombies Hugh had known. Of course they weren’t meant to live in this warm climate.


“Everything is fine,” Frank said, “Hugh just stopped by to chat with me about my latest experiment.”


“Oh, ok,” his wife said, turning to stagger towards the living room.


“When are you going to give up,” Hugh asked. “She is the fourth one this year and they aren’t lasting any longer than the first. I know you miss your wife, but you can’t keep digging up bodies and transferring her mind into them.”


Frank looked at Hugh a few moments. He knew he was right, but he wasn’t about to give up. “Why don’t you go and bother Joe Mummy down the road,” Frank said, “and leave me alone.” He then shut the door, leaving Hugh standing there staring at the sign that said The Stein Family on it.


Sighing, Hugh looked towards the rising sun and hurried home to his coffin. As he shut the lid, he shook his head, thinking how this used to be such a nice neighborhood before they started letting man made monsters move in. They had no respect for the dead.
Word Count: 1,000
Copyright© 2011 Lisa McCourt Hollar.  All rights reserved.
Posted by Lisa at 1:09 AM