Flash story I wrote a few weeks ago for the Saturday Shorts contest. I didn't win that week, another story beat me out, but this is what I did with the prompt. You had to use the words cheddar, gargoyle, doorknob and velveteen and write as a post Apocalyptic survivor. By the way, I won this past Saturday so why not stop by and read my fairy tale with a twist, Happily Ever After?
Fallout
by Lisa McCourt Hollar 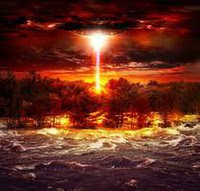 It smelled like cheddar in the room. That’s all I remember about my first few days after the world fell apart.  That and the screaming.  I was only seven at the time and my mother had locked me in the cellar the minute the alarms went off.  They were loud, screaming at me for hours, as I huddled In the small room with nothing to keep me company, save my Velveteen Rabbit that daddy had given me for my birthday, along with a book about my new friend.
Daddy had left the next day and hadn’t been home since.  Mother said he was helping defend us from the enemy. I didn’t know who the enemy was, but they were evil.  I had nightmares for weeks after daddy left, images of him being cooked in fire filling my head.
The sirens stopped as quickly as they began. I remained in the cellar for days, maybe weeks, waiting for mother to return with Teri.  She never did. She had stocked the room with food and water, so we could survive down there for a year if need be
I slept a lot in the corner of the room that was becoming my crypt. There were 3 cots but I only needed one.  I pretended sometimes that mother was in one and just being quiet. The lights had failed, so I could pretend; until I turned on the flashlight and saw the cots still empty.
I heard scratching at the door. I’m not sure how much time had passed. The bucket in the corner was filled with my waste…the room no longer smelled like cheddar. I wished it did. The scratching was fervent and I heard a whine, followed by a low growl. Then quiet. Sometime later the scratching came again. I tried not to cry. I didn’t want whatever it was out there to hear.
One day I thought I heard voices calling for me.  “AMY!”  At first it was faint, then it got louder.  I knew that voice.  It was daddy’s.  Running to the top of the steps, I grabbed the doorknob and turned it. The door didn’t open. I yelled, “I’m here!”  I heard things being tossed to the side, then the lock on the door clicked. It swung open and light hit my eyes for the first time in what seemed forever. I squinted into the glare of the sun, what was it doing in my living room?
Then I saw daddy, still in his uniform. Our living room was gone. The gargoyle that mother had bought at an auction lay on its side, mother and Teri beneath it.  Their bodies were half gone, eaten by whatever had been scratching outside the door.
Daddy said the war was over and we had won, not that it mattered. Most everyone was dead from the radiation.  We weren’t even sure if we would survive the fallout. But we had each other and at that moment, that was all that mattered.
Word Count: 499
Copyright© 2011 Lisa McCourt Hollar
Posted by Lisa at 11:56 AM