The Circle Of Life

The Circle Of Life
By Lisa McCourt Hollar 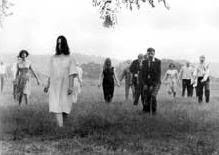 The fly buzzed around the body, depositing its eggs. The rotting flesh of the cadaver was the perfect place to feed and the fly’s offspring would do well with this feast.  Soon the body, decomposed, became the home of maggots and other living creepy crawlies that made the corpse their home.

The smell attracted animals that ate the meat. Carrion birds landed, plucking up bits of flesh. A raven plucked out the grand prize, an eye that was filmy, no longer the bright blue it used to be.

The sun too ravaged the body, heating it and baking the organs beneath its hot rays. Hank, or at least what was left of Hank, didn’t mind too much. He was dead after all; why not nourish what was left on this planet?

But if he was dead, why did he feel pain when the wolf bit into his stomach, disemboweling him and taking off with his large intestines, whilst his mate snatched the small ones? If he was dead, why was he even aware of this at all?

Suddenly his legs jerked and Hank sat up, scaring off a few of the birds and a fox. One bird, the one with his eye, was busy eating his meal and didn’t notice the corpse buffet sit up. Why would he have even thought to look? Dead is dead and they don’t move. He’s had plenty of meals to know that when the meat starts to rot, it’s not going to complain. So it came as quite a shock to him when his food grabbed him from behind and bit his head off.

Hank straightened his neck, chewing the tasty bird and looking around.  In the distance he saw the smoldering city that had once been his home. Around him, others that had been dead sat up.  Hank recognized his little girl, her skin hanging from her face in strips, the meat and muscle exposed. She was holding a rabbit, the creatures blood dripping from her lips. Her name, Lily, came to his mind and he remembered her chasing butterflies in the field. That was before the earth started shaking. Bombs from aircraft were being pummeled at their city. There had been no notice, no warning from their government, just bombs, screaming and then death.

‘But I’m not dead’, Hank thought, absentmindedly chewing the rest of the raven. ‘None of us are.’ All around him the members of his church were rising, some feasting on the animals that had been too slow to move. One, a young mother, looked at her baby who had only been born a few months before. The infant too was alive, though her arms and legs were gone, torn off and consumed by scavengers. The young mother assessed her baby’s condition, shrugged and took a bite out of what was left of the child’s neck.  Hank watched, his mouth watering. He wondered if the baby tasted good.

‘What manner of hell is this,’ Hank wondered, rational thought returning, if only for a moment. ‘What happened to the rapture? Weren’t we promised not to be left behind? Why were we returned from the dead?’

Hank’s mind clouded again and a sweet scent drifted to him. It stirred a desire deep in his belly. Looking around he saw the others smelled it too. His daughter dropped the rabbit. The creatures bones were all that was left. She smiled, revealing organs and meat sticking between blood coated teeth. Hank tried to say something. Nothing came out except a series of grunts and moans. He had forgotten how to speak!

The smell came again. It was so sweet and his stomach growled, commanding that he find the source of the tantalizing scent. He moved towards the city, his steps slow and painful. The need to find the smell though was more important than his comfort. He needed to eat and there was something in the city he wanted more than anything. Behind him the other members of his congregation followed, as always, allowing their pastor to take the lead in all things.

Inside the city more doors opened, survivors of the attack crawling from bomb shelters and storm cellars.  On their minds, food, water and shelter, some even worried about the effects of radiation. They weren’t worried about the dead, except for whether or not their loved ones were among the casualty. It never crossed their mind that when the CDC put out an advisory on how to prepare for a Zombie Apocalypse that there was ever anything more to it other than someone having a sense of humor. They certainly never dreamed that before long they would have more to worry about than food, water and shelter and that foremost on their mind would be how to avoid being eaten by the dead.

This story is included in my collection, Bugs! And Other Creepy Crawlers. 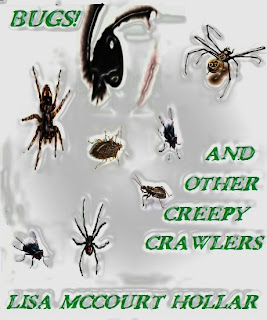