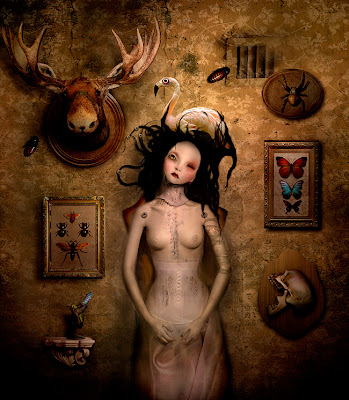 The sound of children laughing carried down Haller Street as ghosts and witches rang doorbells, screaming out “Trick Or Treat” whilst holding out heavy laden bags to be filled with candy and other goodies, all of which would be inspected by their parents when they went home for the evening.

“My, you look scary,” would often be heard in the voices of young mother’s and old grandmother’s as they passed out the candy. Every single porch light was on this evening, inviting the frightening children to come do their worst, all except one. The Harper house remained ominously dark as it did every year.

Inside Tom Harper watched the small figures as they passed his house.  A few of them stopped and stared, whispering among themselves. He knew what they said about him, the same things their parents had said about him when they were children. They called him a freak and a retard. As a child this had hurt him deeply. While it was true he didn’t look like other children, his nose and eyes being in the wrong places and one of his ears missing completely, Tom didn’t feel he deserved that kind of treatment. He was extremely intelligent and since the other children in the neighborhood wouldn’t play with him, he spent his time reading books, increasing his knowledge and understanding of the world and how things worked.

At 29, he still lived at home with his mother and watching the children running up and down the street opened old wounds. Even though he couldn’t hear them he could well imagine what they were saying. Dropping the curtain he went back into his work room where he was preparing a small bird for a customer. Around him animals of all shape, size and species watched, forever frozen in the pose he had placed them. They were his friends, never judging him for the way he looked. He had just got the bird to set on the branch, it’s wings spread as though ready to take flight, when a loud crash caused him to knock the bird to the ground. Turning he saw the window behind him was broke, the glass shattered all over the floor.

“Tom,” his mother called from the living room, “is everything alright.”

Looking out the window Tom caught a glimpse of Bobby Baker running into his house down the road. Tom picked the bird off the ground, finishing the job. When done he looked at the creature and smiled. The bird was a glorious creature and this was reflected in the pose. He was pleased to have honored his death in this way.

Tom glanced at the glass still littering the floor. Sighing, he cleaned it up and put a board in the window. Finishing the task he grabbed his jacket and yelled at his mother that he was going out for a while.

Bobby Baker ate 2 candy bars, a bag of M&M’s and a handful of jellybeans before his mother made him brush his teeth and go to bed.

“You’re going to have bad dreams eating all that candy,” his mother scolded.

“Maybe I’ll see Freddy Krueger,” Bobby scoffed, “then I can introduce him to my nightmares.”

Mrs. Baker laughed. She loved Bobby’s imagination. Some of his teacher’s had expressed concern, one going so far as to accuse Bobby of being a bully, but Mrs. Baker didn’t believe a word of it. Bobby was a little angel. If they wanted to accuse someone of being a monster they should take a look at Tom Harper. What kind of a person becomes a taxidermist? It gave her the creeps just thinking about it.

Bobby dreamed he was being carried out of his room by Freddy Krueger. He struggled to free himself, but he couldn’t get away, Freddy just dug his knife like fingers in even deeper. Then Freddy started laughing and his voice sounded like the taxidermist that lived across the street. All around him animals stared back at him accusingly. He recognized Sally’s cat, Fluffy. He’d shot it with his b b gun. He hadn’t expected the creature to die, but it was cool when it did.

There was that dog whose throat he’d slit and then hung up in the garage to watch as the blood flowed out. He’s wondered what happened to it. He’d planned on checking out its insides later but it had disappeared. He’d had a hard time cleaning up the blood before his mom came home from work.

Oh wow, was that Suzie Carmichael. She’d disappeared a few months ago. No one had ever known what happened to her. She looked funny though, her eyes were glassy and she was standing so still.

Slowly Bobby became aware he wasn’t asleep. As he did, he looked around the room and realized he wasn’t in his bed anymore. Animals of all shapes and sizes looked back at him. Many of them were creatures he had killed. Except for Suzie Carmichael, he hadn’t killed her. He’d had a bit of a crush on her, ever since she’d seen him skin that rabbit alive and didn’t get freaked out about it. She’d even shown him an easier way to do it.  Suzie Carmichael was wonderful and if she ever were in his dreams, she wouldn’t be dead.

“That wasn’t very nice of you, breaking my window like that,” Tom said.

“Don’t lie to my son,” a voice said. It sounded like Mrs. Harper and Bobby turned his head, seeing the old woman sitting behind Suzie, only she was dead too, posed in her sitting chair.

“I think I know just how I’m going to position you,” Tom said. Horrified, Bobby screamed as the sound of an electric tool started up.