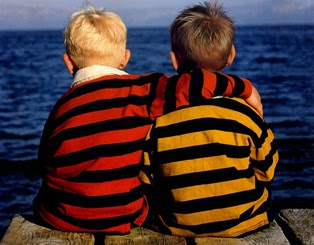 “Hello old friend.”
Jerry jumped, hearing a voice he hadn’t heard in a long time. Turning he stared dumbly at Gary Johnson, his best friend from way back when…back before his mother had decided they shouldn’t be friends anymore. Jerry’s mother had agreed, claiming Gary was a bad influence on him, ironic since that is what Gary’s mother had claimed of Jerry. The two women of course had never met, living in different worlds and refusing to acknowledge that either existed.
“What are you doing here,” Jerry asked, looking around. He was worried his wife would hear them talking and come look and see who was visiting. He didn’t know if he could handle it if she scoffed at his old friendship.  Some of his best memories were of his adventures with Gary, as he was sure it was the same for Gary’s memories…why else would he be here now?
“I’ve been having a bad time lately,” Gary said. “I lost my job, my wife has been turning a cold shoulder lately and my kids barely acknowledge that I exist. It’s not going to be long before I lose my home and I know my family won’t be far behind.”
“I know what you mean pal,” Jerry said, sitting down next to his friend. “My daughter got her tongue pierced.  Why would anyone do that to themselves? You ever bite your tongue? Insane, that’s what it is.”
“There’re days I long for the good ol’ times,” Gary sighed.  “Remember when we played that prank on Tommy Anders?”
The two friends chuckled, remembering their old nemesis and the look on his face when he woke up  in the middle of the lake.  They’d been at camp and moving him hadn’t been hard. Of course they’d had no idea Tommy couldn’t swim. His mother took him home that day and Gary’s mother forbade him to ever play with Jerry again. That didn’t stop them though. They were best friends and you couldn’t just stop being best friends. They just had to be careful and not drown anyone else.
It really wasn’t as easy as it sounds. The two friends had vivid imaginations and could dream up a lot of games to play. Jerry had a neighbor that was constantly teasing him, calling him names and tripping him on the way to school. So one day Gary walked to school with Jerry. The first time Dave tried to trip him, Gary, who was always so much bigger than his friend, jumped out of the bushes he’d been lurking in and beat Dave. They hadn’t meant to put the boy in a coma, just teach him a lesson. Jerry’s mother didn’t see it that way though. She blamed Gary and forbade Jerry to ever play with him again.
The two friends tried to keep their friendship up, but their parents just didn’t understand. It got harder and harder to see each other until one day they just stopped trying.
“I’ve missed you,” Jerry said, admitting for the first time in years what he’d been afraid to tell anyone, even his wife.
“Same,” Gary said.
The two sat for a few moments, silent while they tried to decide if they should pick up their friendship. They’d changed a lot over the years and their worlds were so much more different. Besides, neither was sure they could go back. A lot had happened. You drown a kid at camp and beat another boy into a coma and they think something is wrong with you. They lock you up and call you crazy and tell you your friend never existed. And even when you know he did, you start to believe it might be true and you are crazy.
“Jerry, who are you talking to?” Jerry’s wife looked at him, concern in her eyes. She didn’t see Gary sitting next to him.  Jerry just smile and answered that he was thinking out loud.
“Okay,” she said, smiling. She knew people said things about her husband, called him odd, but she loved him. She worried though. She was sure she’d heard him talking to someone he called Gary. She knew about Gary. She knew he wasn’t real, just an imaginary friend he’d dreamed up as a child. Then something went wrong and he began acting out and blaming Gary for it all. The doctor called it Multiple Personality Disorder, but Angie called it the effects of a domineering mother. That was why she finally had to kill the old bitch. “Jerry, don’t talk to Angie, she’s a bad influence.  Jerry, you are a bad boy. Jerry, what did you do now?”  So Angie had killed her to free Jerry.  Of course, no one had believed that she’d done it, trying to blame it on Jerry, but she did her best to make him happy. She had after all married him, given him children and sang to him whenever he got lonely. They gave him medicine to try and suppress her influence, but she was still there with him. Shady Acres Institute for the Criminally Insane wasn’t necessarily the best place to raise a family, but it was where Jerry was and so it was where she would remain.
Sitting next to her husband, Angie kissed him on the forehead and wrapped her arms around him. She wished they would take his jacket off so he could hug her back.  Somewhere in another section of the universe, Gary Johnson sat in his own little mental abyss, rocking back and forth while his doctors shook their heads as he mumbled  to himself.
Copyright© 2011 Lisa McCourt Hollar.  All rights reserved.
Posted by Lisa at 2:31 PM