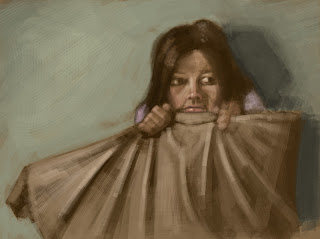 She tried to tell her mommy about the voices, but Francine’s mommy had just shook her head and told her to quit making things up.
“Francine, I know you want things to go back to the way they were, but they won’t,” her mommy said. “Your daddy burnt that bridge when he decided to shag his secretary. Now go finish unpacking your boxes and get your room in order.”
Francine had cried then. Her mommy had been so cross ever since daddy shagged his sec a tary. She didn’t know what shag meant, but she knew it must be pretty bad. She’d heard her mommy’s friend say someone should cut his balls off. She didn’t know what that meant either, but it must be pretty bad.
Back in her room, Francine heard the whispering voices again. They sounded like they were coming from behind the wall. Francine tried to ignore them, but one of the voices was crying and it sounded sad. Finally Francine tiptoed over to the wall and put her ear against the paneling. She could hear the crying louder now.
“Are you okay,” Francine whispered. The crying stopped. She pressed her ear harder against the wall and listened some more. She couldn’t hear the whispering anymore either. “Are you still there,” she asked. No one answered.
Francine went back to unpacking her boxes. She put her books on the bookshelf in the corner. Frowning, she picked up a book that was nearly hidden in the corner of the bottom shelf. It was dusty, with a dark green cover. The words ABIGAIL’S DIARY were written on the front. She flipped it open. There were pictures inside, stick figures of a little girl. She looked happy on the first few pages, but then the pictures started to look scary. There were pictures of the girl listening at the wall. She wrote I HEAR VOICES under the picture. There were pictures of the little girl crying in her bed. The words said, I’m Afraid! The last page that was written on showed a scary man with a big frown standing over the girl, his stick hands raised like he was hitting the girl. Under the picture were the words, HE HURTS ME. Turning back to the front page, Francine looked at the girls name there, Abigail Rose.
***
They were eating dinner that night. Stacey was eating with them. She’d been coming over for dinner a lot ever since daddy shagged the sec a tary. She said it was for moral support. She and her mommy would drink and talk about how worth ess men were. It made Francine sad, because she knew they were talking about her daddy and she didn’t think he was worth ess, even if he did shag his sec a tary. So she was tuning the two of them out when she heard a name she recognized.
“Abigail Rose,” her mother was saying. Francine’s ears perked up.
“They never found her,” Stacey asked.
“Never,” her mother answered. “She just disappeared from her bed one night. They arrested her father, accused him of killing her, but they never found her body.”
“Why did they think it was her father,” Stacey asked.
“She’d drawn pictures of a man doing things to her in her bedroom. Who else could it have been?”
“She’s not dead,” Francine said, speaking for the first time since dinner had begun. The two woman looked at her, almost surprised to see she was there.
“What are you talking about,” her mother asked.
“Abigail Rose, she’s not dead. She’s behind the wall. I think she’s scared cuz she cries a lot.”
“Francine, I told you not to be making up stories,” her mother grouched at her.
“I’m not making up stories,” Francine said, crossing her arms. She was tired of being accused of lying. Lying was bad . “Abigail is behind the wall and so is the man that hurt her! That’s why she’s crying!”
“Go to your room,” her mother said. Francine pushed herself away from the table and gave her mother a final defiant look before she left the room. Just before she was out of earshot she heard her mother say, “I don’t know what’s gotten into her lately.”
***
Francine was sleeping when she heard the voices whispering.
“Stop it,” the man hissed.
“You’re hurting me,” Abigail cried, “Stop it!”
“Leave her alone,” Francine said, putting her ear to the wall.
“Go away,” the man hissed. “You don’t belong here!” Francine jumped backwards, startled to see an imprint of a man’s face appear in the wall.
***
Abigail was hiding in her closet. Her daddy and mommy were downstairs yelling at each other. She wished they would stop.
“You can’t keep me from seeing Francine! She’s my daughter too!”
“You should have thought about that before you fucked your secretary!”
“Do you really want to turn this into a fight,” her father asked, sounding sad. “Think about what is best for the girl.”
“Was that what you were thinking when you stuck it to Jennifer?”
Francine covered her ears and pressed up against the back of the closet. She felt something give and fell backwards into the wall. Standing she turned, trying to find her was back into the closet, but the opening had closed again. When she turned around, the scary man was standing there. He looked angry.
***
“Where is she,” Jim asked, turning towards his ex-wife.
“She was here just a minute ago,” Joan said, looking confused. Turning she called for her daughter, “Francine!”
“I’m here mommy,” Francine called, trying to make herself heard through the wall, but they couldn’t hear her, no matter how loud she screamed.