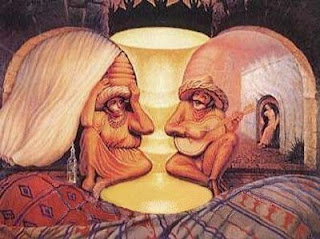 The door opened inward. Murdock eased it open silently and looked inside. The woman was sitting on the couch reading a book and oblivious to the danger she was in. Somewhere on the other side of the living room a man was talking, but Murdock couldn't see him from his vantage point. The television, maybe?
Stepping into the kitchen, Murdock smiled at how easy it had been to gain access. As with his previous visit, while the old couple had been away, the door was unlocked. Stepping forward, he chuckled. This was going to be fun. Halfway through the room, he froze. He had forgotten about the loose floorboard that creaked loudly when stepped on. He glanced into the living room at the woman, wondering if she had noticed. She didn't even look up from her book, one of those steamy romances that had a picture of a half naked man on the cover. Breathing a sigh of relief, Murdock eased his foot off the board and towards the living room. Reaching into his coat pocket he pulled out a knife and chuckled silently.
"Did you hear me Ethel?"
"Hmmm?" Ethel didn't even glance up from her book.
"I said, it sure is quiet out tonight."
Ethel did look up now. Sighing, so her husband would know how annoyed she was at his interruption she said, "And I was enjoying the silence, until you interrupted it. Why don't you watch the tube?"
"Nothing good on," Bob said.
"Nothing good on," Ethel said, her voice mocking that of her husband's. "Are you going to tell me that with over 300 channels, you can't find anything to watch?"
"Nothing good." Bob looked out the window, wishing that young thing across the way was home. She was always good for a little entertainment. The last time she had flashed him a look at her titties before closing the curtain. He knew she'd done it on purpose too, winking at him before taking the eye candy away.
"Are you trying to get a peek at that girl again? You old fool, she's going to call the police one of these days, then everyone will know what an old pervert you are."
"I'm a pervert? And just what is that smut you are reading, Miss High and Mighty?"
"Not smut," Ethel said, her voice stiff and frosty, "Literature."
Murdock groaned, listening to the couple bicker. This was why he never married. Love always turned to hate. He'd seen it with his own parents. The two of them had fought so much when he was a boy, that when his father had stabbed his mother, he'd been relieved that the fighting was over. Tonight would be more than fun. He'd be doing the couple a favor, removing them from their misery.
He was almost to the living room now. The old woman had her back turned to him as she picked at her husband, her words cutting through the air like a knife. Murdock gripped his own knife and smiled, imagining cutting out her tongue. A breeze blew across his back and he realized he hadn't shut the door behind him. Ethel felt the breeze too and turned towards the kitchen, her eyes opening wide. Knocking her book to the floor, she opened her mouth to speak while struggling to get up from the couch. Murdock felt his heart racing. The game was about to begin.
"Ethel, what's the matter?" Bob couldn't see what his wife was looking at, but something in the kitchen had caught her attention. A breeze blew into the living room and Bob pulled his sweater closed in front.
Murdock stepped into the living room, just as the old biddy stood. He saw her eyes wince in pain and wondered if her knees were giving her problems. Well, not for long if they were. Raising his knife in the air, he ran at her, bringing the blade down towards her heart.
"Ethel, what is it," Bob repeated.
"The backdoor," Edith said, shivering. Her mother used to tell her a chill like that meant someone had walked across your grave. "It blew open again. When are you going to fix it?"
"I told you, I've looked at it and there's nothing wrong with the door."
"If there's nothing wrong with the door," Ethel griped, "then why does it keep blowing open?" Angrily, she stalked across the floor, passing Murdock, who was looking at his knife, confused. Slamming the door shut, Ethel returned to the couch, passing straight through Murdock, who had stepped in front of her. He slashed his knife down again and watched unbelieving as it passed straight through the woman. Bending, Edith picked up her book from the floor, wincing at the pain in her knees. She'd lost her damn place.
"I don't know," Bob said, "but there's nothing wrong with the door."
"I suppose we have ghosts then," Edith snorted.
"Unless you have a better suggestion," Bob said, smiling inwardly when he saw Ethel's eye begin to twitch.
"You old coot," Ethel said, then having found her place in the book, she returned to her fantasy. One that didn't include feeble minded husband's.
Sighing, Murdock sat on the other end of the couch. How many nights had he relived this nightmare? Bob turned on the television. Jay Leno was on, saying something about sex and politics. Bob turned the volume up and Ethel snapped at him to turn it down. "What did you say? I can't hear you." Then Bob turned it up louder.
Murdock shoved his knife back into his pocket, resigned to a night of bickering. He would have paid more attention to the preacher his mother had dragged him to, if he'd known that hell for him would be an eternity with Bob and Ethel.
copyright 2011 Lisa McCourt Hollar.  All rights reserved.
Posted by Lisa at 11:50 AM