If you haven't read the previous post, please do. It is the story of what happened to Death prior to this. I have written this story for the vamplit friday flash blog. The theme is Death.
Death Goes On Strike
By Lisa McCourt Hollar
“Death, what are you doing?”

Death looked up at the figure standing over him, a smile playing around his thin, boney lips. “Uh, fishing. At least that’s what it used to be called when you put a worm on a hook and threw it into the water. Since I haven’t had any fish bite lately, I think it might actually be called loitering. But I like the term fishing, so I’m just going to go with it.”

Khronos sighed, “I mean why are you fishing instead of doing your job?”

“You’re Death. You can’t go on strike. You know what happens when you don’t do your job.”

“That about covers it. And I’m not happy when zombies come busting down my door and try to eat my brains.”

“Hmmm,” Death said, reeling in the fishing line, inspecting his bait and then casting it back out, “not my problem.”

“IT MOST CERTAINLY IS!” Khronos paused, trying to calm himself. It wasn’t becoming of a god to lose control. After a moment, he continued on, calmer. “It most certainly is your problem. I have zombies knocking down my door because you aren’t doing your job. Now you’re on probation. I would think you would find it in your best interest to tow the line.”

“You know where I live,” Death said, “You’ve been there. You have met HER. I can’t take it anymore.”

“I can’t. Not on what you and the Death Council pay me. So until I get a raise, I will not be collecting any more souls.”

“You can be replaced,” Khronos said.

“Oh no, not that! Anything but that!” Death fell on the ground, cowering at the feet of the god of time. Then he started laughing. “Please, do. I would like to see who you find to do this job?”

“Giltinė has expressed interest in having her job back.”

“Giltinė. You have got to be kidding me. She was old when I took over. She must be farting dust by now.”

“She has a certain style though. That poison tongue of hers was always a big hit with the council. And we never had zombies running around when she was collecting for us.”

“No? How about those seven years she was trapped in a coffin? Did people just show up at Purgatory and turn in their souls? Oh wait…you called it leprosy back then.”

“Zombies and lepers are not the same.”

“No, but no one wants to touch either one.”

“Get back to work,” Khronos pleaded.

“You know the money isn’t there Grim. We have Xeracles working in pest control. Budget cuts have forced even the highest paid demi gods to take cuts in pay.”

“I’m not asking for much. Just enough to move out of my mom’s place. Do you know she has started dating? I don’t think I can stand much more of the sounds coming from her room.”

“She’s dating. Since when?”

“Hey wait,” Death said, detecting a bit of jealousy in his boss’s voice. “You don’t have a thing for my mother do you? You know she turns men into stone, right?”

“Of course not. Umm, how long has she been dating?”

“Who is she seeing?” Khronos winced at the mild squeak in his voice.

“Poseidon this week. Who knows who she might be interested in next week. Could be you…if you play your cards right.”

“What do you mean if I play my cards right?”

“I know there has to be some extra money lying around someplace. You give me a raise, I go back to work and you take my mother out to eat at that new cannibal restaurant. It’s a win win for everyone.”

“Well, Xeracles has been getting lax on the pest control. There are rodents running around unchecked on Mount Olympus. I might be able to justify another cut in pay.”

“I want better health coverage too.”

“How about if we reduce your out of pocket?”

“We’re getting there. Give me a drug card and we might be able to end this strike.”

“Done,” Khronos said, producing a contract for Death to sign.

“Death,” Khronos asked, feeling slightly as though he had just sold his soul to the Reaper,  “did I just pay to date your mother?”

“You don’t find anything wrong with this?”

“Start with my office when clearing out the zombies.”


“It’s all over the news, you went back to work,” Medusa said, patting her son’s shoulders.

“Really,” Grim said, “what are they saying?”

“That you struck some kind of deal with the Death Council and that all the zombies have been taken care of. Xeracles is a little miffed though.”

“I imagine, having to take a cut in pay.”

“They fired him,” Medusa said, surprised her son didn’t know. They said that they couldn’t afford to pay for death and pest control both so they are combining the jobs.”

“What do you mean, combining,” Grim asked.

“Soul collecting and rodent patrol are done by one entity now.”

Death cringed as his mother began to rant about his inability to do anything right. Okay, so he would have to take care of rats too. And cochroaches. Death shuddered at that. Cochroaches were even harder to kill than zombies. Speaking of things that were hard to kill…

“I swear, I don’t know what you would do without me,” Medusa ranted.

“I can think of a few things.” Death looked at the clock and smiled. “By the way, you have a date tonight. Wear something hideous.” 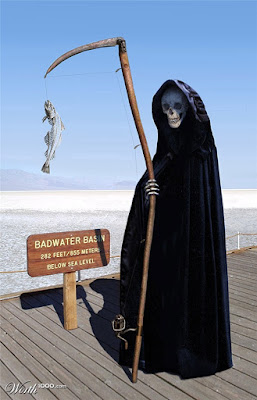