The Truth About Vampires

This weeks vamplit friday flash prompt is the corpse.
The Truth About Vampires
by Lisa McCourt Hollar 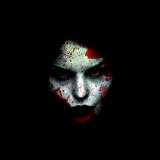 "What kind of animal could have done this?" Charlie Branson surveyed the field that contained the corpses of three of his cows. They had been locked in the barn when he went in for the night. This morning he woke to find the door ripped off the barn and what was left of his herd, cowering in the back.
Sheriff Griswold shrugged his shoulders. "I s'pose mountain lion, maybe a coyote." He didn't sound very convincing.
Ty Branson snorted. "A mountain lion decapitated three cows? Really? I mean, maybe one...if it were really hungry, but three? And tore the door off the barn to get to them? That I would like to see."
"It was a vampire."
Charlie Branson shook his head. Of course Irene thought it was a vampire. Everything she read was about vampires.
"Look here girlie," the sheriff said, "I can't speak for New York, but here in Montana, we don't have vampires."
"Yeah, shocks the shit out of me too. If I'd known vampires liked the country, I would have begged dad to move us here sooner."
Ty laughed at his sister's sarcasm but Charlie wasn't impressed. "Irene, that's enough. I have all I can deal with, without you adding to it."
Irene smirked, her eyes taking in the bodies of the cows and their severed heads. Their stomachs had even been gutted, splayed open to reveal that their insides were missing. Yet the field was remarkably clean of blood. A little here and there, nothing more than splatter. No blood pooling on the ground. She’d watched enough CSI to know that was unusual. She’d also read enough vampire books to know what did cause a lack of blood in deaths like these. She shook her head. How could they not think vampire?
"Can we move back to New York now," she asked.
"Go back to the house," Charlie said, his voice beginning to crack.
***
"Have you seen Ty?"
Irene looked away from the t.v. and shrugged her shoulders at her dad. "He thought he heard a noise outside, so he went to check on the cows. That was a while ago though."
"And you didn't think to go look in on him?"
"Why? Are the cows going to mug him?"
"You really are too much," Charlie said. Shaking his head he went to look for Ty. Irene didn't think anymore about it until she heard her dad yelling. Jumping up from the couch, she opened the door. Her dad was carrying something but she couldn't tell what. Then she saw that it was Charlie...or at least part of him. His head was missing.
***
Irene closed the last box. Sighing, she looked in the mirror. Her eyes were red from all the crying. It was only three days ago that they had buried Ty. It was closed casket but she had taken a look inside when no one was paying attention. The coroner had done a good job sewing his head back on. It didn't make him presentable enough for viewing but at least he didn't have to spend eternity headless.
"Well Ty," she said, hoping that his spirit was listening, "we get to go back to New York. Well I do anyway. I guess you get to stay here." She started crying again. "This isn't what I wanted."
A crash in the hallway startled Irene from her thoughts. She looked at the clock. It was just after midnight. She didn't think her parents were still awake, but maybe they were having trouble sleeping too. Then she heard her mother scream and then silence.
"Mom, are you okay?" Irene cautiously crossed her room. They never had found what killed Ty and just this morning Frank Lawson had found all of his hogs gutted. People were beginning to get nervous. Most of the town still thought it was an animal, but there were some who were beginning to question the lack of blood."
"Mom?" No one answered. Irene opened the door just enough to look through. A familiar figure was in the hall, his back to her. He was bending over something, grunting loudly while making slurping noises. Irene sucked in her breath, gasping loudly before she could stop herself. Ty turned to look at her.
Irene tried to scream, but nothing came out. The corpse that was her brother stood, it's mouth covered in blood. The thick liquid dribbled down his chin and some had dropped onto his burial suit.
Ty smiled. His teeth too, were bloodstained, with bits of meat and gore. Repulsed, Irene thought she was going to be sick. Then she saw what she hadn't been able to see when he had been kneeling and she understood why her mother had failed to answer her.
Her mother's head was partially severed, though it did remain attached to her body by a few strands of muscle and tendons. Her stomach was torn open. Her insides, what remained of them, were hanging out of the wound. This is what Ty had been slurping.
Ty's mouth moved. He was trying to talk, but nothing came out except for a few guttural sounds. Then he stepped towards her, lurching, his arms reaching for her. He smiled again. This time Irene saw how sharp his teeth were. Backing away from him and into her room, she thought of all the books she’d loved to read. They portrayed vampires as beautiful creatures, glittering in the sun, not as this creature that used to be her brother. The door didn’t stop him. She knew it wouldn’t. Her last thoughts were that she hoped the coroner didn’t sew her head back on. Maybe then she wouldn’t come back.
Copyright© 2011 Lisa McCourt Hollar. All rights reserved.


If you liked this you might like Flashes From The Grave, a collection of 13 stories that include vampires, zombies, cannibals and more.