Under The Big Top

This week’s vamplit flash fiction prompt is ghosts. You will find mine under the big top.

Under The Big Top
By Lisa McCourt Hollar 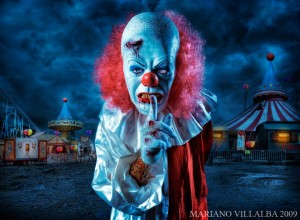 "See, I told you!" Tyler Jenson was pointing to the circus tent that was standing in the middle of the field. Paolo Guigini had scoffed when his best friend had told him the circus had finally come to Benson's Ridge.

"A circus? What the hell would a circus be doing out here? What you been doin', smokin' some of that wacky weed your daddy been growin'?"

"Piss off Paolo. Come on, I'll show ya."
Now Paolo was rubbing his eyes to be sure he wasn't seeing things. The circus tent, as well as the rides that always accompanied these attractions, shimmered brightly through the dusk.
"Wazzit doin’ here?" Paolo's mouth watered as the scent of popcorn reached his nose.
"I dunno. You wanna get a closer look?"
Sticking to the shadows, the two friends made their way across the field. The sound of a concertina reached their ears and Tyler chuckled, pointing to a monkey that was sitting on a platform between the Ferris wheel and the carousel.

"Would you like to have him play anything in particular?"
The boys jumped at the sound of the voice. Turning, they found themselves looking into the wrinkled face of the circus ringmaster. He had long, dark hair and deep blue eyes that were overshadowed by a pair of bushy eyebrows. His handlebar mustache reminded Tyler of the villains in silent movies.
"I'm sorry," Tyler said, fearing they were in trouble. "We just wanted to get a closer look."
"Of course you were," the man said, tipping his tall black hat. "You're boys. What boy doesn't want a closer look at a circus?"
"What are you doing here," Paolo asked. "The circus never comes to Benson's Ridge."
"Never? Well then you two are in for a treat. Tonight, we are here to entertain you! Where should we begin?"
Clapping his hands together, the circus master was joined by performers who seemed to appear out of nowhere. There were women in sequined costumes, a strong man in a leopard print leotard, a woman with a very impressive beard and clowns with brightly painted faces. There were several human oddities and some of whom didn't appear to be of human decent.
They all started calling to the boys, wanting to be the one chosen to perform. Before long the two of them were sitting in the big top. The ringmaster called out for the boys to turn their attention on the ropes overhead. A spotlight lit up and hovered over a woman sitting on a swing. Slowly she began gliding back and forth. Tilting backwards, she lifted her legs, positioning her body upside down. She hooked one leg on the bar, leaving the other to hang free. She swung back and forth and then leaped through the air and caught herself on another bar. Paolo applauded the daring move, spilling his popcorn on the ground. He couldn't remember the last time he'd had so much fun and wondered if he might not be a little high. The tent, and even the performers at time, appeared to shimmer, as though they weren't completely solid.
Tyler was equally enthralled, although he wasn't watching the trapeze act. On the other side of the tent some clowns were putting on an act. Two of the clowns had begun to fight, hitting each other with oversized boxing gloves. Then one produced an anvil out of thin air and dropped it on another. Tyler laughed as the clown appeared to fold like an accordion beneath the weight. Another clown joined the fight, pulling a gun out of a pocket. Tyler was impressed by the number of colored rags that were tied to the end, and then whooped with joy when the trigger was pulled and a sign that read BANG shot out. At the same time the other clowns head exploded and confetti flew into the air. Amazed by the special effects, Tyler wondered how they had worked the trick.
Another clown entered the ring at that point. He was dressed as the Grim Reaper and pulled behind him a guillotine. The clowns then surrounded Tyler, urging him to join them. Enjoying this new turn of events, Tyler willingly knelt and put his head into the stock.
Paolo didn't notice the show his friend was now participating in. He was fixated on the trapeze artist. She was now riding a unicycle across a rope while holding a torch. She stopped in the middle of the tight wire and balanced herself in place. Looking towards the boy, she smiled brightly as one of the clowns ran across the ring, lifted a bucket and splashed Paolo, soaking him.
The clowns and the ringmaster laughed at Paolo's startled reaction. The boy frowned. The liquid smelled like gasoline. Horrified Paolo turned to run. From the tightrope, the acrobat dropped her torch, the flames sparking to life around Paolo's body.
Tyler frowned. Why did he smell something burning? He didn't have much time to wonder. The guillotines blade slammed into his neck, separating his head from his body.
When the sun rose the next morning, the sheriff was summoned. Two bodies were in the middle of the otherwise empty meadow. The burnt body was unrecognizable, but there was no doubt it was Paolo, considering the headless body of Tyler Jenson next to him.
"Same as it was the last time." The sheriff was puzzled. This was a strange serial killer. He didn’t strike every year, sometimes going as long as ten years between attacks and always dumping the bodies in Benson's field. The same field that Sam Benson had condemned a circus troupe to death after catching his wife screwing the ringmaster. Driven insane, Benson had snuck into the circus grounds the night before they were to leave and set fire to the ringmaster’s tent. The fire had spread quickly. Some had speculated when the killings first began, that the ringmaster had survived. That was over a hundred years ago. If it was anyone from the circus, they’d have to be ghosts.
If you liked this story, you might like The Carnival, available on Kindle and Smashwords.