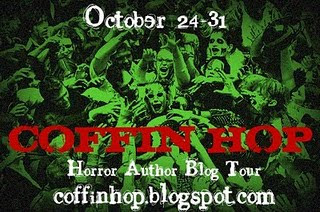 Day 4 of The Coffin Hop and the story continues. Comment on the previous stories and be entered to win free stuff.
Body Snatchers
by Lisa McCourt Hollar 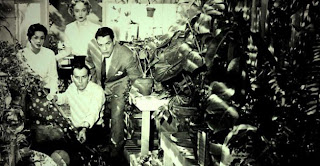 Tommy stared at the bathroom door of the Frank & Stein Halloween Shop. It was locked. Melinda had insisted on that, after Lame Wayne had shown them what was inside. Even though it was locked, Tommy could still see what was inside. The image of Mr. Sullivan lying on the floor, wrapped in that black, gooey stuff was burned into his mind.
Tommy liked Mr. Sullivan. He was always nice to him and last week he had given Tommy some free candy when he and his mommy had been in the store.
Melinda said that was the same black stuff she had found on Mommy and Owen. The stuff that made mommy smell bad and Owen to act different. Tommy didn't know if that was true though. He had been in his bedroom, playing with his dinosaurs, when Melinda came in and dragged him from his room.
Mommy had been yelling for them to come back, but Melinda wouldn't listen to her. Tommy had struggled so hard to get away and go to mommy, but Melinda wouldn't let him go, even though it was making mommy mad.
Tina said her mommy had the same black stuff. She said it wasn't her real mommy, but a fake one that had taken her real mommy away. She said she could still hear her real mommy inside of her her head and that her real mommy had told her to run.
But the only voice Tommy heard was the mommy Melinda was taking him away from. He loved her, even if she did smell bad. Tommy didn't mind things that smelled bad.
"Did you ever see Invasion of the Body Snatchers," Wayne asked. Tommy rolled his eyes. Wayne was so lame. He didn't know why his sister liked him.
"No," Melinda answered. She was rummaging through a first aid kit, looking for something to put on Wayne's arm. Tommy didn't know why she had cut him, if she was just going to fix him back up again. If she wanted to play doctor with Wayne, she could have pretended to cut him. She didn't need to do it for real.
Just like she didn't need to run over nice Mrs. McGraw. Melinda said mommy and Mrs. McGraw were bad, but so far Melinda was the one doing all the bad stuff.
"Your kidding," Wayne said. "It's a classic! There is this town and they are taken over by aliens. Pea pods are hidden under their beds and inside these pods are clones of all the towns people. When they go to sleep, the clones take their place. At first it is just a few people, but then it spreads until everyone is replaced."
"How did they defeat them," Melinda asked. She had found the peroxide and poured some on Wayne's arm while they talked. Tommy smiled when Wayne winced. He was glad it hurt. Maybe this was Melinda's plan all along, to torture Wayne.
"They didn't defeat them. The entire town was taken over. The pea pods won."
"Well these aren't pea pods," Melinda said. She was wrapping gauze around the cut on Wayne's arm. "That stuff wrapped itself around my mom and took her over. I found her when I woke in the morning, wrapped up like a butterfly in a coccoon. She was holding Owen and it covered him too. Then it started to vibrate and it seeped right into them. When they opened their eyes, I knew they were gone."
"You don't know that," Tommy screamed. "You don't know that! She wanted us to come back! She loves us."
"Oh Tommy, it is true," Melinda said, kneeling next to Tommy and trying to hug him. Tommy wanted nothing to do with it however. Pushing away from Melinda, Tommy went back to staring at the bathroom door. He thought he heard something in there.
"There must be a way to defeat it," Melinda said, turning back to Wayne. "This isn't a sci-fi movie. It is really happening. I don't know if it's an alien entity or some kind of mutation, but there has to be a way to stop it."
"So what do you think we should do," Wayne asked.
"Call the police."
"And if they're infected?"
"They can't all be infected," Melinda said, "can they?"
Tommy tried to tune his sister and her boyfriend out. It sounded to him like they wanted to hurt his mommy, like Melinda had hurt Mrs. McGraw. Or had tried to hurt Mrs. McGraw, because Tommy remembered how Mrs. McGraw had stood up again, that black stuff forming around her and making her better. Maybe the black goo kept you from dying. That would make it a good thing.
Tommy thought maybe he would like the black stuff to change him. When a caterpillar went into a coccon it came out different. It became a butterfly, which was so much better than a caterpillar, because it could fly. Maybe this stuff made people better too. And even if it didn't, he'd be able to be with his mommy again.
"Tommy, are you alright?" Tina put her arm on her friend's shoulder. She was worried about him.
"Just leave me alone."
Tina looked like she was going to cry. Tommy felt bad and almost told her to come back when she walked away. But then he noticed something. A hand was trying to wiggle under the door of the bathroom. Then it turned into black goo and oozed under the door.
Tommy looked at Melinda and Wayne. They were busy trying to figure a way to stop the goo. Tina was looking out the window. The goo flowed into the room and began sliding across the floor towards Tommy. Making sure no one was watching, Tommy moved forward, eager to join his mommy and Mr. Sullivan.

Comment and be entered to win a copy of Hidden Secrets, Whispered Lies. For more contests and free stuff, visit the other blogs on The Coffin Hop Web Tour.
Posted by Lisa at 11:56 AM