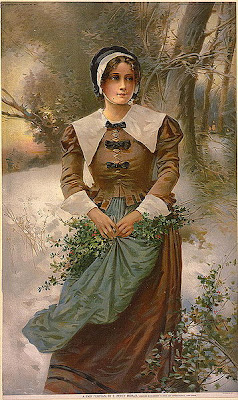 “How much did you say you paid for this” The contempt she was feeling oozed from Suezie’s mouth
Brandi shifted uncomfortably. “I didn’t. Quite honestly, it’s none of your business."
Suezie’s fingers brushed the woolen dress. It was ugly. Brown, with a large white collar it was- fancy-maybe-for the time period. Three brown bows decorated the front, along with a green apron. The dress was hanging on a dummy, surrounded by the other “treasures” Brandi collected. Hanging around the neck was a matching bonnet, typical of the Puritan era.
“And this dress belonged to Sarah Graves?”
“Yeppers.” Brandi was running her hands lovingly over the coarse material
“The witch, Sarah Graves?”
“That’s right.”
“And she died in this dress? How long ago was that?”
“Sixteen-Twenty-Three.”
“You don’t find it extraordinarily unlikely that a dress worn by a woman in 1623 survived nearly 400 years, and not even a burn mark on it?” Suzie’s words dripped with sarcasm. She couldn’t believe how gullible Brandi was. Last year she had bought a necklace, supposedly worn by Elizabeth Bathory. She hadn’t even had it appraised. Suezie had finally convinced her to take the pendant to a jeweler, who declared it a fake.
That hadn’t fazed Brandi. She continued to spend her inheritance on questionable items in order to sustain her macabre collection. This included shoes worn by Lizzie Borden, a nurse’s uniform worn by Beverley Gail Allit, a wedding ring belonging to Mary Ann Cotton and a tube of lipstick, reportedly belonging to Die Hexe Von Buchenwald.
“She wasn’t burned at the stake. She was hung. Just before the hangman dropped her, she vowed to return on day from the dead. They gave her dress to her daughter, who passed it on to her daughter, who did the same. I am lucky Samuel Graves is a gambler and needed the money.”
“Please tell me you are not wearing that thing to the costume party.”
“I am!”
“Brandi, it’s not appropriate? This party is for disadvantaged children. Your costume is in poor taste.”
“Of course it’s appropriate. Sarah Graves loved children.”
Suezie felt sick at the choice of words. She knew exactly how Sarah Graves felt about children, as did everyone who lived in Woods Hole.
Like Elizabeth Bathory, Sarah Graves believed bathing in virgin blood would keep her beautiful. Sarah preferred the blood of children, both male and female; the younger, the better. Over the course of her madness, many children went missing. The town was heavily wooded and hungry animals were known to roam close to town, so it was believed they’d been dragged off by the wildlife. Many animals were hunted, nearly to extinction, in order to protect the town. When Sarah kidnapped a baby, the town went crazy. They organized a search party and found their way to her cabin. The witch was in the process of skinning the baby alive when they busted down her door.
Later they discovered she had fed the murdered children to her daughter. The town’s people called for the death of Mary Graves as well as Sarah’s, but her young age convinced the town leaders to spare her. Mary was turned over to the church to be raised.
That they would allow her to keep her mother’s dress was doubtful, but Suezie knew Brandi would believe what Brandi wanted to believe. Her obsession with female serial killers deeply disturbed Suezie and she wondered if it didn’t border on psychosis.
***
Suezie was manning the apple bobbing station when Brandi walked in. True to her word, she was wearing the dress. As an added touch to the costume, she was carrying a knife.
“Brandi,” she called, catching her sister’s attention. “Could you come over here and help? I need to get more apples from the kitchen.”
Brandi stared at Suezie. Her eyes appeared to be glazed and lifeless.
“Just great, I bet she’s high. Typical Brandi.”
Crossing the room, Brandi’s gaze flitted over the activity in the Community Center. Amy Carmichael was chasing a ball across the floor and didn’t see the woman as she stepped into her path. The girl crashed into Brandi, nearly falling backwards. Catching the toddler, Brandi lifted her off the floor, gripping the child by both her arms. Suezie’s heart skipped a beat. Brandi still held the knife tightly in her hand, the flat side of the blade pushing into Amy’s arm.
“Brandi!”
Frightened, Amy cried as Brandi studied her. Seeming to realize the girl’s discomfort, Brandi set her down and patted the top of her head. “It’s going to be alright Mary,” she whispered to her before turning and continuing across the room.
“What the hell is wrong with you, Suezie asked. “Are you on something?” Grabbing her sister’s chin, she turned her face so she could see her eyes. Were they dilated?
A sharp pain pierced her stomach and Suezie gasped, clutching at her middle. Something warm and sticky sloshed over her hands. Looking down, she felt a wave of dizziness wash over her, before her knees buckled and she joined her intestines that were pooling on the ground.
Brandi yanked upward with the knife, opening Suezie all the way and allowing more of her to spill out. She stared at the knife, confused. Why had she disemboweled her sister? Then she saw the child standing next to Suezie, an apple lodged into her mouth like a roasted pig, her eyes wide with fear and Brandi remembered her purpose. Sarah’s purpose.
The witch was back, her spirit absorbing into Brandi as soon as she donned the dress. Grabbing the child by the hair, she slit her throat before the apple hit the ground. Welcoming the life sustaining blood, Sarah smeared it over her face, coating her hair with it and lapping the blood from her hands. When she was finished, the resurrected witch turned to choose her next victim from among the screaming children, who had just discovered that the doors were locked shut.
Word Count: 996