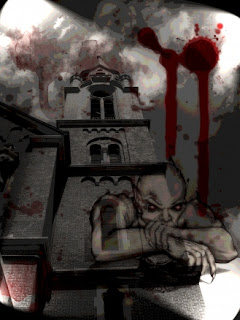 The only warning came from the old, blind fortune teller. Blocking traffic, she stood in the middle of town, screaming that we were at the dawning of a new age.


“Babylon will rise,” she cried, “carrying the master to his throne! Accept his reign or be sent to slaughter!”


Pointing a gnarled finger, her milky white eye boring into the offender, the witch continued, “Your flesh will feed his army. Your bones will fortify his tower. Your child’s blood will be used to cleanse him and all mankind will curse your name.


They took her away, placing her in the sanitarium. Despite the disbelief, a quiet settled over the town. As evening came, a feeling of unease began to grow, even among the animals. Once calm dogs growled at shadows, felines hissed at invisible prey and the livestock brayed restlessly in the barns.


Blood covered the moon that night. Darkness spread across the heavens, blotting out the stars, its shadow covering the earth in darkness. Children cried, hiding beneath their blankets, their mother’s unable to comfort them. Then the earth began to move.


“Did you feel that?” Martha looked at her husband, holding their only child in her arms. Mathew had been crying since nightfall, refusing to sleep in his room.


“There’s a monster in my closet,” he’d insisted.


“Mathew, there are no such things!” But despite her insistence, he had refused to cross the threshold into his room. Finally she gave up, holding her son close to her on the couch and trying to watch her favorite show on the television.


No matter how hard she tried, she couldn’t lose herself into the drama. She couldn’t get her mind off the old woman.


“I’m telling you,” she was saying to her husband, “it was the freakiest thing I ever saw. I half expected her head to start spinning and snakes to come out of her mouth.”


“Martha, you’re exaggerating,” Thomas said. “She’s just old and a little off in the head. There’s nothing to…”


“Yeah, I felt that,” Thomas said, looking around. This was Virginia and earthquakes weren’t common, but there had been a few recently. “Must be another quake. Get under the table.”


Martha stood, just as another tremor shook the floor. She held onto Mathew, trying to keep her balance. The floor seemed to tilt backwards and she found herself lying on her back and sliding across the room. She came to a stop when her head collided with the wall.


Wrapping her arms around Mathew, she struggled to get to her feet, shaking her head. She felt dizzy. Where was Thomas? Mathew clung to her, his arms holding tightly to her neck.


“Mathew, it’s going to be okay,” she whispered to her son, trying to soothe him. “Thomas, where are you?”


Thomas didn’t answer. Martha took a few steps towards the table. He must have dived underneath when the shaking began. Then she stopped short, sucking in her breath at the sight of the fissure that had opened in the middle of the living room.


“Thomas?” Her voice shook. Cautiously she approached the opening. “Thomas?” Setting Mathew down on the couch, she leaned close, trying to see if her husband might have fallen in. “Oh God,” she thought, “what will I do if he did?” Looking over the ledge she screamed. Thomas wasn’t there, or at least she hoped he wasn’t.

The demon climbing through the fissure smiled at Martha, his teeth a row of fangs. Below him, a river of fire flowed and the screams of the damned reached out to Martha, calling for her to join them.


Turning to run, Martha grabbed Mathew from the couch and told him to hang on. “Don’t let go baby,” she pleaded, heading for the door. The ground had begun shaking again. Steadying herself against the wall, Martha made her way to the door as her house began to fall inwards. Mathew sobbed into her neck.


Flinging the door open, Martha stepped out into chaos. Her neighbors were fleeing their homes as well, many being set upon by monsters and demons that were pulling themselves from the earth. She saw her best friend, her mouth open in a silent scream, while one creature fed off of her. It tore her throat open, drinking her blood. When finished, he bit into her face, pulling away tissue and muscle, tilting his head back and swallowing.


“My God,” Martha screamed, begging for some sanity. She was answered by another upheaval of the ground and another fissure opened in front of her, the full spectrum of the opening threatening to swallow the town. Falling backwards, she shook her head, her mind breaking. She couldn’t accept what she saw.


The tower rose from the earth, thrusting itself into existence, a jutting cock from the pit of hell. Standing atop the tower was a beast, horns jutting from its head, cruel eyes staring out, black as coal. His skin was a deep red, almost black, so dark was his color.


Next to him stood his bride, the old witch, though she was no longer old and no longer blind. Her hair spilled over her shoulders, brushing across her breasts, which were bare. She held against her a baby, suckling him against her tits, but no baby the likes of any Martha had ever seen. This child bore horns like his father and had a mark on his forehead, three intersecting triangles. His teeth were razor sharp and they dug into his mother’s flesh, pulling blood for sustenance. The witch smiled down at Martha. “So,” she asked, her voice hard, “do you still think I’m an old bat?”


The last thing Martha heard before she died was the anguished cries of her son.