Day 5 of The Coffin Hop. 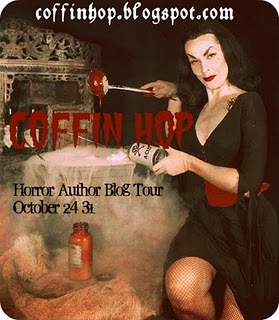 Trapped
By Lisa McCourt Hollar
Tina blinked back the tears. She knew Tommy hadn’t meant to hurt her feelings. He was scared. Her mommy had told her once that people hurt other people when they were scared. It didn’t make sense to her. When she was scared she wanted someone to hold her. She was scared now. These scary fake people made her want her mommy to pick her up and hold her. Only that wasn’t going to happen, because her mommy was one of the scary fake people now.
She could hear her mommy though, except inside of her head. That scared her a little. You weren’t supposed to hear voices in your head, just your own, when you were thinking or pretending something. And if she could hear her mommy, but not see her, did that mean her mommy was a ghost? That scared her more than anything, but still, she listened when she heard her voice. Mommy had told her to run from the scary fake mommy and she had. Now she was with Tommy and his sister, Melinda. Melinda was almost growed up. She would figure out what to do.
Tina’s mommy was telling her something now. She told her Tommy was in trouble.
“Stop him.”
Tina turned around and screamed. The black stuff that was making all the fake people was moving across the floor and Tommy was walking straight towards it.
“TOMMY, NO!”
Melinda nearly fell off the stool she was perched on. That little girl had a scream on her that could wake the dead. When she turned and saw what Tina was pointing at, she did fall off the stool. Picking herself up off the ground, she sprinted full speed across the floor and wrapped her arms around Tommy, lifting him into the air.
“What do you think you were doing?” She hugged her brother to her, tears falling as she backed away from the strange liquid.
“I want to be with mommy.”
“That thing isn’t going to take you to mommy. She’s gone. I don’t want to lose you to.”
The goo had stopped moving across the floor and started to bubble, rising up off the floor. Reaching for Tina’s hand, she jerked her head towards the front door and said to Wayne, “Let’s go. Now.”
“Please don’t.”
Mr. Sullivan stood there now, where a moment ago the ooze had been.
“Stay away.” Melinda pulled Tommy tighter to her, holding onto him despite his struggling to be put down.
“We don’t want to hurt you.”
“You hurt my mommy!” Tina glared angrily at Mr. Sullivan, or what appeared to be Mr. Sullivan.
“Please, just come with me.” Mr. Sullivan held his hand out, black liquid oozing from the fingertips. “It won’t hurt.”
Melinda backed away from the doppelganger, moving towards the front door. Then a jingle at the door told her someone else had entered. Turning, she saw her mother and Owen.
“Mommy!” Tommy reached his arms out to the woman, increasing his effort to escape his sister’s grasp.
“Come home,” Owen said, the words sounding a bit distorted, as they came from the mouth of a baby only two months in age.
“Stay away from us,” Melinda said, backing away. She looked around. With Mr. Sullivan on one side and her mother on the other side, they were trapped.
“Is there a back door,” Tina whispered.
“Through the break room,” Wayne answered, thinking to himself that this girl was smart. If this was the zombie apocalypse, he was glad to have her with them.
Mr. Sullivan moved to intercept them. Thinking quickly, Melinda kicked over the bucket of mop water. She didn’t think it would stop him, but she hoped it would slow him down so they could get away. When the man/thing began screaming, Melinda was surprised to see him on the ground, the black ooze pouring out of him.
It reminded her of a The Exorcist. Mr. Sullivan’s mouth was open and he was vomiting black gore. It was also coming out of his ears and nose. Even his pores were excreting the foul smelling liquid. Across the room, her mother and brother were backing up, their eyes terrified.
“What’s going on,” Tina asked. Her voice was shaking and Melinda was afraid she would lose it at any moment.
“The mop water,” Wayne said, “it must hurt whatever that stuff is.”
“Water? All we need is water?” Melinda sounded doubtful.
“Not water,” Mr. Sullivan said, standing up. The black stuff was on the ground and moving away from them as fast as it could. “Bleach. That was what was in the water.”
“Mr. Sullivan,” Wayne asked, “is that you.”
“Of course it’s me, boy. And next time you leave Frank in charge of the place so you can go screw your girlfriend, you’re fired.”
“How did you know.”
“I had an alien inside of me. I know everything it knows, including why it is here and how to get rid of it.”
A screech at the door caught their attention. Looking outside they saw the parking lot filled with friends and neighbors they recognized. The black ooze dripping from their fingers indicated they were not the same as they remembered them.
“So what do we do,” Melinda asked.
Before Mr. Sullivan answered, Tommy kicked Melinda. Surprised, she loosened her grip and he wriggled out of her arms. Before she could grab him, Tommy was out the door and running towards their mother. The woman greeted him, wrapping him in her arms and allowing the substance that had taken over her body to flow out of her and over Tommy.

Comment on the post and get entered to win a copy of Halloween Frights. Also, make sure you visit the other blogs in the Coffin Hop for a chance to win more free stuff.
Copyright© 2011 Lisa McCourt Hollar. All rights reserved. 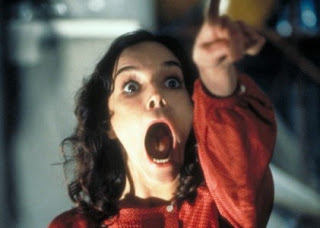