Today's Vamplit Friday Flash theme is Visions of Hell. The Monthly theme is Medieval Torture.  Sue Mydliak did the artwork. Be sure to check her out. She is an amazing artist and author. Her book, Bithright, is a unique story and one I enjoyed reading.
Dark Magic
by Lisa McCourt Hollar 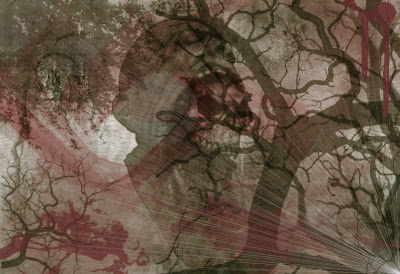 Tearing through the forest as fast as he could, Ulric's heart raced, the rushing blood in his ears keeping time with his feet. The terrified apprentice barely felt the sting of branches whipping across his face, nor did he notice the blood that trailed down his forehead and into his eyes. When the crimson drops blurred his vision, Ulric wiped the liquid from his eye, unaware he had even performed the action.
Around him, Rowan's laughter filled the Devil's Fortress, echoing off the cursed trees and meeting Uric at every turn. Rowan seemed to be taunting him; testing the boy's resolve to escape his fate.
There was no other sound in the forest, save the Sorcerer's laughter. Even the sound of Ulric's feet snapping branches in his attempt to escape, faded into the background. Nothing but fear existed.
"Ulric, why are you running from me?"
The pain that shot through his head sent Ulric tumbling to his knees.
“Have I not cared for you these past few years? Am I not your master?”
Instinctively Ulric covered his ears, attempting to block the voice, even though the words had only been projected inside of his head.
"Get up Ulric and look at me."
Ulric continued staring at the ground. He knew his mind would shatter if he had to stare into Rowan's face once more. As long as he refused to look, he could still convince himself that this was just a dream; a nightmarish vision of hell that would disappear when he woke.
"Look at me."
Rowan felt cold hands on his shoulder. Squeezing his eyes shut, he prayed. He repeated the prayers the monks had taught him when he first entered the monastery, prayers that had replaced the ones his mother had sung to him as a child.
Fingers wrapped around Ulric's hair, twisting the locks and pulling upwards, forcing him to his feet. Rough, cold hands on his shoulder spun him around, so that he was facing his master. Owen kept his eyes shut, refusing to give in to his master’s command.
"Open them, or I will burn your eyes from your head and force your whore of a mother to eat them."
Ulric trembled, his resolve beginning to fade. Crossing himself, he prayed for strength. The heat that seared his cheek, close to his eyes chased the last of his will away. Opening them, Ulric stared into Rowan's face and screamed. The last thing he thought before he passed out was how wrong the monks had been. There was no salvation, only death and damnation.
***
Ulric's arms ached. His mother's voice called to him, urging him to wake up. Ulric tried to ignore her, but she was insistent, prodding and poking at him.
'Damn that woman to hell,' he thought.
She poked him again, her voice seeming urgent. It was always urgent with her though.
"Ulric, wake up."
There was something wrong with her voice. It didn't sound the way he remembered. And why was he home anyway? He had left their cottage three years ago, to apprentice himself to God’s work. He should be in the monastery. And why did his arms hurt so much?
"Ulric, open your eyes."
"Rowan," Ulric's mind screamed. Opening his eyes, he looked around, terrified. Rowan stood there, prodding at him with a sharp object, his colorless lips stretched into an evil grin.
"You're dead," Ulric whispered.
"So I am. But not quite completely dead."
And it was true. Rowan had died several months past, put to death by the Queen's Bishop. Rowan, the Royal Priest, had been accused of sorcery and of putting a spell on the Queen, leaving her barren and unable to produce an heir. Ulric had refused to believe it, defending his master, even as Rowan was tied to the pyre and set aflame.
And then, this morning, he had woken to find Rowan standing over his bed. He wore robes and his head was covered by a hood, but Ulric knew it was him. Then Rowan removed the hood, revealing his face. It was a skull. His flesh had been burned away by the fire.
Horrified, Ulric was pulled from his bed and carried to the Devil’s Fortress, to what ends he knew not, but he feared it was un-holy. His former master, the priest he had admired and wished to emulate, was a liche, come back to life through magical means. He was a demon, having forged his alliance with Satan and Ulric would have naught to do with it. He had escaped. Now though, his flight proved pointless, as he was at Rowan’s mercy once again. Rowan was speaking, though Ulric could scarce hear his words through his anger building inside.
Cedric became aware that he was naked and that his arms were strung up over his head, the source of his pain. They were tied to one of the trees and pulled tight. His legs were similarly bound, tied to a large root that protruded from the ground.
"What do you intend to do to me?"
"The greatest honor," Rowan said, bowing to Ulric and mocking him. "You shall be sacrificed so that I shall live whole. It will not do for me to be seen like this." Rowan indicated his face, devoid of muscle and skin. Then he opened his robe, to reveal the rest of his body, similarly impaired. "Soon I will be whole again.”
"I don't understand," Ulric said, but then he saw the small knife in Rowan's hand and he did. His screams echoed through the forest, but there was no one around to hear him. He begged for Rowan to kill him, but the Sorcerer said that wasn't possible.
"It is your fear and pain that makes the spell work."
Rowan started at the top of Ulric's head, carefully inserting the knife. Flaying skin was a delicate art and he needed his new skin in one piece.
Word Count: 990
Copyright© 2011 Lisa McCOurt Hollar.  All rights reserved