The Institute
By Lisa McCourt Hollar 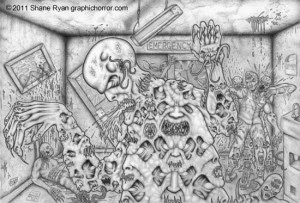 Shane Ryan is a self taught artist specializing in intricately detailed realist horror art, his works range from imaginative creature portraiture, dark twisted surrealism and scenes of macabre horror.
His works have been featured and published by the likes of Fangoria, Goremaster, Horrornews, Fatally Yours, Midnight Echo and Scream Horror Magazine.
Ryan’s preferred mediums are pencil and ink, but he has also recently been dabbling in photography and digital art, of late he has contributed his skills to film story boarding, concept art, as well as working on his own personal collections and is always keen to hear from people about any new projects they may have for him.
His fine art collection, plus merchandise, as well as info about his illustrative services can all be found at his personal website.
Shane’s Website: WWW.GRAPHICHORROR.COM

The Institute is Copyright© 2011 Lisa McCourt Hollar. Infestation is copyrighted© by Shane Ryan and is used with permission of Shane Ryan and Vamplit for purpose of Friday Flash Horrific Visions theme.