Terror In The Woods

Terror In The Woods
By Lisa McCourt Hollar 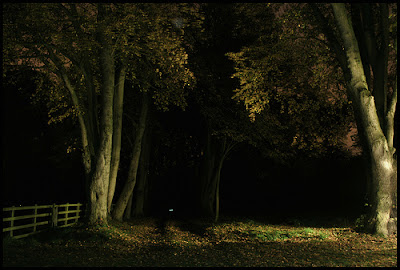 Frightened, Cedric tried to slow his breathing, as the man with the axe strode by. His big feet narrowly missed his hiding place. Cedric shrunk back, his heart beating a mile a minute. He thought for sure it would explode from his chest. The man stopped, his feet just inches from Cedric's face. Turning 90 degrees, the man, a crazed look on his face, scanned the area, searching for any sign of his prey.
Cedric held his breath, holding still and willing his heartbeat to slow, or at least not beat so
loudly. After what seemed an eternity, the man turned once more, moving off in the other direction. Cedric breathed a sigh of relief, listening as the man moved deeper into the woods and out of sight. Silently, Cedric crept from the bush he'd been hiding in. He hurried away from the man and the deadly axe as quickly as possible.
"What the hell," he thought, "had the world gone insane?" At least now he knew what had happened to his friends. Over the last week, they'd been disappearing one by one. The only thing connecting the disappearances was the woods. Each one of his friends had been seen entering, shortly before they vanished, seemingly in thin air. Cedric had led a search party himself, but there were no traces of the victims to be found. That they were victims was a certainty and now he knew this for a certainty. Cedric just hoped he'd be in time to warn the others of the menace that waited for them in the woods. He prayed his wife was safe and hadn’t ventured out.
"Please," he begged, casting a quick glance heavenward, "for once let her have listened to me and stayed inside, instead of running off half cocked, like she usually does."
Cedric should have kept his eyes on the trees ahead and not the sky. Rounding the bend that would take him home, the frightened husband ran head on into the axe man's partner. He thought he'd lost him by the river, north of here, how had he made it back this way so quick? Cedric turned to flee in the other direction, but he wasn't quick enough. He felt the killer's hands close around him, his meaty fingers digging into his neck.
Cedric struggled, trying to free himself from his captor, but to no avail. This man was younger than the other killer, stronger and bigger. He held on tight as Cedric twisted, kicked and even tried to bite him. Unlike the first man, this one didn't relax his grip. Instead, he lifted Cedric off the ground, carrying him in the direction the older man had gone.
Trying a different tactic, Cedric went limp. Maybe if the psycho thought he was defeated he would let his guard down. It was then that Cedric realized the true horror. The man, this monster, wore a belt around his waist and clipped to the belt were several trophies’...rewards from his hunt. Cedric recognized the face of his best friend, his head hanging from the belt, nothing more than a treasure for this man to show off.
Cedric renewed his struggle but there was no escape. The man was too strong and Cedric too weak from the chase. Despair washed over him. He knew this would be the end. His heart ached. Cedric thought of his wife, hoping she would be okay without him. They had no kids. He choked back a sob knowing that he would leave no heir behind. There would be no one to carry on his name.
Shaking him like a rag, his captor called out to the other, having caught up with him. His voice sounded like a gunshot, disturbing the eerie silence that had come over the woods. "I caught him!" He shook Cedric again for emphasis. "I caught him! Can I be the one to chop off his head?"
The eagerness that was in the man's voice turned Cedric's stomach. The other man strode over to inspect their captive, a smile plastered onto his face. The axe shined in the moonlight, the sharpened steel resting on the burly man's shoulder. Reaching his partner, he lifted the axe and handed it to the younger man.
"Good job son! Your mom will be real happy. It's just not Thanksgiving without turkey"
THE END
(Poor Cedric. He will taste good on my dinner table though.)
Copyright© 2011 Lisa McCourt Hollar.  All rights reserved