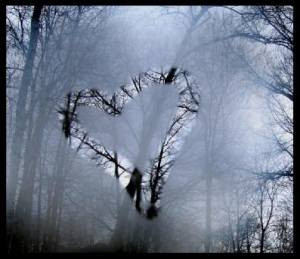 On the Eighth Day of Creepfest, my true love gave to me...

The following is my entry for Tuesday Tales. I am not one for romances, but this one has a bittersweet ending.

Tears streamed down Theodora's face. Her breath fogged the window as she watched her sisters drag John into the woods.

"He will survive," she whispered, wishing the lie to be true.

She shuddered, recalling how Willimena had burst into her room, angrily calling for Sadie and Snickerdoodle to come see Theodora's betrayal.

"No sister of ours will mate with a werewolf," Willimena spat.

It was forbidden for a lycan to touch royalty. Theodora knew as they dragged John off, that they would kill him.

She drew a heart in the fog.

In the distance, there was howl and then silence.