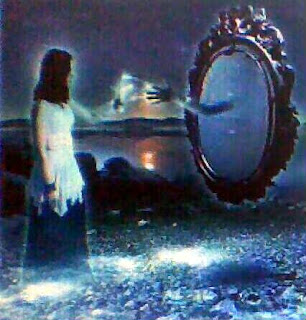 I am writing a very adult vampire novel called The Legend of Graystone Manor. As a side project for my daughter, I am writing YA appropriate spinoff stories. At the moment they are a hodgepodge of stories that will eventually come together. This story is about Sage, one of the characters. There is a lot of backstory, just to catch anyone up not familiar with Sage. I came up with this story today, when my daughter showed me a fantasy picture she found on google. I think in the next few days I will try and connect the events into a more cohesive story.

Behind her, Sage could hear Linda's dog pursuing her through the swamp. She stumbled, a small scream errupting from her mouth, before she managed to catch herself. Looking over her shoulder, she prayed that he hadn't heard her. She was counting on the wolfsbane that grew around the swamp, to cover her scent, but if the werewolf had heard her, he would be on her in seconds.

Pushing her way underneath the roots of a tree that were sprouting from the ground, Sage listened for the sound of the wolf. She had no wish to fight him and wasn't certain that she would win if it came to that. She had recently discovered that she wasn't quite the normal teenager she thought she was, but she hadn't had much time to sort out what she could and couldn't do. A fight with a werewolf wasn't the way to find out.

Besides, she liked Mike, when he wasn't all hairy and snarling. She knew he didn't want to hurt her. It was Linda that was making him chase her. It was Linda that had caused everything to go wrong in the first place, first breaking the Covenant between the Vampires and the human's, even though most human's didn't know about the Covenant that protected them. Then she had decided to challenge her father for the right to lead their coven. But she couldn't just challenge him outright. She wanted to destroy him by restarting the war between Lycans and Vampires. And if the Changlings and the Spirit Gliders didn't stop her, the world would be forever changed. Because Linda's plan once she becomes the head of Graystone Manor, is to make humans into slaves.

Sage was one of the Spirit Gliders. She found that out last New Years Eve, when she followed a cat into the old sewer system that ran beneath their town of Fairview. Only he wasn't just a cat, he was a boy and had been watching her through her window. That had scared the crap out of Sage when she saw him there. Then when he jumped from her balcony to the street below, turning into a cat in the process, she was sure she was losing her mind. Of course she hadn't seen anything yet. The boy was a Changling and Tia, the woman that led them had told her she needed to help stop this war that was coming. Because she was a Spirit Glider and because her best friend Jayne was in danger.

Jayne who had died a few months earlier. Jayne who Sage was to learn, wasn't completely dead. She was a vampire and was working with James to stop Linda. Which is how Sage ended up in the swamp, being pursued by a very hungry werewolf.

Sage held her breath when she heard a splash almost right next to her in the water. The musty smell of wet dog reached her nose and she thought she might retch, if he didn't move on. Then she saw him. He was standing in front of her hiding place, sniffing the air. He turned in her direction and for a moment, Sage thought he was looking directly at her. Then he sniffed the air again and leaped, jumping over the old roots and heading back towards Graystone Manor.

Sage waited a heartbeat or two and then pushed her way back out and ran in the opposite direction. Tia had told her that there was help for them in the far side of the swamp. She was just beginning to think Tia was mistaken, when she saw the remains of an old cemetary. That wasn't the weird part though. Hanging at the edge of the cemetary was a mirror. That it was controled by something supernatural was an understatement. It was floating in the air, attached to, well, nothing. It just hung there above the ground like it was waiting for her.

Sage stepped up to the mirror, puzzled. "What am I supposed to do," she wondered out loud.

In answer to her question, the mirror rippled and a hand reached out. Sage yelped and took a step back, but the hand stretched towards her and pulled her in.