This Months Vamplit Friday Flash theme is the Circus and Freakshows are this weeks theme. Please enjoy.
The Snakeman
By Lisa McCourt Hollar 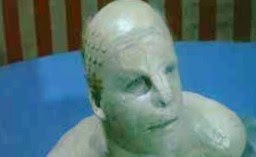 Sharona was in love. With each thrust that Leo delivered, she screamed out his name, begging him to keep going. Her body began to shake as Leo plunged into her one last time. Hanging onto him, Sharona dug her fingers into his back and rode out the orgasm.
“Oh my God, that was amazing.” Kissing his neck, she slowly moving up to his chin, searching out his mouth. Her tongue flicked across his skin and she paused, puzzled. It was rough...scaly.
Pushing away, Sharona swiped at her tongue with her hand. Rolling her eyes, she looked towards Leo and froze. His skin, no longer smooth, was covered in scales. He was watching her, his eyes staring into her’s...waiting. They weren't Leo's eyes. Leo’s were green and made her melt when she looked into them. These eyes were yellow, serpent like and made her skin crawl. When a forked tongue slipped out of his mouth, Sharona screamed.
“Sharona, wake up.”
Opening her eyes, Sharona looked into worried, green eyes.
“You had another nightmare.”
“It wasn't a nightmare. He was here. Again.” Sharona reached for the bottle of water next to her bed, desperate to wash the taste out of her mouth.
"And what...I just lay here sleeping while another man screwed you?"
"Raped me."
“From what you've told me, it's the best sex you ever had. Right up until I turn into a snake.”
“I told you, it wasn't you, it was him.” Sharona shuddered at the memory of the Snakeman slithering on top of her. She looked away from Leo, afraid to see the mixture of pity and disgust in his eyes.
Sliding across the bed, Leo put his hands on his girlfriend's shoulders, turning her around so that she was facing him. "I made an appointment for you to talk to a psychologist. Promise me you will go. Please."

Sharona sighed. "Fine."
Leo pulled her to him, wrapping his arms around her. Sharona stared over his shoulder at her reflection in the mirror and the patch of flaky skin just above the bridge of her nose.
***
It was raining out. Maneuvering the highway, Sharona kept her eyes focused on the road. It was noon, but it looked closer to evening. The circus would still be open though. There was always something under the Big Top. It was the freak show that drove her out into the rain though, traveling nearly a hundred miles to Grover City. That was where Lombardo's Circus was. After today, they would move on to Florida. It would be three more months before they came back this way. She wasn't willing to wait another three months to confront her stalker.
Sharona had first seen the Snake Man, when the circus came to her town. Leo was working, but she had gone with some of her friends. They were getting ready to leave, when she had seen the sign for the Freak Show.
"Come on, let's go in. It will be fun."
Her friends had agreed, but it was obvious they weren't getting the same enjoyment out of it that she was. When they got to the last attraction, they headed straight for the exit. Sharona hung back, captivated by the man covered in scales. He was sitting in a pit filled with snakes and the sign read, SNAKEMAN. He was, according to the sign, the offspring of Lucifer and Medusa. Sharona knew it was just a costume and cleverly applied makeup, but then she felt him in her head. He was whispering to her how beautiful she was. She felt his arms around her waist. She was in the middle of the snake pit with him.
"You are mine now. You will be my mate."
Then she was back outside the pit and her friends were telling her to hurry up.
That night the dreams began. She shrugged them off at first. Then she found a scale lodged between her teeth when she was flossing. She showed it to Leo, but he reminded her that they had eaten fish for dinner.
"Someone must have missed a scale when they were cleaning it."
When her skin began to change, Leo blamed it on too much time in the sun. Only Sharona knew the truth; the Snakeman was changing her.
The parking lot was nearly empty. Parking as close to the entrance as she could, Sharona bought a ticket and headed straight for the Freak Show.
***
Leo finished boxing up Sharona's belongings and loaded them into the car. It had been nearly four months since she'd vanished. She hadn't even left him a note. She just walked out one day and drove off in her car. The police looked for her, but after a while they stopped. Finally he came to the same conclusion everyone else had. She'd left him and she wasn't coming back. He didn't blame her. Sharona's mind was disturbed and she had been retreating further and further from him every day.
Loading the last box into the car, Leo pulled out of the parking lot. He was taking them to her parents. He'd met someone else and she would be moving in over the weekend. Passing a sign that pointed the way to a circus, Leo slowed down. Surprising himself, he turned in the direction the sign pointed, until he came to the circus.
Walking down the main fairway, he looked at the many offerings. A sign for the freak show caught his attention. He hesitated only a moment. The snake pit was in the last room. Inside was the man that had haunted Sharona's dreams. A woman sat next to him, her yellow eyes staring into his. Leo took a step back, the intensity of the gaze frightening him. His heart hammered in his chest and his throat tightened. Looking for the sign, he found it. Leo looked back at the Snake Woman, feeling as though he were going insane.
The sign read, THE SNAKEMAN AND HIS MATE, SHARONA.
Word Count: 998