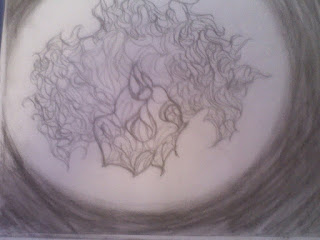 His name was Milo Scaggins. He was just minding his own business when a dragon appeared and tried to to have him for dinner. You didn't live in the Shadow Realm and not be prepared for the unexpected, so Milo pulled his sword from its sheeth and waved it at the beast.
The dragon roared, sending flames towards Milo.

Conceding that the dragon had the better tactical advantage, Milo decided to go with Plan B. Turn tail and run. What wasn't expected was to find two children standing in his path. Milo nearly fell over the girl, falling backwards instead and landing on his rear. This turned out to be a good thing, since he avoided the flames that went shooting over his head.

"Now that wasn't nice," the girl said, scolding the dragon. "I warned you what would happen if you didn't play nice."

"Penelope," the boy said, "It isn't wise to threaten a dragon. Take us home now."

Penelope, shook her head. "Things have just started to get fun."

Behind Milo, the dragon roared again, this time without shooting any flames.

"It's too late for sorry. You can't just go around trying to barbeque rabbits, even ones with swords."

Lifting a gem to her lips, Penelope whispered, "Butterfly."

To Milo's astonishment, the dragon shimmered and began to change shape. When the transformation was complete, Milo laughed taunting the diminished creature. "Who has the better tactical position now?"

The butterfly responded by spitting a fireball and singeing Milo's ears.

This is a continuation of Penelope's Way, which can be found at http://www.lisamccourthollar.com/2011/11/penelopes-way.html

The picture is courtesy of my daughter, Sarah Sprague. Aint she talented?!?