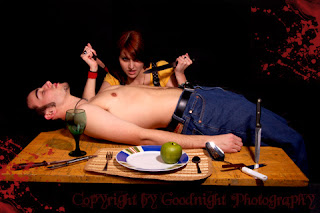 Humming to herself and sashaying to the salsa music playing on the radio, Stella was in a good mood.
"You know," she said to her neighbor who was sitting at the kitchen table, "I love to salsa, especially when I'm cooking."
Kim didn't answer, but Stella didn't mind. The two hadn't been the best of friends. Their fights were famous around the neighborhood and if anyone had seen them together now, they would have been shocked. Stella was glad though that they were working their differences out.
Filling in the silence, Stella said, "I tried to get Howard to take salsa lessons with me, but he hates dancing. He's more comfortable sitting in front of the telly with a beer in his hand. So I took them on my own. That's how I met Stan."
Finished with the onions, Stella placed them in a bowl and stared out the window. Sighing, she said, "Stan is the one that showed me how Howard was just holding me back. When I first started my affair with him, I was only looking for a little fun. Instead, I found my soul. He's coming for dinner tonight. I think you'll like him."
Kim's eyes widened and Stella laughed. "I know, it takes some gall to have your lover come to dinner with your husband, but somehow I don't think Howard will mind. Will you Howard?"
Stella reached into a bag and pulled her husband's head out, waving it gleefully in her neighbor's face. Trying to push herself away from Howard's severed head, Kim's eyes nearly popped from their sockets. Her throat strained, attempting to scream, but all she could do was make panicked grunts through the duct tape covering her mouth.
"Awww, what's the matter Kim? Don't you think he looks good?" Stella pushed Howard's head towards Kim's face, mashing his lips against her skin. The blood had already drained, so their wasn't any gore to drip on the woman, who seemed close to having a heart attack.
"Don't you want to kiss him, Kim? You didn't seem to mind last night, when he was panting all over you."
Sobbing now, Kim's eyes filled up with tears that spilled over and ran down the side of her face. Then a door at the front of the house slammed shut, causing Kim to jump. Hope shined in her eyes when a voice called out, "Hey mom, I'm home!"
"Straight to your room, young lady," Stella called out. "You have homework to do." She shook her head when a few moments later the sound of some metal band came blaring into the kitchen. "I swear, Miranda is going to ruin her ears."
Kim made some more noise through the duct tape and Stella tilted her head, trying to make out what she was saying. "I'm sorry," she said, shaking her head, "I don't understand. Maybe when Stan gets here...he is a speach therapist. He's good at figuring out what people are saying."
Ignoring Kim's muffled outburst, Stella began dicing something that looked like a heart. "It's Howard's," she explained. "I was actually surprised he had one."
Stella laughed at her joke, but when Kim didn't join in, she shook her head. "I don't know about you Kim. Maybe if you had more of a sense of humor, you would get more joy out of life. Then you wouldn't need to go sleep with other women's husbands."
Pausing, Stella looked at her neighbor thoughtfully. "I know, that sounds hipocritical, considering my affair with Stan, but that began because Howard had already left me for you, emotionally, if not physically. So I suppose I should be thanking you."
"Anyway, my first date with Stan was a misunderstanding. I thought he was inviting me to dinner, when really he was inviting me to be dinner. He thought my thighs looked tasty." Stella chuckled at that. "I have been doing Richard Simmons, Dancing to the Oldies for five years now, they had better look tasty. Anyway, there I was, trussed up on his dining room table, waiting for him to take a slice out of me and instead, he looked into my eyes and fell in love. Ruined his dinner plans. But it worked out. He ended up luring a little boy over and he made a quick stew out of him. I was of course horrified at first, but I didn't want to be rude, so I took a bite. Imagine my surprise when I discovered it was delicious."
By now, Stella had diced Howard'a liver and spleen and was mixing them with the onions. Sprinkling in a bit of seasoning, she poured the mixture into Howard's mouth and sewed his lips and neck closed with some heavy twine. Stella then placed her husband's head into a pressure cooker and surrounded it with potatos and carrots. "Stan gave me the recipe. It's a favorite of his, from when he was a boy. His mother called it Cheaters Delight. She went through a lot of husbands."
There was a knock at the back door. "Oh, he's here!" Excited, Stella ran over and opened the door, falling into Stan's arms. They kissed a moment and then Stella moved aside so Stan could inspect her handywork. He entered the kitchen, carrying a bottle of wine and sniffing the air, breathing in the aroma that was coming from the stove."
"It smells divine." Then he turned his attention to Kim. "Has it been long enough?"
"I think so."
Stan removed the duct tape and Kim coughed, trying to clear her throat. Dozens of black bugs came crawling out of her mouth, leaving their secretions on her tongue. "You wouldn't know it from the smell," Stan said, "but the dung beetle's secretions are a great marinade."
The kitchen door burst open and Miranda came in, yelling, "Hungry child here. You have to feed me. Oh, Hi Stan." Then, spying Kim, "Ooh I call dibs on the eyes!"
Word Count 994
Posted by Lisa at 10:39 AM