Day 6 of the A to Z Blog Challenge is also my Vamplit FridayFlash. The theme this month is Superstition and the topic today is Broken Mirrors….and F for the A to Z Challenge.
F stands for Familiar Spirit (or Fail for attempting to contain one).
Forevermore
By Lisa McCourt Hollar 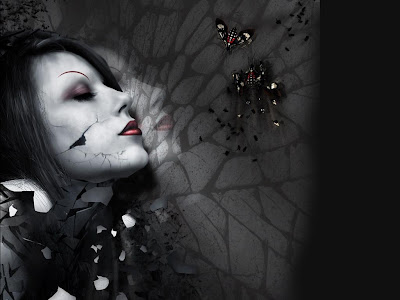 Selma lit the candles, bathing her bedroom in a warm glow. The candles sat in a circle around a full length mirror that she had placed in the middle of her room. She had found the mirror in the attic and after some considerable persuasion, had managed to convince her mother to let her have it. The mirror itself was framed in black, which is what had caught Selma’s attention. It wasn’t especially decorative, but there seemed to be a glow beneath the surface and Selma felt a familiar stirring in her mind. A voice seemed to whisper to her from within the glass and when she peered into the mirror, she saw a face returning that imitated her own, reflecting eyes that were older and more cunning than she possessed. She knew immediately that the mirror was magic, perhaps a portal to another world and knew that she must have it.
Selma had been studying witchcraft for a while with her friends. It had begun as a lark, a way to rebel against their parents. They had died their hair black, wore dark makeup, drawn in thick lines under their eyes and around their lips and wore clothes that they thought made them look rebellious. While none of her friends seemed to have an affinity for magic, Selma had a natural ability, one that she learned from a family member, she shared with her grandmother. She discovered that magic was woven into many ordinary looking things. The mirror, she suspected, contained a familiar spirit that had been bound to her grandmother. Tonight Selma planned to summon the Familiar and bind it to her.
Finishing her preparations, Selma turned and faced the mirror. The reflection was her own, but if she did this right, that would change.
“Spirit contained within the mirror, reveal yourself to me.”
The candles flickered, but nothing happened. The image in the mirror never wavered.
“I compel you to come forth, oh spirit I command thee, reveal thyself.”
Nothing, although this time Selma got the distinct feeling she was being watched and that the spirit was amused.
“Spirit, come forth.” This time, even though Selma’s voice had seemed less certain, there was a ripple in her reflection. The image that looked back at her was still Selma’s, but the eyes were darker and the smile mocking.
“You summoned me?”
Selma wasn’t sure what she had expected, she had grown up with movies like Snow White, where the mirror answered to the Queen, but actually having one speak to her, even though that is what she had been attempting, caught her by surprise. Stammering a moment, Selma searched for the words she intended to say, once she’d summoned the spirit.
“Spirit, I bind thee to me, I compel you to serve me, I command you to obey me and only me. I bind thee to me forevermore.”
“Forevermore you say.” The spirit’s voice was mocking, her voice trembling with rage. “Serve you…a mere child? And why should I do that…master?”
Uncertain at the strange turn the magic was taking, Selma took a step back. Her voice shaking, along with her knees, the young witch answered, “Because I am the Sorceress that has called thee. I have bound thee to me and you must obey.”
“I must obey? Do I? Your features look familiar to me. I think perhaps I have met a relative of yours.” The spirit smiled and nodded, “I know you now…you are descended from the witch that trapped me here.”
“Trapped you?”
“Imprisoned, captured, chained, shackled…bound, yes, bound me to this mirror, forcing me to live in shadow and smoke, doing her bidding. I had plans to escape, but then she died.”
“The witch was my grandmother and the mirror…and you, belong to me now.”
“So I heard, you said you bind me…”
“Yes, I did,” Selma said, wondering why she felt as though she were walking into a trap.
“To. You. Interesting choice of words.” The spirit smiled, flames showing in her eyes. “I accept…only…”
“Only?”
“Only it shall be you that serves me.”
The mirror began to glow, first appearing almost white and then the surface began to darken, becoming black, the reflection warping as the glass began to crack. Then the mirror shattered, shards of glass raining onto the floor like hail. Sharp fragments cut Selma’s hands, which she held out in front of her, protecting her face,
Remembering that a broken mirror brought seven years of bad luck, Selma acted quickly, turning counter clockwise three times. On the third turn, she found herself looking into eyes that were black as onyx.
“You bound me to thee…so mote it be.”
Selma opened her mouth to scream, but nothing came out. Instead, the Familiar poured herself into Selma, binding her spirit to the inexperienced witch. Selma fought back, but the entity was more powerful, her anger at her captivity driving her fury. When the battle was over, Selma picked a shard up from the ground and looked into it. The eyes reflecting back were cold and black. Cunning. Smiling, an unfamiliar chuckle left her throat. She was finally free.
Word Count: 857
Posted by Lisa at 12:58 AM