Had a hard time with todays A to Z Blog Challenge. Finally cheated and worked X in with my villains name. Live with it. Kirk cheated on the Kobayashi Maru and he became the Captain of the most famous Star Ship ever.

The Vamplit Friday Flash Theme is Old Wives Tales. I worked several into this. 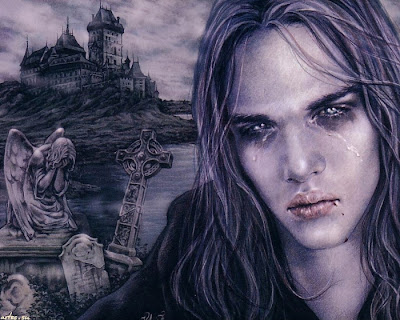 Groaning, Selma rose from her rocking chair, her knees protesting sharply. Careful to stop the chairs rocking motion, lest an evil spirit decides to sit in it, she headed to the front door to see who it was that had intruded on her evening.  Looking through the small peephole, she crossed herself. It was Xavier, Dominique’s son. Checking to make sure the salt lined the threshold and hadn’t been broken, she shuddered, and then opened the door, only a crack though, she didn’t want him to take it as an invitation to come in.
“What do you want with me, Xavier?”
“I heard that you had been ill and thought I would check on you.”
Selma pulled her shawl around her shoulders and fixed him with a stern glare. “I am fine Xavier. I may be an old woman, but I’m strong as an ox.”
“Never the less, I know you are alone. It would be a shame if something were to happen to you.”
“Thank you for your kindness. Now if you don’t mind…” Selma moved to shut the door but Xavier stuck his foot out, blocking her escape. Behind her, the old grandfather clock chimed. It hadn’t worked for years. Another chill crossed her old bones and she felt real fear.
“Xavier, I am an old woman and tired, but don’t test my patience.”
“I will be back to check on you tomorrow,” Xavier said. Then without a word, he turned and left.
***
Selma dreamed of her sister. She hadn’t thought of her in some time. She’d died during child birth when she was only twenty-three and Selma had thought she’d long since put her twins ghost to rest. Thelma was talking to her, trying to warn her of something, but Selma couldn’t understand a word of it. Her words were jumbled at times and at other times, her sister’s mouth would move, but nothing came out. Then Thelma turned away from her, bending to pick something up. Selma strained to see what it was, but Thelma blocked her view. Finally she turned back, a smile on her face. She was holding a baby. The baby, still covered with the blood from birth began to scream, but the sound that came out sounded more like a crow than a child.
***
Selma woke up with a start.  Something was rattling at her window. Horrified she saw a bird flapping against the glass, trying to get in. It thrashed outside for a few more seconds and then took off, screaming its outrage at being denied entrance.
Something bad was going to happen, Selma could feel it. It had to do with Xavier’s visit; there was no doubt of that. He was the seventh son of a seventh son. She knew many people believed that made him a vampire…or a werewolf, according to some. She didn’t hold to that belief, although she suspected he had some strong magic. She also suspected he danced with Satan’s mistress beneath the light of the full moon, although she had no proof of that.  Getting up to go to the bathroom, she pulled her rosary beads off the bedside table and took them with her. When she was finished, she opened the door to the hall and felt a cold chill hit her face. The window at the end of the hall was open and the crow sat on the ledge, pecking at something bloody. Then the old grandfather clock chimed again and she heard footsteps crossing the floor of her bedroom.
“Xavier,” she said, peering into her room, “how did you get into my home?” Her voice was strong and steady, she sounded outraged. Truth was she shook with fright. She would be dead soon and she knew it.
“I came for you, mother.”
“I am not your mother. Now leave. She held out her rosary, the silver cross flashing in the light.”
“Your superstitions can’t save you woman.”
His eyes were dark and pierced her heart with their coldness. He moved towards her and she wanted to run, but her legs had turned to stone.
"I am so hungry old lady and you haven't long left anyway."
Then he was upon her, his arms around her, caressing her hair.  Selma’s heart stopped moments before he bit into her neck. Xavier drank greedily, trying to get it all before it cooled. Spotting a glob of the red nectar splat to the ground, he swiped it up with his finger and licked it clean.  Five second rule.

Seventh Son of a Seventh Son: Believed to have magical ability. In some cultures he is a vampire. When writing this my daughter told me she’d heard werewolf.
Clock that doesn’t work chiming means a death in the family.
Salt on the threshold of a door will keep evil spirits from entering your home.
Don’t leave an empty rocking chair rocking, or an evil spirit may come and sit in it.
Dreaming of someone who has died is a warning.
Dreaming of a birth means there will be a death.
A bird in the house is a sign of death.
5 second rule…couldn’t resist.