Holding his breath, John watched from the shadows as the Shufflers passed. One drifted too close to where John was concealed, its vacant eyes searching the shadows, drool hanging from its lips; the creatures mouth turned up revealing decayed teeth.  The Shuffler, once as human as John, but now something entirely alien, stuck its tongue out, slipping the appendage in and out, as though tasting the air. Down the street, something crashed to the ground, drawing it away and John let out his breath, relieved. He waited a few moments, searching the buildings along the street to be sure there weren’t any others lurking around, before bolting into the light and around the corner. The stairs leading to the meeting were just ahead.
“We were about to start without you,” Freda said, looking up at John.
“I’m sorry.” Shrugging off his coat, John shut the door to the basement behind him. “I almost got caught by one of them.
Doreen shuddered, her face turning ash gray. Her husband had been among the first taken and she could still be heard crying some nights.
“Damn bastards,” Terrance said. 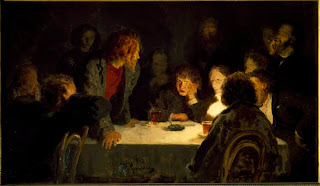 “Agreed,” murmured John, taking the seat next to Freda. She searched his face, her eyes concerned. “I’m fine,” he assured her. Taking her hand he gave her a reassuring squeeze.
She smiled, satisfied he was okay. “I wish they would just go away.”
“We all do; maybe one day we will have driven them out, but for now, the fight remains.”  Stan, the oldest of the group and the only one to remember a time when they didn’t have to worry about the Shufflers looked around. At twenty-seven, his hair was already beginning to gray, a sign of the stress he had endured.
“We should begin,” Doreen said. The others echoed their agreement.
“Okay.” Clearing her throat, Freda let go of John’s hand and reached for the book in front of her. John pulled his book from his backpack while everyone began opening their own texts. “John, will you read?”
"It was curious to think that the sky was the same for everybody, in Eurasia or Eastasia as well as here. And the people under the sky were also very much the same--everywhere, all over the world, hundreds or thousands of millions of people just like this, people ignorant of one another's existence, held apart by walls of hatred and lies, and yet almost exactly the same--people who had never learned to think but were storing up in their hearts and bellies and muscles the power that would one day overturn the world."
John’s voice cracked as he read the last part, tears filling his eyes, how deeply the words affected him. They reflected his life now. Just a babe when The New World Order took over, he had lived his life in secrecy, learning from books forbidden to be read. His life, as well as the others, was filled with shadows and fear; fear that one of the mindless zombies, created from conformity to the N.W.O, would stumble into their world. Doreen had lived her fear, barely escaping as her husband was devoured, his mind reshaped into a form best suited the New Government. John remembered holding her, the sky lit from the burning of books; books she and her husband George had cherished.
“They can’t take the words from me,” Doreen had whispered through tear filled eyes. “They can’t take away the memories.”
“But they both knew they could.  And so now they group huddled in near dark, the room lit only by candles, reading… taking in all they could.
“One day,” Freda said, echoing the hopes of all in the room, “we will be able to read in the open. Knowledge will not always be banned.”
Quote taken from George Orwell, 1984, Book 1, Chapter 9
Books must never be banned. Freedom must never be diverted.