The amazingly talented Lori Fetters Lopes is hosting a contest. This is my entry based on the photo prompt. Check it out and the other stories... write one of your own. Seriously, you should try it. 175 words of good time. 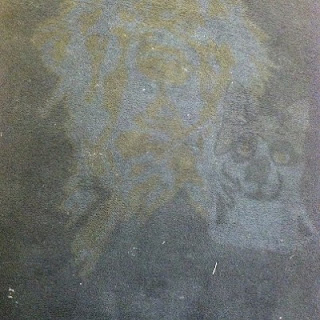 Sarah woke from the nightmare, her scream dying as the afterimage of the dream faded. This was the third night in a row she’d woken covered in sweat, terrified of… what?  Aaron?  He was gone. Still, something was coming.
Padding to the bathroom she dropped her robe. Turning on the shower, she inspected her body in the mirror while the water heated up. The scars were fading, but the evidence of what Aaron had done to her was still there. At least she was safe now. She’d managed to kill him and that damn hell hound of his, barely escaping the cult with her life. Others had escaped too, but it was Sarah he had wanted, trying to take her with him.
As the steam surrounded her, she shivered remembering the fire.
“Hell can’t keep me from you,” he had promised as the flames consumed him.
Horrified, Sarah watched as a heavily bearded man and his dog appeared against the steamed glass. Screaming, she heard the growl of a dog right before the glass shattered.