This is a fanfic piece, written based off of Star Trek DS9. For those not familiar, Trills are a species that join with another in a symbiotic relationship. The symbiont lives thousands of years and is joined with a new trill upon the death of its current host. The memories and experiences of that host are passed on to the next and so on. Dax was the Trill symbiont in DS9, being joined with Jadzia and then Ezri. (You will notice that those two names make up my Muse’s name, Jezri.) Before Jadzia there was, Lela, Tobin, Emony, Audrid, Torias, Joran and Curzon. Joran was a host whose memory was suppressed because of some horrific things he did. Joran was mentally unbalanced and never should have been chosen as a host, but his illness was not discovered until after he had murdered several trills. He was killed and the Dax symbiont given to Curzon. The memory of Joran was hidden until it resurfaced in Equilibrium. It is this that I explore in the following story, introducing a character that may have been one of Joran’s friends and perhaps even more unbalanced. I am using the art of Sue Mydliak for the Friday Frights theme. Next week I will be using art from Thomas Arensburg. 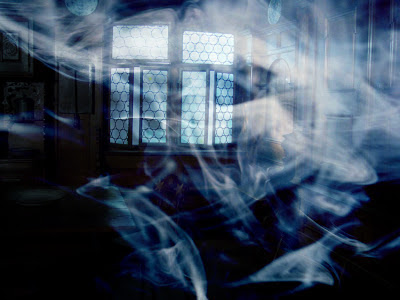