#MondayMixer The Caged Bird Does Not Sing

I have used all 9, an attempt to get the overachiever award and show my husband up. Yes... we have that kind of relationship. But he loves me anyway. (And I him.)
The Caged Bird Does Not Sing
By Lisa McCourt Hollar 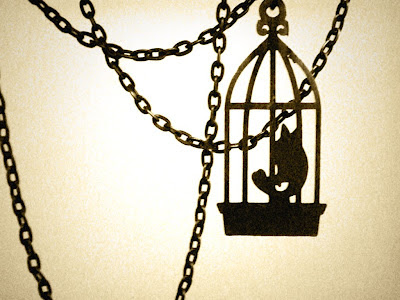 Clark held his badge over the sensor, his usual phlegmatic demeanor replaced by an impatience that threatened to break the door, if it didn’t open. Hearing the beep, he dropped his lanyard against his chest and stepped onto the elevator. He always felt as though he were descending into an oubliette.
The elevator music, something from a cabaret, served to worsen his mood. The discordant tones were more grating than a flock of shrike, all chirping at once. When the doors opened he rushed out and into the amphitheater that was his work area.
She was in the corner, his Drachma, his love. Somehow she’d broken her restraints.  Her ears were covered to drown out the shrieking of the alarms and she stared at him with hatred. Clark reached for his whip. Her beauty was commensurate with that of a Queen, why wouldn’t she let him worship her as such?