The Dream and The Dreamer

Ok, it is time for my inner geek to come out. Today is the 20th Anniversary of Deep Space Nine. I am forever a Trekkie. I love all things that have to do with Star Trek... except for that last abomination of a movie. That being said, DS9 is my favorite out of all the series. There was something about the crew of the space station that struck a familiar chord with me. Every week I would tune in and laugh, cry, celebrate in their triumphs and dispair at their losses.
One of my favorite story lines was the alternative reality of Benny Russel. Benny was a sci fi author, living in the 1950's. It was a time when the thought of a black man ever being the captain of a space station was... inconceivable. Yet Benny conceived it and submitted the story to his magazine. They liked it... as long as he made the captain white. Benny refused. Not only that, but he began having visions of Captain Sisco and came to believe that there was a reality where Captain Sisko and his crew existed.
He was beaten by some cops... who strangely resembled Dukat and Weyoun. Eventually he was institutionalized. Dr. Wycoff tried to convince him that his dreams were a delusion but Benny refused to believe him, eventually realizing that he was in fact Captain Sisko and that it was the Pah Wraith that were altering his reality.
The Dream and The Dreamer
by Lisa McCourt Hollar 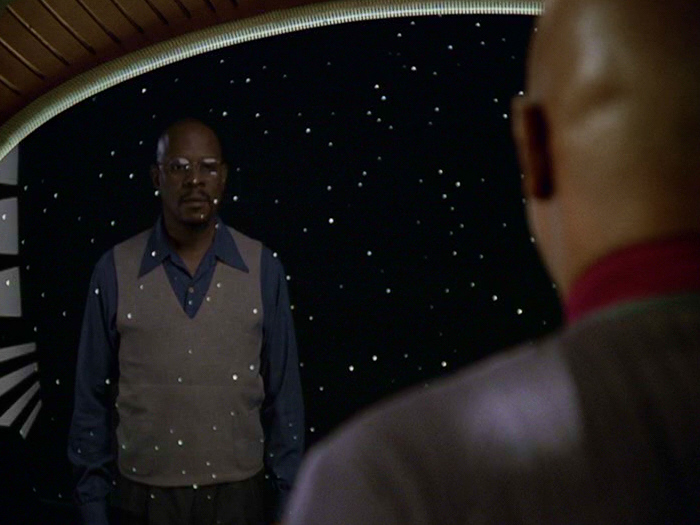 Stepping into the sterile room, Dr. Wycoff stood still for a moment and studied his patient. The man was furiously scribbling on the wall. Nearly every square space had been taken up, but still he continued, creating a world only he saw. The doctor cleared his throat and then spoke. "Good morning Benny."

Benny barely glanced up from his work, acknowledging him with a simple, "Doctor."

His baritone voice made the doctor smile. It reminded him of his father, although the dark skinned man was nothing like the man that had raised him. Placing his clipboard under his arm, he asked, "How's the writing coming along?"

Benny didn’t answer. Instead he studied his latest scribbles, a frown on his face.

"I see you've been at it all night again. Your pencil is worn down to almost nothing."

Benny’s voice held a mixture of sorrow and anger when he spoke. "She's dead."

"Dax. Dukat killed her."
Dr. Wycoff sighed. He kept hoping they would get past Benny’s delusions. This was a new turn though. Dax, though a figment of Benny’s imagination, had been a significant part of the delusion. She was both his mentor and friend… at least in the world he’d invented. Deciding to explore this turn of events, possibly a breakthrough in Benny’s treatment, he said, "I thought he was in a Federation institution."

"They released him… he was being transported to a prison and he escaped."

"And he killed Dax?"

"Yes, well with the help of the Pah Wraiths."

"Hmmm, interesting. I thought the Prophets were supposed to be good." This was one of Benny’s delusions, that the Prophets were watching over a particular set of people and that Benny had been chosen to be their Emissary. What’s more, he believed he was a Captain of a space station that stood guard over the home of these prophets.

"Most of them are good,” Benny said. “Not the Pah Wraiths."

"Interesting. Do you want to talk about Dax? What do you call her, Old man? Unusual name for a woman."

"Jadzia was an unusual woman."

"Perhaps this killing represents a breakthrough in your treatment. Perhaps you're ready to talk about reality."

"Because you wrote it?"

"Because I saw it. I saw the future. It is coming. It is real!" Benny was beginning to become agitated. Sr. Wycoff held up his hands, trying to soothe him. Benny always became upset when he tried to tear down the walls he’d built.

"Benny, calm down or we'll have to sedate you again."

"This isn't the future Benny. This is the present. The 1950's. You're Benny Rustle, not some future captain on a space station."

"Benny, what are you doing? Put it down. Put down the pencil." Dr. Wycoff pressed a button, summoning assistance."

The door opened and several large orderlies came into the room, surrounding the patient. Benny struggled, managing to punch one of the men in the jaw before being gripped on both sides. One of the orderlies pulled a needle from his pocket.
"Keep your Cardassian men away from me,” Benny yelled, fighting to get free of their grip. His eyes widened when he looked at Dr. Wycoff. “I know who you are. You're not a doctor! You are Dumar! Dukat put you up to this.  I see it now!”
“You need to rest a bit, Benny. I will be back to check on you tomorrow.”
“You're nothing but his puppet, you know.  Dumar! You are nothing but Dukat’s puppet!" The sedative was beginning to take effect and Benny sagged against one of the orderlies. Dragging him to his cot, they eased him down onto the mattress.

"Well, he should sleep now,” the doctor said. “ Maybe he'll be more compliant when he wakes up."

"How long do you think we can keep this up sir?” One orderly asked. “He recognized you, even under the human implants."

"Until we convince him it's only a dream."
The two of them looked at Benny while he slept. His eyes moved beneath the lids as he dreamed. “What do you think is going on in his mind?”
*** 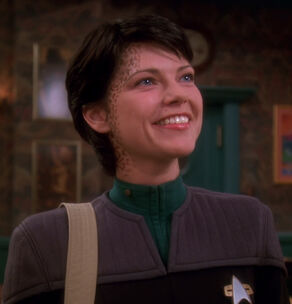 Captain Sisko stared at the young woman standing before him. There was something familiar about her.

Happy Birthday DS9! You are a wonderful dream.