The Cell
by Lisa McCourt Hollar 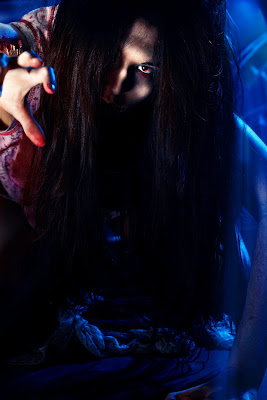 “Please help me.”
William opened his eyes. The words hung in the air, rustling against his ear. He rolled over, pretending he hadn’t heard. Moonlight filtered in from the window, silhouetting the other bed in the room and the small figure that lay on the dirty mattress.
“Please.”
William closed his eyes. His being here was a mistake. In the morning his father would come. He wouldn’t be left to rot, as the other prisoners were. His cell mate didn’t call out again. William fell asleep, his dreams filled with blood and the screams of his family. Water being thrown on him woke him and he sat up, startled. Across from him the other prisoner watched.
“They won’t let you go."
“They will,” William said. “My father has money. He won’t let them keep me locked away like a common criminal.”
She chuckled. “Your family is dead.”
“What do you know about them?”
“I know if they brought you here, there will be no one looking for you.” She smiled wider. “They only bring those that won’t be missed.”
William looked away, trying to avoid her eyes. “It’s a misunderstanding.”
“If you help me, I can get us both out of here. If you don’t… you will die and I will still be here.”
William looked back at the woman. He could barely make out her face. She was pressed against the wall, as though she were afraid of the sun’s rays. Her hair was dark and stringy. It hadn’t been washed in days and from the stench that reached him, neither had her body. If he’d passed her on the street, most likely begging for money, he would have ignored her. There was only one thing a woman like her was good for and men like William did not partake of their wares.
The sound of keys jangling outside the door announced the arrival of another guard. This one carried a tray of food. He set it down in front of William and then turned towards the woman.
“Tiberius is wondering if you are ready to join him.”
“I would sooner rot in hell,” she answered.

“Suit yourself. Eventually your hunger will drive you to do as he bids.”
The guard left and William studied the food. It consisted of moldy bread, a thin broth and a block of cheese. He hesitated, but his stomach rumbled and he knew he would need his strength. He choked down a few bites, trying to ignore the woman, who was watching him intently. After a moment he looked up. He wondered how long it had been since she’d eaten. It was clear she was starving. She watched him, her eyes hungry… almost savage.
“Would you like a bite?” He held out some of the cheese.
She swallowed. “You have no idea.”
“Tiberius,” William said. “I know that name.”
“The Master of Crane Hill.”
William was quiet. He knew what the town whispered about the founder of their town. There were some that believed the man dead, others that said he still lived, a macabre ghoul that never left the manor that towered over them.
“He feasts on the living,” his mother had whispered to him when she put him to bed at night. He had only been a boy then. His friends all heard the same stories, tales designed to keep the children in at night. Vampires that drank the blood of anyone that ventured too far from home once the sun had gone down.
“So he does still live,” William said, bemused. “That would make him, what? At least a hundred years old?”
“Older”
“And what does he want with you?”
“My soul.” She smiled and William gasped. For just a moment he thought he saw canines pushing beyond her mouth.
The day passed and he avoided more conversation. The guard brought food again, just before nightfall. He enquired if she would be joining Tiberius. Again, she refused.
“What is your name?” William asked after the guard left.
“Judith.”
He looked, startled. Judith had been the name of Tiberius’s wife. Yet this woman was only in her twenties. It couldn’t be.
“Oh yes, I am she.”
William pushed his tray away, his hunger waning. Crossing himself, he lay down in his bed, his back to the woman.
It was sometime later he heard her again. She’d moved to the center of the room, as far as her chains would allow her.
“Help me.”
William tried to ignore her but something in her voice demanded he answer.
“Help me. I won’t die… and I can’t do as he asks.”
“What do you want me to do?”
“I need sustenance. Not the food that nourishes you… something else.”
His mother’s words from so long ago came back. “You are a vampire?” He asked.
“Not by choice. I don’t want to kill. My husband though… he lives for it. The terror, the death… he loves it.”
“But if I let you… I will die.”
“No. I will stop. I will only take what I need. I will get the rest from the guards in the morning, when I am stronger.”
William had never felt such ecstasy before. When she climbed off of him, he was weak, unable to move. The sun was just beginning to filter through the window. Somehow she had broken her chains. Her beauty had returned. Judith took his blanket and covered the window, so that the cell remained dark. Then she lay next to him and waited for the door to open.
It was blood splashing on his face that woke him. The liquid trickled into his mouth, quenching a hunger that had been growing. Slowly he became aware. The guard lay gutted on the floor. Judith stood next to him, her hand held out.
“I promised to spare your life. I have done that and more. There are tunnels that will lead us out beneath the city. Come and I will show you the wonders of your new existence.”
Word Count: 1,000
Posted by Lisa at 1:08 AM