“How old is he?”
John looked down at the baby in his arms and then back at the woman. “Six months.”
“Awww, he’s a cutie.” She reached out and let the baby wrap his fingers around hers. She looked up at John through long lashes and grinned, shyly. “So, where’s his mama?”
“She got called into work, so I got stuck bringing him to the doctors.”
“Oh wow, if only more fathers would take an active role. My Susie’s dad disappeared the day I told him I was pregnant.”
Hearing her name the girl waddled over to take a look at the baby. “Baby,” she said, drool dribbling from the corner of her mouth. John tried not to grimace.
Brian looked back at her and gurgled. She giggled and he giggled. Then Brian did something he’d never done before. He said his first word.
“Die.”
“He said daddy!” John turned the baby to him and grinned. “Daddy. Say daddy.”
Brian just looked at him and drooled. Great imitation of the kid, John thought, but not what I want. “Come on, Brian. Da da. Da da.”
Brian giggled. John sighed and put him in his carrier. He looked at the woman. “You heard him, right?”
She nodded. “Don’t worry, he’ll say it again.”
Susie was down on her knees, staring at Brian. She had her face pressed up against his. Brian reached out a tiny hand and pushed against the girl. The message was clear, Back Off. Then he said it again. “Die.” And again. “Die. Die. Die.” John was ecstatic.
“Funny,” the woman said. “It almost sounds like he’s saying die.”
“Well of course it sounds like that,” John said, “but it’s daddy, trust me.”
“Mommy, help!”
Susie’s head was bent to the side. Brian had her hair and was pulling on it. “Die, die, die, die.”
“Okay, Brian, that’s enough.” John pried his son’s fingers open, releasing the girl’s hair. Susie ran to her mother, sobbing.
“I know,” John whispered to the baby, “she’s annoying, but one of these days you’ll appreciate girls.”
He turned to apologize to Susie’s mother and froze. The woman had begun a conversation with a harried looking mother. This woman had twins from hell. But it wasn’t her boys tearing apart several of the in-office magazines, or the marbles that they’d left scattered across the floor that alarmed him, it was little Susie, whose face was turning blue, while her mother attention was elsewhere.
“Hey, one of my marbles is missing!”
The one twin was counting his marbles and looking around accusingly. The woman looked down at her daughter at that moment and screamed. “SUSIE!”
John’s paralysis broke then. He took Susie from her mother’s arm and bent her over, striking her on the back three times. God, was he ever glad his wife had made him take that course. Yelling over his shoulder, he instructed the nurse to get the doctor. Making a fist with one hand, he placed it just above Susie’s belly button, and then used his other hand to cover it and thrust in and up. Everyone watched in silence, while Susie’s mother cried. The doctor came running into the waiting room then.
“Here, let me try,” she said, but just then a marble shot out of Suzie’s mouth. She was limp and John lay her on the ground. The doctor took over then, using CPR to try and get the girl to breathe.  Everyone waited, praying to hear her begin to cough, cry… do anything that would indicate she would be alright. Outside, sirens sounded as an ambulance pulled up.
***
“It sounds like you had an absolutely horrible day.” Rachel was changing Brian’s diaper, while John recounted the details of the day.
“We all thought she’d make it. The pain that girl’s mother is going through right now… I can’t even imagine.”
“It must be terrible.” Finished with the diaper, Rachel hugged Brian to her. She shuddered, trying not to think about anything terrible happening to her son.
“The woman was a wreck,” John said. “She lashed out at me, even though I had done all I could.”
“She was probably just hurting. What did she say?”
“That it was Brian’s fault her daughter was dead.”
Rachel’s mouth dropped open. She sputtered for a second and then exploded. “How does she figure that?”
John shrugged. “Brian was babbling. He said his first word… daddy.”
“He did! Daddy? Are you sure it wasn’t mommy?”
John chuckled, “I’m sorry dear, but you lose the bet. Anyway, he kept saying it over and over again, die, die, die, die…”
“Wait a minute… die?”
“Yeah. Well you know how babies are, they can’t pronounce anything right. Remember how your sister’s son pronounced castle? It came out ass hole.”
Rachel laughed. “Mellissa was horrified. She was at the store one day and he saw a Legos Castle he wanted. He was screaming ass hole all the way through the store.”
“Yeah, so anyway, this little girl got down into his face… you know how he likes his space, and he grabbed her hair. She’s screaming for help and he starts going, die, die, die, die, while he pulled her hair…”
“Oh, God…”
“She says he’s demon possessed.”
Rachel put Brian down on a blanket and shook her head. “She lost her daughter, she’s not rational. She’ll get over it.”
“Yeah, maybe.”
Brian crawled off the blanket and headed for Fluffy. The cat let out a frightened meow as the baby approached. She tried to run, but Brian dove on the cat, getting drool all over her fur.
“Poor Fluffy,” Rachel laughed. “Come on, Brian.”
“She bent to pick him up and then stopped. She could hear the baby gurgling into Fluffy’s fur, die, die, die, die…”
“That’s just creepy,” she said, picking him up. “Mommy’s going to have to teach you pronunciation. Ma ma. Ma ma!”
After Rachel walked out of the room, Fluffy felt a hair ball lodge in her throat. 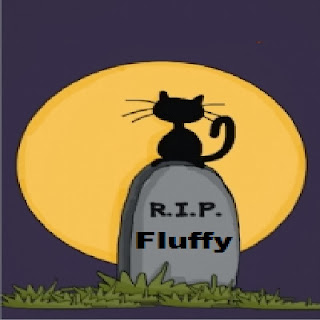