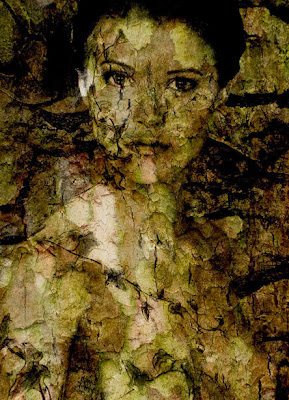 Father Donovan finished drawing the chalk outline of the pentagram. He stood, stretching his limbs, working the kinks out. His limbs ached with the years of neglect. He’d grown complacent, forgotten the vow he’d taken to fight evil. That was when he was a young boy. He had ideals, morals that had been replaced with lust and a hunger for power. Because of his sins, he would die this night. He was ready. Behind him, the organ music he’d programed to play came to an end. As the music fades away, he searches for her with his mind he knew she wasn’t far.

Her footsteps sounded behind him. Steeling himself, he turned, ready, he hoped, for whatever tricks she would try to use. The succubus smiled at him when he looked her way. His skin crawled as she stood, slithering towards him, her tongue flicking out, snakelike. God help him, his cock was hard. He wanted her. He held the cross up, forcing her to stop.

“But you still want me.” She dropped the lace dress she was wearing, and stood before him, naked. Her nipples stood out, pointed like the horns he knew should be on top of her head. He’d seen them once, when she’d allowed him to see her true form. She was trying to frighten him then. The priest was sure she would reveal herself again before the night was over… when seducing him didn’t work.

“Put the cross down, Harry. Come touch me. Let me touch you.” She got down on her hands and knees, showing her willingness to be submissive to his commands.

His mind clouded and he rubbed his hand against his cock, feeling it harden. Then his eyes fell on the Virgin Mother and her Son and his soul, what was left of it, burned with shame. He dropped his hand. “I would rather handle a viper. It would be less dangerous.”

“I can be anything you want.” Her tongue flicked out again, forklike. She was across the room and he still felt something slide around his cock, squeezing it. He gasped, fighting the arousal that rippled through his body. She’d been with him a long time, she knew how to distract him.

Finding his will, he held the cross up. “Get the behind me, Satan.” She stopped, but her eyes flashed red. The horns she’d hid now stood out. She hissed, her voice cold and deadly.

“You speak of Satan, Priest, you want God to protect you and yet here you are, drawing a pentagram on Holy ground. Did you not fuck me on the sacrament just last week? Where was your resolve then?”

Father Donovan didn’t answer. He lit the candles, knowing that what he did was a sin, but it was the only thing he could think of to right the wrong he’d committed. He’d forsaken his vow and allowed evil into the church. He’d worshiped a false god and now the one true God had turned His back on him.

She lit a cigarette and blew the smoke into the air. “Harry, what happened? Why have you turned on me? I promised to take care of you and I have. Stick with me and in a few years you’ll be at the Vatican.”

“You know…” His voice choked off, the tears of the boy he’d raped coming back to him. He’d kept asking over and over again, “Why.” Father Donovan couldn’t answer. He didn’t know. When he was done, and the boy lay crying in his bed, he’d ran to the bathroom, emptying his stomach into the toilet. Then he’d looked up into the mirror and saw the monster he’d become… he’d been ashamed. He returned to his bed and strangled the boy then. He wanted to remove the evidence of what he’d become. It was Halloween night… it would be assumed he’d been out trick or treating. No one knew he’d been there.

It was a convenient lie. Eventually they boy’s body would be found. They’d know what he had done. And if they didn’t, God knew what he’d done.

Her voice, soft and soothing, seduced him. “Harry, why do you judge yourself so harshly? That boy had never had anyone love him before. His father was never there, his mother a drunk. You sent him to a better place.”

For a moment her words swayed him. It was true, he’d seen the bruises on the boy’s back. The burns put there by cigarettes, the lashes from a belt… the boy had never known love. Which is why Harry knew he was doubly damned. The child came to him, begging him for help and he’d abused him even more. He exploded, turning on the temptress.

“You are Satan’s whore! You have led me astray and I followed willingly. I know what I have become… I don’t deserve to live. I only wish that before I die, I could rid this world of your presence. I will at least rid it of mine.”

“Then let’s begin.” She stepped into the middle of the pentagram. The cigarette smoke followed her, becoming an entity of its own. She held out her hand for him to join her. Behind him, the door opened. He turned to see who had come. He’d locked the doors, no one should be there. The boy he’d defiled stood there, a smile on his face. Behind him stood countless other children, the ones he’d used and discarded over the years. Their tears still fell, wanting to know why he had betrayed them. Daniel, the one he’d killed the day before, stepped forward, his hand held out. He was offering his forgiveness. All he had to do was accept…

“I don’t deserve it,” he said. And then, praying for the strength he would need, Harry stepped into hell.