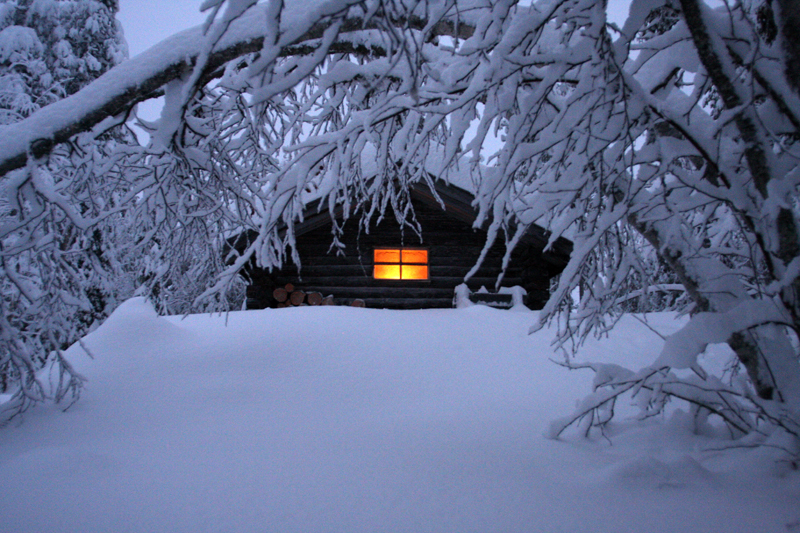 It was cold outside. Karen stumbled through the snow, keeping her eyes on the light in the distance. The soft glow was the only thing that kept her going. She had stopped feeling her feet hours ago. Behind her she heard a wolf howling. The beast sounded like he was nearly on top of her. She took a moment to look, but there was nothing in sight, except for the vast expanse of snow behind her and the blood soaked trail she had forged through it. The wolf howled again, this time definitely closer. Karen turned back towards the cabin, her heart beating furiously in her chest.

“Hear what?” Daniel put down the paper he was reading and looked at his wife. She was standing next to the window and looking out at the snow.

Corinne sighed. “I thought I heard someone yelling for help… but I guess it was just my imagination.”

Dan chuckled. “Woman, you could hear a pin drop from a mile away, so if you heard something, I’m sure you did, it’s my hearing that needs to be questioned.” He stood up and joined his wife at the window. “My eyesight however is much better than yours.”

“Maybe,” Corinne agreed, “but who would be out in the snow? Aint been a car down the side road all winter. No one in their right mind attempts the pass.” She stopped and put her hand to her hear… “but there it is again… a woman’s voice. Very faint. And something else… a wolf.”

“There!” Dan pointed towards the horizon. Corinne didn’t see anything right away but then she saw movement, just barely visible to her diminished eyes.

“I think it’s a person.” Dan moved towards the door and reached for his coat hanging on a peg.

“You’re not going out in this.” Corrine grabbed Dan’s arm and tried to pull him back. “I definitely heard a wolf and it sounds hungry.”

“Which is why I need to go. I don’t know what any human is doing out there, but whoever it is will die before they reach us. I’ll use the snow bike. It will get me there and back quickly.”
He was right. Corrine bit her lip and then said, “Please be careful.”

***
Karen’s knees finally gave. She sank down into the snow and fell forward, burying her face in the cold blanket. Somewhere she heard the sound of a motor, then the crunch of snow.

Karen looked up into the face of an old man.

“A mon… a monster…” Karen lifted her finger and pointed over the man’s shoulder.

He bent to pick her up, but Karen tried to pull away. He didn’t understand. Her words came in short gasps.

The creature that had stalked her the last few hours, had in fact toyed with her every step of the way, reared up behind the man and slashed its great claws across the back of his head. Karen screamed and then everything went dark.

“Where am I?” Karen looked around the small room. There was a fire burning in the idle of a small hearth with a pot hanging over it. The woman moved from Karen’s side and scooped something out… a rag.

“My Corrine, she’ll get you back on your feet in no time.”

Karen turned her head towards the voice and was surprised to see the old man sitting in a chair.

“What… what happened. Last thing I saw was the creature… how did you survive?”

“I know it sounds crazy,” Karen said, “but I’ve been running from it for hours.”

“More than likely delirious from the cold.” Corrine shook her head and clucked her tongue as she examined the woman’s feet. Then she began wrapping them with the cloth she’d pulled from the pot. “Their frostbit. I don’t know… you might lose a toe or two.”

“Is there a hospital nearby?”

“A hospital, no, but I have a medical degree.”

“She was a nurse during the war.” Daniel said.

“Be easier to name which ones I wasn’t in… let’s see, most recent was Vietnam. Before that, the Korean War, World War two and one, the Civil War…” she chuckled then, “though I don’t recall it being very civil.. The American Revolution, but I was with the British at that time…”

“Wait a minute,” Karen said, “that’s not possible. You’d have to be hundreds of years old.”

“Thousands actually.” Corrine finished wrapping her feet and smiled proudly at her handiwork.

“That’s not possible,” Karen said again. She studied the woman, trying to decide if she was pulling her leg or if she was a mental case.”

“You’re the one that spent the day running from a werewolf,” Daniel said, “and you’re going to tell us what’s possible and what isn’t?”

Karen closed her eyes. Fear ran through her body and she shivered, remembering the chase that began miles from here. The man that had picked her up at the bar, how he’d tried to rape her and then running… but he’d come after her and then… She shook her head, realizing her memory must be wrong. He’d slipped something in her drink, that must be the answer. “Like you said, I must have been delirious.”

“Of course you were,” Daniel said. The old man grinned and there was something in his eye that alarmed Karen. Then she saw the scratch on the side of his face. Four deep scratches, like those from an animal. The beast, if her memory was correct, had attacked him.

“I… I want to go home.” Karen started to sit up, but found she couldn’t lift herself very far. The blanket that had been covering her shoulders fell down and she saw for the first time that her arms were tied to the side of the bed. “What’s going on? Untie me!”

“I’m sorry, we can’t do that,” Corrine said. “It’s been a long winter. A lot of people come this way in the summer. Campers that like to rough it in the wild. Usually more than enough to go around for werewolves and vampires. No one notices much if someone comes up missing… there’s a cliff west of here and it’s thought that some of them may have fallen. You know, tourists, they never listen when told to stay away from someplace.”

“But here you are,” Daniel said, “unfortunate for you, but we’re hungry and we don’t care much for werewolf meat.”
Posted by Lisa at 8:59 PM