Stefan watched the boy as he approached the yellow house. Decorated in gaudy ornaments, the porch light brightly lit the door, displaying a witch in garish orange and green colors. Stefan hid behind a tree, just out of the reach of the encroaching glow.
The boy, plump for someone so small, struggled to keep up with the rest of the children, his short, stubby legs sticking out beneath the sheet serving as his costume.

The Vampire Bureau is one of 14 stories included in Jezri's Halloween Nightmares. 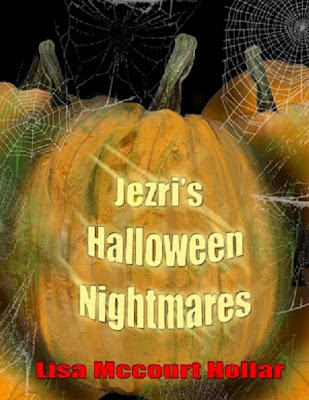 A collection of 14 stories, perfect for the Holiday, along with bonus material. Collection includes, The Bainbridge Witch, The Vampire Bureau, Ol’ Jack, Witch’s Brew, The Dress’s Curse, Retribution, Trapped, The Dragon’s Claw, Hide and Seek, A Prank Gone Too Far, Temptations, Dare, Ageless and Reverie, A Graystone Manor Short.

Bonus Material gives you free sample reads of Progeny, The Second Wave: A Post-Apocalyptic Tale, Blood Lust and Undead Ahead, a collaboration of stories by Lisa McCourt Hollar and Jeffrey Hollar.
Show More
Show Less
Available on Amazon, BN and Smashwords.
Posted by Lisa at 11:24 AM