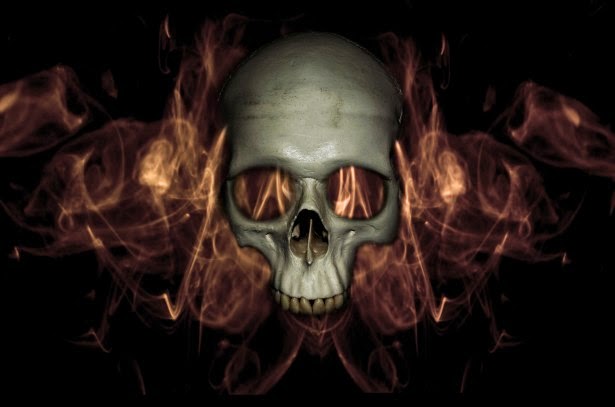 The music blasted through the walls. Shelly hit her head on the kitchen cabinet and in the next room the baby began to cry. She had only just gotten her to sleep. Her fingers gripped the plate she’d been washing so tightly, it broke in two. Blood dripped in the water.

Sheila wrapped her hand in a dish towel and went to hush Julia. “Shhh, hush baby.” She picked the infant up and patted the child’s butt. She didn’t know the science of it, but for some reason the rhythm and soft tapping calmed Julia. The baby’s sobs ceased and she looked around the room, eyes red and confused as the loud, metal music invaded the nursery.

Shelly picked up the phone and dialed a number. It was one she knew by heart and she’d only lived in the apartment for a week.

“Mr. Mackey,” she said when the phone was answered, “he’s doing it again … What do you mean, what do I expect you to do? You’re the superintendent, make him stop … I know he pays rent, so do I …” Frustrated, Shelly walked over to the wall and pounded on the thin partition. “Maybe if you had to listen to it day and night, you’d care,” she yelled into the phone.  Suddenly the music stopped. Shelly let out a sigh of relief. “I’m warning you, Mr. Mackey, if you don’t do something about him, I will.” Shelly hung up the phone. The music started again.

An hour later, Julia in one arm and a plate of cookies in hand, Shelly knocked on her neighbor’s door. Across the hall a door cracked open. Mrs. Willis peeked out. Julia smiled at her, but the old woman shut the door. Nosy old biddy. Julia chewed on a hand and tried to reach for a cookie. “No, no, sweetie, these aren’t for you.” Shelly pounded again and almost fell into the man on the other side, when the door opened abruptly.

Shelly smiled. No reason to be unpleasant … even if he was being so.  “Miss … I’m not married. Or you can call me Shelly.” She held out the plate of cookies. He just stared at it and waited for her to speak. She cleared her throat. “Tom, we talked yesterday … perhaps you just forgot. It’s your music. You woke Julia. I thought we had an agreement. No loud music, especially at 3 o’clock. That’s when Julia takes her nap.”

“Yes, well Julia woke me at 2 am. Then again at 5 am. Her shrieks at 8 am ruined my breakfast and I have all but given up on the idea that I can bring my date home tomorrow night.”

“Not my problem.” Tom started to shut the door, but Shelly pushed her hand against it.

“Go ahead. Noise ordinance laws don’t go into effect until after 10 pm.” He started to shut the door, then opened it, and looking thoughtful said, “Maybe I should call them when your brat starts to shriek.” He then took the plate of cookies out of Shelly’s hand and shut the door, nearly clipping the foot she was about to insert in the opening.

Tom walked slowly across the room. His eyes met Lydia’s. Hers were wild—scared and hopeless—her cheeks tear stained. He pressed the button on his stereo and the music came to life. Tom pulled the rag out of Lydia’s mouth so she could scream with the music. He no longer found her shrieks exciting. Somehow Shelly had robbed him of the joy. He slit her throat, ending it. Then he picked up the cookie and took a tentative bite. Chocolate chip and almonds. Interesting combination. And not bad. He wondered if he should bake her something. He traced his knife along Lydia’s belly. Perhaps a nice kidney pie. Without warning, Lydia’s belly convulsed and bulged, then went still. The life that had been inside was dying—may even be dead. Next door he heard the baby crying. He took another bite of the cookie and contemplated what music he should play for their screams.

Shelly lay Julia in her crib. She’d slept peacefully all week. There hadn’t been any loud music all week. There was a bit of unpleasantness the other day when Tom’s date … apparently he had stood her up … showed up pounding on his door and shouting obscenities. He wisely didn’t open the door. The woman went away and Tom remained silent. Life was good. Until now. There was some noise outside. Shelly opened her front door. The police were outside Tom’s door, with the super. The old woman from across the hall was there too.

“I haven’t heard anything out of him all week,” she was saying, “and now there’s a bad odor coming from inside.

The two officers exchanged looks, then when the door wasn’t answered, asked Mr. Mackey to open the door.

“I don’t know … don’t you need a warrant for that?” he asked. “This guy likes his privacy.”

“Just open it,” one of the officers said.

The superintendent shrugged, pulled out his keys, and opened the door.

“Jesus, Mary, and Joseph.” The cop said, making the sign of the cross. The second officer pulled his gun and entered the apartment. Mr. Mackey looked inside and grew pale. The old woman threw up.
“Is everything okay?” Shelly asked. She stepped into the hall. Mr. Mackey tried to hold her back, but she pushed past him and glanced into Tom’s apartment. She nearly fainted.  The body of a woman, her insides eviscerated, lay on his kitchen table.

The police questioned everyone in the building. Besides the woman on the table, inside his refrigerator were various organs and body parts. A regular Jeffrey Dahmer, this guy, though in this case he seemed to prefer women. And babies.

Tom had been found on the kitchen floor, dead. There was no sign of a struggle. An empty plate with traces of chocolate was on the counter.

“Do you know if he had any visitors recently? Anyone that might have seemed suspicious?”

“Suspicious?” Shelly asked. “I didn’t even know I was living next to a serial killer.” She hugged Julia tightly to her and shuddered at the thought that she’d even lived next to him for a week. “He had a lot of girlfriends … at least I saw a lot of them going into his apartment. I never noticed them leaving, I guess now I know why. One of them was here the other day, pounding on his door. She was cheap looking. Bleached blond, lots of makeup. Angry that he had stood her up … I guess she was lucky he did. You don’t suppose she … I mean, I don’t think he answered the door, but …”

“Hell hath no fury as a woman scorned,” the officer said. “We’ll look into it, but he appears to have been dead for about a week. Could be why she was stood up.”

He stood to leave and Shelly asked him if he’d like to take some cookies. “As a thank you, for all that you do.”

“Double chocolate and almond, my favorite. She reached for her cookie jar. She smiled when the officer… Robert … said they were the best he’d ever eaten. He left but she thought she might hear from again. He’d asked for her number.

The phone rang. It was the super. Mrs. Miller, the old woman, had complained to him about the crying. He understood, babies cry, but, “If I’m going to choose to get rid of one of my tenants, it’s not going to be the one who’s been here for twenty years and hasn’t been causing problems since day one.”

“But you let a serial killer live next door to me and my baby?”

“That was unfortunate Miss Warner, but he never caused me any trouble. Keep your baby quiet. If I get one more complaint, I’ll have to evict you.”

“That is unfortunate.” Shelly hung up the phone and went into her kitchen. When she was upset, baking always helped. Double chocolate chip, almond cookies. She gathered her ingredients, then reached in the cupboard and pulled out her extra special ingredient. While she baked, she hummed her version of a lullaby."Hush little baby, don't say a word, mamma's gonna kill a mocking bird. If that nosy bird don't die, mamma's gonna mamma's gonna give it another try ..."
Posted by Lisa at 5:09 PM