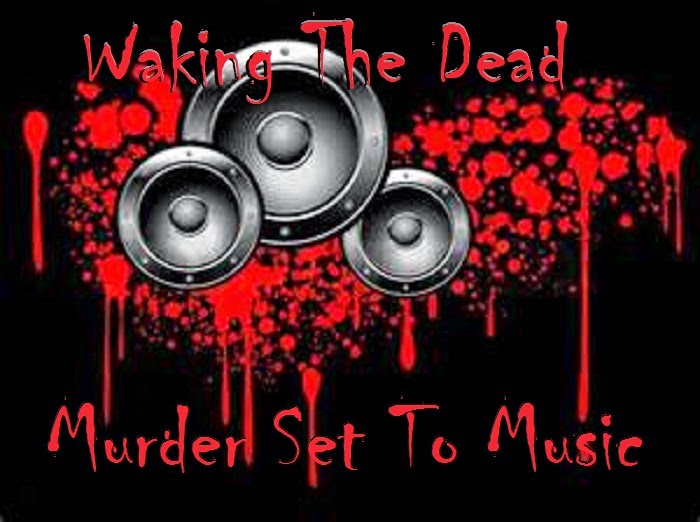 Althea pounded on the ceiling with the end of the broom. “Scarlet, turn that music down.”
The whole house vibrated as the volume went up.

“I don’t know what I’m going to do with that girl. Stephen, will you go up there and tell her to turn it off?”

“Because I’m your mother and I said to. I swear, that girl is going to wake the dead with that racket.”
Althea moved towards the stove to continue cooking the breakfast, Scarlet’s music had interrupted, but a scratching at the basement door froze her in her tracks. She stared at the door, confused. The scratching stopped and the knob jiggled. Someone was trying to open the door. That didn’t make any sense. No one was down there … well, except for Grandma and she was dead. Althea had killed her herself.

“Mom?” Stephen asked, coming back through the kitchen door, backwards. Also coming through the door was Casey, Scarlet’s boyfriend. No one had seen him for three months, mainly because Althea had killed him and buried him with the magnolias. She hadn’t wanted Scarlet to know though, and now here he stood, the morning dew dripping from his rotting nose.

“Damn it,” Althea snapped, “how many times do I have to plant your ass?” She picked up the skillet and smacked Casey in the face with it. The eggs went flying across the room, hitting Grandma in the face as she stumbled through the basement door. Casey kind of bent backwards, his back making a sickening cracking sound … rigor mortis is a bitch when you’re dead … and then straightened back up. He smiled at Althea, revealing a row of decayed teeth covered with dirt and maggots. Althea pulled the skillet back, ready to swing again, but the thumping upstairs caught Casey’s attention. He turned, heading back into the living room and towards the stairs.

“Grandma Bertha!” Stephen said, and ran to give her a hug. “We’ve missed you.”

“Speak for yourself,” Althea groused. She’d never cared for her mother-in-law. Ignoring the dead woman, she followed Casey into the living room. He was standing at the bottom of the stairs, trying to lift his leg up to the first step. Althea picked her knitting needles up from the end table. “I warned you to stay away from my daughter.” She shoved both needles into the base of Casey’s skull. He shuddered and then collapsed on the floor. His head hit the railing and splattered brain matter on the carpet.

“Great, now I have to shampoo that.”

The music stopped and Scarlet’s voice came down the steps. “Did you say something, mom?”

“No I didn’t, dear. I’m just making breakfast. It will be ready in a few minutes.”

“No it won’t,” Stephen said. “You splattered it all over Grandma.”

“Saint’s preserve me,” Althea muttered. “Stephen, take your grandmother back down to the basement, while I get Casey back outside.

“I don’t think she wants to go back down there.”

Althea handed Stephen the knitting needles. “I don’t care.” She then grabbed hold of Casey’s feet and began dragging him across the living room and towards the back door, leaving a trail of goo behind. She was thankful for the high fence, Franklin had built. The last thing she needed was the biddy next door to get a look at Casey. She already considered herself the eyes of the world, gossiping and spreading rumors about them around the neighborhood. One of these days … Althea was no friend of the devil, but she often thought about sending him the bitch in tiny pieces. She gave one last heave and tossed ol’ Casey behind some bushes.

“Mom?” It was Scarlet. She was looking out the window. Thank goodness she’d gotten Casey hid. “What are you doing? I thought you were making breakfast.”

“I thought I heard that china cat out here. The damn thing keeps tearing up my garden.”
Scarlet rolled her eyes. “Sunflower is a Siamese cat, mom.”

“Whatever. Just finish getting ready for school … and keep the music down. You’re gonna wake the dead …”

“And I don’t need any more joining the ones you already woke,” she muttered. Althea pointed a finger at Casey, who now was playing dead, perfectly. “Stay put. I’ll come back for you after she’s gone.”  He didn’t even twitch. Althea smiled. Soon, everything would be right as a box of rain.

“Is grandma back in the basement?” she asked, walking into the kitchen. She stopped and Stephen looked at her, a guilty look on his face.  Next to him stood Grandma, and Uncle John. Well, not all of John. Just his body. Stephen was holding his Uncle’s head in his hands. “What did you do?”
“He was stumbling around in the attic, fumbling for his head. When I went to look, he kicked it down the stairs.”

“Why didn’t you just put him back?”

“I know, but he’s still family. We look after family. You said so.”

Althea started to speak, but then she heard Scarlet’s feet pounding down the stairs. “Get him down to the basement with Grandma. Now!”

“Sugar, she’s not like us. She’s still on that golden road. You and I … we see the evil in others and we take care of it. And when it’s our family, well we take care of them, too. But Scarlet, she only sees the good, and I don’t want to ruin that. Now get moving.”

“Mom, guess what!” Scarlet came rushing through the kitchen door, excitement flushing her face. Althea tried to match her joy, but then she saw the dog that trotted in behind her daughter. “Buddy came home!”

Buddy’s lip, what was left of it, curled up in a snarl. Clearly he was still angry with Althea for burying him in that black, muddy river.

Turning away from the dog, Althea picked up the frying pan and put it back on the stove. Quickly she cracked open some eggs, trying to salvage breakfast, and what was left of the morning. Overhead, the ceiling creaked as someone moved across the floor. Uncle John hadn’t been alone in the attic. Stephen stepped out of the basement and leaned against the door, his face pale. The knob rattled. Grandma hadn’t been alone in the basement.

Althea glanced at the eggs, but the eggs weren’t quite … well there were beaks sticking out of the yolk and were beginning to chirp.  “I think maybe we should go out for breakfast,” she mumbled.