Join Us
by Lisa McCourt Hollar 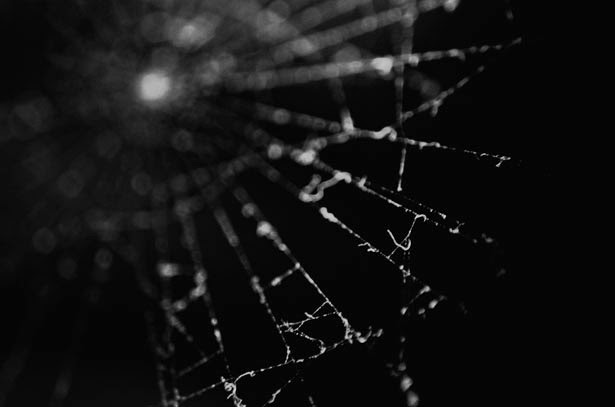 “Joe, get up!” Helen shook her husband’s shoulder, trying to wake him. Joe groaned and rolled over, pulling the pillow over his head.

“Helen, seriously … I worked all night.”

“I know, but I need your help. I went over to Moira Flanagan’s, to check on her …”

Joe groaned. “Not this again. Helen, she is a consenting adult. 85 years old, if I remember correctly, and Old Man Wilson may be closer to a hundred—if I read the write up in the paper correctly—he’s hardly a  pedophile. If they want to shag, leave them be.”

“It’s not that, Joe. I noticed her mail was piling up on her porch …”

“Noticed, as in you were snooping around.”

“Not snooping. She’s old, her family isn’t around, and I worry about her. She’s been acting strange lately.”

“Old people like sex too, Helen. Nothing strange about that.”

Helen yanked the pillow off his head. “Joe, will you please listen to me? The house is full of spiders!”

Joe blinked his eyes open and looked around the room. There wasn’t a spider in sight. “What house?”

“Okay, fine.” Joe pushed the covers back and sat up. He reached for his pants, which were on the floor next to the bed and pulled them on, followed by his shirt. Once he was dressed, he headed for the door, but Helen stopped him.
“You’ll want your gun.”

“Oh for Pete’s sake, Helen, don’t you think a gun for spiders is overkill?”

Joe sighed and then pulled his gun and the holster from the night stand. It was easier to go along with her than to argue. Maybe then she would let him go back to sleep.

****
The walk to Moira Flanagan’s didn’t take long. She lived on the other side of the woods. Maybe it was the ominous way Helen had woken him, or the deafening silence from the ordinarily loud birds, but Joe felt like they were being watched. He shook his head, trying to shake the jitters away, while his hand strayed towards his gun. Helen wasn’t usually so excitable. One of the things he loved about her was her level headedness. The only time he’d seen her lose her cool was when she’d walked in on Moira and Old Man Wilson. He’d tried not to laugh when she’d come running home, horrified at seeing the old woman being taken—apparently from behind—by the even older Mr. Wilson. He thought what horrified her the most was Moira looking up at Helen, her breasts swinging freely while Mr. Wilson continued to pound into her from behind, and smiling, said, “Either shut the door dear and join us, or get the fuck out … Unless you want to watch,” the old woman had added, “you might learn a thing or two.”

“I hope you knocked this time,” Joe said, trying to ease the tension.

“I knocked last time and she’d yelled at me to come on in ... or at least I thought she did. Maybe I misheard. I knocked this time too, but she didn’t answer.”

“So you decided to throw caution to the wind and go in?”

“Something didn’t seem right. The door was cracked a bit …”

“That’s not like Moira,” Joe said. “Did anything look out of place?”

“You mean like all the mutant spiders, and Moira’s dead body?”

“Are you sure she’s dead? Maybe she was sleeping.”

They stepped out of the woods and into the driveway, just as a car came pulling up to the log house. It was Mike, Joe’s partner. He opened the door and stepped out, still in full uniform.

“Geesh Mike,” Joe said, “have you even been home yet?”

“True, but I like to go by there and make sure everything’s okay. Vandals like to strike on the weekend.”

“And that cute, new librarian goes in on Saturday mornings,” Joe teased.

“Jennifer?” Mike asked. “Yes, I suppose she does. It never occurred to me she might be there.”

Mike raised his eyebrows and glanced at Joe. “What’s going on?”

“Helen came over to check on Moira. She says she’s dead.”

“Wouldn’t be surprised. Old woman was farting dust. Sorry,” he said when Helen glared at him, “but she was pretty old. It shouldn’t be surprising that she’s dead … unless you suspect foul play. Maybe Old Man Wilson knocked her up, I mean off, so he could have her money.”

The two men followed Helen up to the porch. The door was standing wide open. Joe stepped inside the cabin and sucked in his breath. Behind him, Mike swore, “Jesus, Mary, and Joseph. Helen, you were here just last week. You didn’t say anything …”

The entire inside of the house was covered by spider webs, some stretching from one wall, all the way over to the other.

“I don’t see any spiders, do you?” Mike was sticking close to the door, ready to run. He didn’t know what size spider made webs like these, and he was sure he didn’t want to find out.

“I only saw one when I was here earlier,” Helen said. “I ran for Joe before I saw any more. One was
enough, but I know there’s more.” She nodded towards Joe’s gun. “You might want to pull it out of the holster.”

“I might want to call an exterminator,” Joe said. “Show me where you found Moira.”

“I hate bugs,” Mike said, cautiously following Helen and Joe down the hall.

“I don’t give a fuck what they are,” Mike said. “They’re creepy crawlies.”

Something moved off to the side and Mike swung his gun towards it. A white spider, about the size of a mouse was scurrying across the wood floor. More of the weird spiders were crawling across the furniture in the room, and along the walls.

“I think I found your arachnids,” he whispered.

“Over here.” Helen led them towards a room further down the hall. It was Moira’s bedroom. The elderly woman—or at least Joe assumed it was Moira—was lying in bed. Her body was cocooned in spider webs. Nothing of his neighbor was left visible.

Crawling over Moira were more of the freaky looking spiders. Some of them were the same size as the one they’d seen in the other room, but others were larger, along the size of a small dog. The spiders stopped moving when Mike spoke, turning so that they were looking at the three intruders.

“I think maybe we should leave,” Mike whispered.

“Sounds good to me.” Joe took Helen’s hand and turned to leave the room. It was then that the three found their path was blocked by more creepy crawlies. Not the spider creepy crawlies, but giant beetle, creepy crawlies. The bugs, slightly smaller than the spiders, were lining up like soldiers ready to do battle. Helen screamed.

“And there are the bugs,” Joe said, drawing his gun.

The insects advanced. Behind them, the spiders scurried towards them. Then Moira sat up, the spider webbing falling from her body. She was a younger version of the Moira Joe knew, her body no longer sagging, but taut—alluring.

She rose from the bed and the spiders, which had been advancing, parted to allow her past.