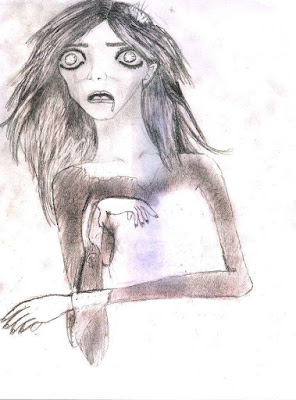 We were starving. It had been days since we’d eaten. Our horde had grown and joined with other hordes. There seemed to be less and less of the living and more and more of the dead. More dead meant more mouths to feed. I was depressed. I wanted to die. Really die. I thought about giving up, like others had done, and collapsing on the ground. I could allow myself to rot—decompose—in the sun. We passed one fellow that had a tree growing through him. Being part of nature might be nice, if the hunger would just stop. It didn’t though. And I had Corbin and Anna to think about. They needed me. I gave the tree zombie a longing look, but I trudged on.
Overhead the vultures circled. They recognized we were dead, but they wouldn’t try to land. It only took a few times for them to learn that their food would bite back, if not careful.
A moan began to form among the horde, traveling in waves from the front to the back.
“Breathers. There are Breathers ahead.”
The excitement ran through the masses.
“How many?”
“Are there enough for all of us?”
“Just more damn mouths to feed.”
“Food, there’s food up ahead!”
“Mommy, I’m hungry.”
And we kept moving, hope and hunger prodding us along.
The breathers fought back. Machine guns, tanks … even grenades were lobbed into our midst. Randy walked ahead of us, Cheryl by his side … yes, that Cheryl. He had betrayed our marriage vows with her in life, and now he betrayed them in death. I smirked when a stray bullet took her head off. Brain matter splattered on Randy. My grin widened, nearly unhinging my jaw. I pushed it back in place as best I could. I wouldn’t be able to eat if I couldn’t chew.
The horde moved on, our hive like mind urging us forward.
“Food … people … flesh … sustenance …” The murmur traveled through our group, while more and more of our horde fell to the ground. Even then, those whose heads remained intact—or mostly intact—would continue on, crawling, or dragging themselves forward. “Sustenance … food … flesh … hunger … people … sustenance …”
It was our routine. Day in, day out, some would fall, others would go on. More would join us.
It began to rain. Hard. The dirt quickly turned to mud.
“Try to keep up,” I moaned, urging Anna forward. We stepped over some of ours and kept going. The mud pulled at me feet and I struggled to keep upright. The vultures continued to circle. If I went down, they would wait until the horde moved on without me and then attack. Randy took hold of my arm to help me along … or tried to. My arm came off in his hand. He shrugged. It was the last thing he did before a bullet went through his head. He and my arm landed on the ground next to Cheryl.  At least the vultures would get something to eat.
Something in me snapped.
“STOP!” I screamed. Those close to me turned, puzzled. Among them was the suit zombie who used to lead us. He no longer looked so important. He was missing an arm and his jaw hung awkwardly, partly unhinged from his face. One of the newer zombies—a former governor—had taken over.
“We can’t stop,” he said. “We have to feed.”
“We will die. They have too many weapons.”
“We outnumber them,” he said. “They will fall.”
“Maybe, but how many of us will fall along with them. I have my children to think about.”
“I’m hungry,” Anna said. She looked longingly after the horde. She moved to go after them, but Corbin stopped her, pointing at what remained of their father. “Daddy!” Anna sobbed.
“This is how we survive,” Suit Zombie said.
“No, this is how we die.” I thought for a minute, thinking. There had to be more than our hive mind. There was more to surviving than eating. We had to be more than instinct. I looked around.  And it came to me. I turned to leave the road … to leave the horde. “If you want to live, follow me.”
I led my family off the road, while most of the dead surged ahead. A few from the horde followed me, including Suit Zombie. I knew there had to be something more than hunger, some reason we were driven to live, even after death. There had to be a purpose for our existence. I recalled the priest. He had said we were an abomination … the devil’s children. But he was dead and I was still here. My children were still here. No, we weren’t evil. I didn’t feel evil. When the lion takes down the gazelle, the lion isn’t evil, he is just doing what lions do. I glanced up at the vultures that always seemed to be circling, waiting for one of us to drop.  They were probably the most surprised by the apocalypse. When something dies, they eat it. Then one day their food bit back. Still, they circle. Vultures gonna do, what vultures gonna do. And a zombie is going to eat the living, but hell if I was going to walk into bullets and grenades to get a bite to eat. I was pretty intelligent when I was alive. My brain might have been rotting, but it still had a few good cells left.