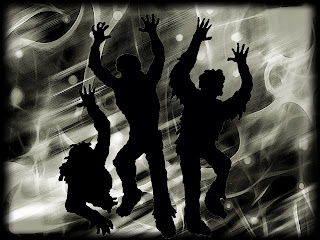 Johnny always seemed to just get by in life. He stayed out of conflicts, didn't speak up, and when he caught his wife in bed with another man, he waited for them to finish before confronting her about it, if confronting her is what it could be called. The conversation consisted mostly with Johnny agreeing with her that he was lousy in bed, unimaginative, and too quick to the finish line.

"I need more," she said, and more meant Tom Hullinger. He was married too. His wife was in the Hospital where Betty was a nurse. Betty didn't want to leave Johnny, she just wanted an open marriage. She could see whomever she wanted, and Johnny could see other women too, if he so desired; Perhaps Tom's wife, she was in a coma, so not likely to notice his inadequacies.

She kissed Johnny on the forehead then, dressed for work, and left. Johnny found his gun and put it to his head. Thing is, the safety was on and having never used the gun before, (he only bought it to make Betty happy, because according to her, a real man owns a gun,) he didn't know how to take it off. So he set it on the table and popped open a beer. Maybe getting good and drunk would give him the gumption he needed to stand up for himself.

Two beers later, Johnny, who also was never a drinker--the beers were Betty's--set off for the hospital. He had a few things he wanted to say to his wife.

The hospital was in chaos. Apparently there had been an accident involving a school bus and several cars.

"Johnny, what are you doing here?" Betty asked.

"I wanted to talk to you." His words were slurred and he leaned into her, breathing his alcohol laced breath over the love of his life.

"Have you been drinking, Johnny?" She stepped back and looked at him. His eyes were glassy and he was leering at her like a drunk teenager at the prom. She shook her head.  "I only had 2 beers left and I was looking forward to those. You better replace them, and not with the cheap shit you bought me the last time."

Betty tried to step around Johnny, but he had a mission, he wanted to show his wife he could satisfy her as much as any other Tom, Dick, or Harry. He grabbed her arm, intent on pulling her to him and kissing her passionately. What actually happened was he grabbed her arm and she pulled away from him. He had a pretty good grip though, which surprised Betty. Johnny had never been particularly strong. When he had courted Betty, she'd only been interested in making Doug Benfield jealous.

He was the star quarterback of the football team and had been her boyfriend. Then she caught him kissing Jenny Cowan. Johnny was the only one left to take her to prom. He wasn't a football player, but he was the water boy, so that at least had to count for something. It didn't and she knew it. Instead of making Doug jealous, she'd made herself look pathetic. She was going to let Johnny down easy after the prom, except somehow she'd gotten herself drunk and woke up the next day in bed with Johnny. What's worse, a few weeks later, she'd missed her period. A few months after that, at the insistence of her dad, she'd married Johnny. The day after that, she had a miscarriage, but she was stuck. Her daddy was a preacher, he'd never allow her to divorce Johnny. She'd made her bed when she shagged him.

Betty tried to pull her arm loose, but Johnny held on as though his life depended on it. She yanked harder, finally freeing her arm and falling backward against her cart. The cart tipped over and medicine and needles went flying everywhere.

"What the hell is wrong with you, Johnny?" Betty stood up, feeling somewhat woozie. She'd hit her head on the floor and when she reached up to touch it, she felt something sticky. Then she collapsed to the floor again. This time she didn't get up.

"Johnny, what did you do?" It was another nurse ... Linda, Johnny thought. She bent down and felt for a pulse.

"I just wanted to kiss her," Johnny said.

"I didn't mean too." Johnny stared at his wife for a second and then, when he heard Linda calling for security, he turned and ran.

"NO!" Something snapped at that moment. Johnny, who had never stood up to anyone, knew that he would be arrested and found guilty. He'd caught Betty in bed with Tom. It would look like be had killed her in a crime of passion.

Still, he didn't know where to go. He took the elevator and hit the button for the basement. Maybe be could hide out there for a while.

Turns out, the morgue was in the basement. Johnny had just decided that maybe he should find someplace else to hang out, and was getting ready to push the button to bring the elevator back down, when he saw it was already on the way. He looked around and saw a closet across the room. Moving quickly, he hid himself just in time. Johnny watched through a crack between the door and the frame as an orderly stepped off the elevator. Behind him, he pulled a sheet covered gurney. An unidentified shape lay underneath. The orderly pushed the cart next to a table, then pulled the cover off, revealing that it was Betty who lay beneath the sheet.

Johnny watched in horror as the man unbuttoned Betty's uniform and fondled her breasts. A rage built inside of him. Not only was she unfaithful to him when she was alive, she couldn't keep her marital vow in death, either. Johnny was about to fling open the door and confront the fiend, when the walkie on the Orderlies hip cracked to life. There was some kind of emergency upstairs and he was needed. Did they say something about the accident victims attacking the other patients?

The orderly left, after re-buttoning Betty's uniform and covering her again with the sheet. Johnny stepped out of the closet and went to look at his wife. She was beautiful, even dead. He regretted that he had never been the man she'd wanted him to be. He knew she didn't love him, had always known, but he had loved her and never had the courage to let her go. Maybe if he had, she'd still be alive. A tear fell from his eye and landed on her face. Then another one fell, this one landing on a closed eyelid. Betty's eyes fluttered open and Johnny screamed, startled by the intense blue of her eyes. Mainly because her eyes were brown, or he thought they had been. Now he questioned his sanity.

Johnny wanted to run to the elevator, bring someone back down, show them his wife was still alive--he wouldn't have to go to prison for murder--but Betty had hold of his arm. He looked down at her, joy swelling inside his chest. Her mouth was moving and she was trying to lift her head to his. Her other hand came up and touched his face, caressing him. He lowered his head toward her to finally kiss her the way she deserved. It wasn't until she ripped his tongue out of his mouth that he realized his mistake. Betty wasn't alive after all, and soon, neither would he. As in life, he didn't fight back. He let Betty eat until he took his last breath. He loved Betty, and if he couldn't satisfy her in life, maybe he could in death.
Posted by Lisa at 8:42 PM