Not really a Halloween story, but it does involve disguises, and horror. Enjoy! 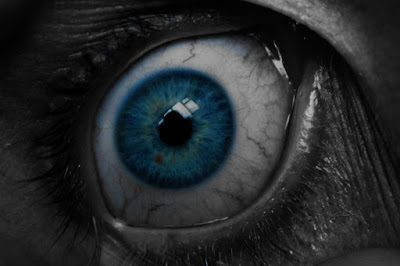 “The pigs, the pigs!”
“He screams that over and over, doctor.”
“Could be a reaction from being hauled in here by the police; I’ve never cared for them much myself.”
Nurse Sally rolled her eyes at Doctor Stanton’s attempt at humor. The two were standing outside of a locked door, staring in at the man sitting in the corner. His arms were restrained by the straight jacket, an attempt to prevent the patient from harming himself as well as the staff at the mental institution.
“What was his demeanor when they brought him in?”
“Agitated. He was howling … you know the type.”
“There was a full moon last night.”
Sally chuckled. “Since he wasn’t hairy and his teeth are missing, I think it is safe to assume he’s not a werewolf.”
“Tell me about the teeth,” Stanton said, looking at the chart. “It says that his mouth was bloody and it looked like his teeth had all been pulled out recently.”
“A butcher job. It looked like someone had taken a hammer to his mouth.”
Inside the room the man tilted his head back and howled, a long mournful sound that sent chills through Nurse Sally. She’d seen patients that thought they were werewolves before, but something about this John Doe seemed… different. He howled again, then looked towards the window she and Dr. Stanton were observing him through. Shuddering, she took a step back. For just a moment there was something in his eyes, something that was almost animalistic. Then it disappeared and he let out a slow sob before screaming again. “The pigs! The pigs!”
“This case isn’t that unusual,” Dr. Stanton said, making some notes in the chart. “Give him the usual cocktail and we’ll see how he is tomorrow. Moving on…”
Sally followed the Doctor down the hall to the next patient, a woman who thought she was Marilyn Monroe. Looking behind her before they entered the room, making sure the security cameras in the hallway had been disabled. Dropping a card on the ground, she shut the door… Marilyn would keep Dr. Stanton busy long enough for her brother’s to get the job done. She was just glad she’d been working when the police had brought in their newest patient.
As the door closed, three orderlies came around the corner.
“Here it is, just as she promised.” The fattest of the three bent, his breath coming in short gasps from the effort of bending. Retrieving the key card from the ground he and the other three made their way to John Doe’s room.
“This seems a little too easy,” the shortest of the three said as he stared through the small window. “Like taking candy from a baby… where’s the sport in that?”
“Where’s the sport…” the skinny one slapped him on the back of the head. “Don’t forget, he tried to kill us first.”
“Hush it you two.” The fat one took the card and held it against the key pad. The red light changed from red to green as the lock made a soft clicking sound. Pushing the door open the three orderlies skulked into the room.
Against the wall, John Doe shrank back, a small whimper crossing his lips before he screamed.
“Hey Frank, look… I think he’s trying to change.”
The fat one chuckled, “Won’t do you any good Thomas. The wolfs bane we shoved down your maw will stop you from shifting. It also makes you act a little insane, right Toby?”
“Let’s just get this done,” Toby said. “And let’s try not to flub it up this time by letting him get away.”
“Where’s he going to go,” Stubby chuckled as the three morphed into pigs. Their teeth jutted out, sharp and jagged, canines that would rival any wolf’s glimmering against the light.
“You should have just stayed away, Thomas. We don’t like the taste of wolf blood, but we’ll drain you just the same.”
Thomas howled again, his eyes flashing between wolf and human. If he could just change, but the wolfs bane was still in his system and the pain was too much. Looking past the pigs he looked down the hall. They’d left the door open, maybe someone would see him. Then he did see movement… a flicker of red. Then Stubby’s head exploded as a stake shot out from the back of his skull. The vampiric pig turned, snarling at the girl.
“Ooops, I missed,” Red grinned, already loading another stake into her gun.
The pig tried to dodge, but was slow from the damage to his head. This time it landed where she intended, piercing the dead heart of one of Grandma’s killers. Then she took aim at the other two.
Frank ran straight at the girl. Dropping her gun, Red grabbed a stake from her basket and slammed it into his heart.
“Mmm, bacon,” she said. Smiling slyly at the one remaining pig she bent her finger, wiggling it. “Here piggy, piggy.”

Nurse Sally stepped into the hall, straightening her top. Dr. Stanton followed, a little dazed. Sally wiped a lingering trail of blood from her mouth.
“I’ll go get that cocktail you ordered for John Doe.”
“Yes, that would be good,” Stanton said, his confusion beginning to clear, a false memory forming in his mind. Nothing unusual had happened in the patient’s room. Turning he headed in the opposite direction of the nurse and was just beginning to turn the corner when her screams reached him. Running back down the hall he found Sally standing outside of John Doe’s room, a hand covering her mouth. The patient was no longer there, his straight jacket lay shredded in the middle of the room, along with the bodies of three of the orderlies.
“How did he…”
“He never finished his question. Sally ripped his head off, her anger at her brother’s death fueling her rage. She guzzled the blood as it spurted out. She would find Thomas and Red and when she did she would avenge their deaths. She had an idea of where they might go next. Vampire hunters were so predictable… they would be looking for their next victims and Hansel and Gretel didn’t live far from here.