Continued from Temple of Gah.

This is chapter 4 in my MG/YA Zombie series, You can read it from the beginning in Death and Zombies. 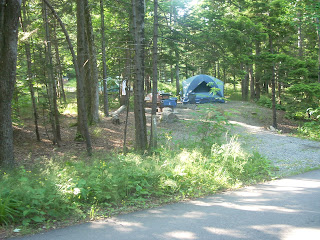 Camp Little Foot was a campground about 5 miles out of town. It was only open during the summer, so it seemed logical that it might not be overrun by zombies, at least not yet. Darlene pulled up outside and stared at the lock wrapped around the gate.
“How do we get in?”
“I don’ know. Do you know how to pick a lock?” Jason asked.
“No, I don’t know how to pick a lock,” Darlene said. “I’m a high school student, not a thief.”
“You don’t have to be a thief to pick locks. Magicians know how to pick locks. My uncle was a magician. He used to pick locks all the time. It was real cool. He’d have someone lock him in a trunk or a closet, something he couldn’t get out of. He always did though. One time they handcuffed him …”
“I don’t think we have a magician in our trunk,” Darlene said. “Steve, did you put a magician in our trunk?”
“Nope, no magician. We do have a bolt cutter though.”
“That will work.” Darlene stepped out of the car and went to check the trunk. A few minutes later she approached the gate with a bolt cutter in her hands.
“A good magician could pick that lock in under two minutes,” Jason said.
“We don’t have a magician!” Darlene screamed, losing her patience. “We don’t have your uncle with us, who I am sure is a really super cool magician, but honestly, right now he is probably a zombie. Maybe if he’d had bolt cutters, he’d be alive!”
Darlene turned toward the gate and opened the bolt cutters. She was just about to break the lock when a booming voice stopped her.
“Hey, hey  … what do you think you’re doing? Get away from there with those.”
Darlene looked around, confused. She didn’t see anyone. The voice was coming from a loud speaker.
“If you need in, all you need to do is ask.” This time the voice was closer. Darlene saw a man with a bullhorn walking toward her. She recognized him. It was Hal Thompson, the camp caretaker. He must stay at the campgrounds all year.
“You cut off that lock,” Hal said, “when the zombies get here, they’ll just start pouring in.”
“My mom told us to meet her here.”
“I know that. She called to let me know to keep an eye out for you and your brother. I imagine they’ll be others too … people looking for a safe place to stay.  Won’t be safe for long though. People start coming, the zombies will start coming too.” Hal unlocked the gate and opened it wide, so that Darlene could pull the car through. Once they were in, he locked the gate back up and instructed them to pull back toward the community building. “We’ll talk in there. Hopefully your parents will be along soon.” He eyeballed Jason, suspiciously. “I thought your parents only had two kids.”
“This is my friend, Jason. His parents are zombies.”
“Oh. I’m sorry about that.”
“Don’t be,” Jason said. “I think they’d like being zombies. Zombies are better than aliens.”
“Um sure, if you say so,” Hal said. “Anyway, we’ve got to figure out what’s going on. This started out as a normal day, and then wham, zombies all over the place.”
“All it takes is one to start an epidemic,” Steve said.
Jason nodded. “Death fell down on the job.”
“Not this again,” Darlene moaned. “Death is not a living thing. He’s just a myth. When you die, no one comes to take you away. You just die.”
“Then how do you explain zombies?” Jason asked.
“Says the kid whose parents believe in aliens.”
“Aliens are real,” Jason said, “they just have no interest in us.”
“So you believe in this Gah?” Darlene asked.
“Heck no. My parents are crackpots.”
“Crackpot zombies,” Steve said.
“Yeah. I hope they’re happy.”
“I wonder what happens to zombies after they die,” Steve mused. “If Death didn’t come for them before they became zombies, who comes for them after?”
“Does it matter,” Darlene asked.
“Yes,” Steve yelled, “because if Death took a holiday, overslept, or whatever else has kept him from his job, we need to find him and make him clean up his mess. Today is Halloween. I wanted to go trick or treating, eat too much candy, and go to bed with an upset stomach, not have to fight my way through the undead. I even had the perfect costume. Special effects and ever … everything …”
“Find Death,” Darlene scoffed.
“The perfect costume,” Steve repeated. “I was sure to win.”
“I just thought of something,” Jason said. “What if Death has died?”
“He can’t die, at least I don’t think so, he’s death after all.” Steve said. “Maybe something happened so he couldn’t do his job.”
”Like what?”
“I don’ know … maybe someone took his robe. And his scythe.  That kooky guy who was asking about me, what did he look like?”
“I don’ know. Kind of skinny. Weaselly looking.”
“Was he wearing a robe?”
“No. Boxer shorts and a t-shirt. His shorts had hearts all over them. Really kookie thing to be wearing outside, even on Halloween.”
“Jason, Death’s not dead, that Gah guy was Death, and I know what he wanted from me. My Halloween costume.”
“Steve, you didn’t! You snatched Death’s clothes?” Jason was looking at his friend with a renewed awe.
Hal looked at Darlene. “Are they serious?”
“I’m afraid so.”
“So super cool,” Jason whispered.