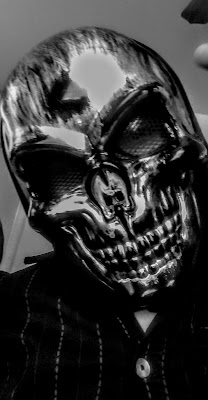 Darlene was annoyed. Something was tickling her feet. She kicked her foot and rolled over, clutching her pillow. Darlene sighed, trying to get back into her dream. Daniel had been kissing her. She felt the tickle on her foot again. “Stop it,” she mumbled, tossing and kicking her foot again. This time something grabbed her foot and yanked. “What the …” Darlene opened up her eyes and screamed. Standing over her was a dark figure wearing a skull mask. She threw her pillow at it before she realized what was happening.
“STEVEN! GET OUT OF MY ROOM!”
Her brother pulled off his mask, laughing. “Come on Darlene, we’re going to be late. You can dream about kissing Daniel Griffen later.
“I don’t dream about kissing Daniel,” Darlene said.
“Oh Daniel,” Steve said, picking up Darlene’s pillow and burying his face into it, “Kiss me again.”
“You better watch it,” Darlene warned, “or I’ll tell Sheila Young that you have a crush on her.”
“Eww, I do not.”
“But she’ll think you do …” Darlene shut the bathroom door, a satisfied smile on her face.
It was Halloween. All the elementary kids got to wear costumes to school and have a parade through the halls. Steve had been planning his costume all month. He was Death. He also didn’t want to be late. Death was never late. It wouldn’t look good for him to show up late. Darlene however was the queen of late. She never got up on time, and took too long getting ready. He continued to hound her through the door.
“Who do you think is going to win best costume? It was Johnny Farmer last year. He went as a space pirate, but his parents were rich and put a lot of money into his costume. He had special effects and everything. I’m glad they moved. Now I just have regular kids to compete against. Death is a pretty good costume, doncha think so Darlene?”
“It’s ok,” Darlene said, coming out of the bathroom.
“Just ok,” Steve said, “Death is the perfect costume for Halloween. Do you know what you get without Death, Darlene? Do you? Zombies. That’s what you get, and you don’t want Zombies Darlene. That’s why Death can never be late. Let just one person die without collecting their soul, and you have an epidemic on your hands.”
“You know you’re weird, right?”
“That’s what makes me special.”
“Yeah, you’re special alright. Come on, let’s get going.”
Darlene grabbed an apple out of a bowl and headed for the garage door. Steve picked up an apple, looked at it, put it down and went for a prepackaged cupcake in the cookie jar instead.
“You know you’re going to rot your teeth out,” Darlene scolded. Steve shrugged and grabbed a second cupcake for later. Last year someone had gotten it into their heads that candy was bad for kids, and there was nothing but healthy food at the schools Halloween party.
Inside the car, Steve buckled up, but continued his rambling about Death and zombies. “There are two types of zombies, fast and slow. You don’t want fast zombies—hard to outrun. Slow zombies, you at least have a chance with, unless they all pile up on you at once. If that happens, it doesn’t matter how fast you run, they’ll overwhelm you. The smart zombies do that.”
“Smart zombies,” Darlene asked. “Aren’t they all just pretty mindless? I mean, they just go for the food, right?”
“Yes, but the smart zombies can set traps.”
Darlene started the car and hit the remote to open the garage door. As it went up, she put the car in reverse and began to back out.
“That’s why Death is so important. You get a smart zombie, he can create more zombies and then humanity doesn’t stand a chance.”
“But what if he does miss collecting one soul” Darlene asked, “Death can’t be on time for everything. That’s impossible. Doesn’t he get a do-over?”
“There are no do-overs in the Z. A.,” Steve scoffed.
“I’m just saying, that’s a lot of stress to put on one being. Maybe Death needs to have some minions to help him collect the doomed.”
“They’re not doomed, they’re dead. Unless Death misses them. Then they are undead.”
Darlene shook her head, glanced in the rearview mirror and slammed on the brakes.”
“What the heck, Darlene?”  He stared at his sister, cream filling and cupcake all over his face.
“It’s Mr. Wilson,” Darlene said.
Steve looked out the rear window. Their neighbor was on the sidewalk at the end of their driveway. He was just lying there, not moving.
“Do you think he’s dead?” Steve asked.
“I don’t know. Stay here.” Darlene got out of the car and went to see what was wrong. Mr. Wilson was elderly. She hoped he hadn’t fallen, but she couldn’t think of any other reason he’d be on the ground. When she was little, they’d lived in an apartment building and their elderly neighbor had fallen outside. No one was around and she’d died while she lay there, helpless. Darlene’s heart pounded in her chest as she bent over Mr. Wilson. His head was moving. Darlene breathed a sigh of relief.
“Mr. Wilson, are you ok?”
Mr. Wilson was trying to push himself up off the ground. The angle of his leg looked funny and Darlene thought that he may have broken his hip.
“Try to stay still,” Darlene cautioned, “I’ll get some help.” Glancing across the street, Darlene saw that Mrs. Ayers was outside. She was always working in her garden, and was on her knees in the middle of her tulips.  She didn’t seem to be pulling weeds, or digging in the dirt though. She looked like she was eating something.
“Mrs. Ayer’s …” Darlene took a few steps toward her neighbor and stopped. The woman was chowing down on something, and that something, upon closer inspection, was Petunia, Mr. Wilson’s cat.