This is chapter 5 in my MG/YA Zombie series, You can read it from the beginning in Death and Zombies. 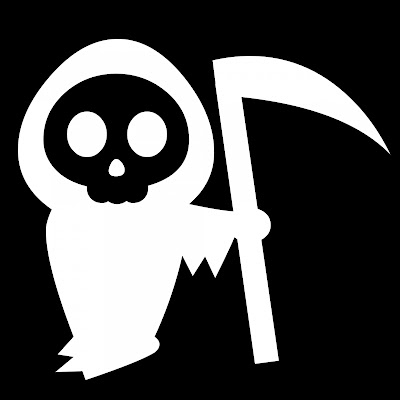 “Let me get this straight,” Darlene said, “you think that your costume belongs to Death? The costume I saw mom buy for you at the dollar store?”
“No. Mom bought me a mask and a cheap plastic knife. Death doesn’t use a knife. He has a scythe. So, I got a scythe.”
“You’re making this up,” Darlene said. “I saw you this morning, you didn’t have a scythe or a robe.”
“They’re in my backpack. I wanted it to be a secret, until it was time for the Halloween parade.” Steve got up and went to the car. When he came back, he had his backpack with him. He opened it and pulled out a black robe, followed by a scythe.  Darlene’s mouth formed an O as her brother pulled the weapon from the backpack.”
“How did that fit in there?” Jason asked, peering into the bag where the scythe had been. There was no way it could have possibly fit inside, yet Steve had pulled it out of the bag, much the same way his uncle would pull an impossibly long kerchief from his coat pocket.
“A more important question is, where does a 9 year old boy get a scythe?” Hal asked.
“I found it. Honest,” Steve said. “It was just there … by the lake. No one was around, and when I tried on the robe, I knew it was meant for me.”
“It wasn’t yours,” Hal said.
“Finders keepers,” Steve argued.
“Possession is one tenth of the law,” Jason agreed.
“And you didn’t stop to wonder how it had gotten there?” Hal asked.
“I thought about it and it just seemed to me that the universe was rewarding me.  I wouldn’t have taken it, if I’d known it belonged to Death.”
“And when was this?” Darlene asked.
“The day after mom bought me the mask.”
“Death hasn’t had his scythe for a month!” Jason exclaimed. “No wonder everyone’s zombies.”
“I wonder who was the first?” Steve mused.
“Maybe Alfie Miller?” Jason suggested. “I saw him a few weeks ago and he looked like he could be dead.”
“He always looks like that,” Steve said.
“Hey, did you touch anyone while you were wearing the robe?”
“No. Why?”
“Just thinking that maybe you might have been responsible for the first zombie. Death kills anyone he touches and you were wearing Death’s robe.”
“Death is not real,” Darlene said. “I don’t know what this is, or how you did it, but it’s just a costume. The scythe probably folds up or something. It’s not even real, owww, what the heck, that’s sharp!” Darlene had tried to take the scythe from her brother and had cut her finger on the blade.
“Careful,” Steve said, “it’s sharp.”
“Steven Barnabus Quincy, if there wasn’t a zombie apocalypse going on right now … just you wait until mom finds out … dad’s gonna …” Darlene’s voice trailed off. She didn’t know what to say. The reasonable part of her that knew everything, since after all, she was a teenager and teenagers know everything, knew that Death, the Grim Reaper, the angel of death, or whatever else you wanted to call him, wasn’t real. But neither were zombies, and she knew that they were real. And the scythe? She couldn’t explain that, so the unreasonable part of her that was also a teenager, because teenagers can be irrational too, and angry, glared at her brother and said, “You do you realize that you probably caused all this?”
“Well that’s dumb,” Jason said. “Death is the one that left his robe and scythe lying around. Anyone could have taken it. He’s lucky it was Steve, at least he’s semi responsible and knows how to take care of things. We’ll just give it back and then Death will          make everything all right again.”
“No, she’s right,” Steve said. “It’s all my fault. I shouldn’t have taken it. Even if we give it back, there are no do-overs. We can’t undo the Z.A.”
“I’m not sure how we would find this Death character anyway,” Hal said. “Where would mythological beings hang out at, anyway?”
The four were still sitting there, thinking it over, when the sound of a horn jolted them from their thoughts. Darlene looked toward the camp gates. There was a car pulled up, waiting to be let in. “It’s mom and dad!”
The group ran for the gate.
“Mom!” Steve threw his arms around his mom as soon as she emerged from the parked car.
“Steve, that was an exhilarating experience,” their mother said. “I didn’t think anything could beat paintball, but battling my way through a hord of zombies was just amazing.  Do you remember Jeannette?”
“The one who got the promotion?”
“Yep. Bashed her brains in. Oh, I know I should feel bad, but she was a zombie and she may have gotten the job I wanted, but she wasn’t going to get my brains. Here, help me get your dad out of the car.” She opened the trunk of the car, revealing their dad tied up on the inside. Their snarling, zombified dad.”

To be continued tomorrow with Death Wears Boxer Shorts.